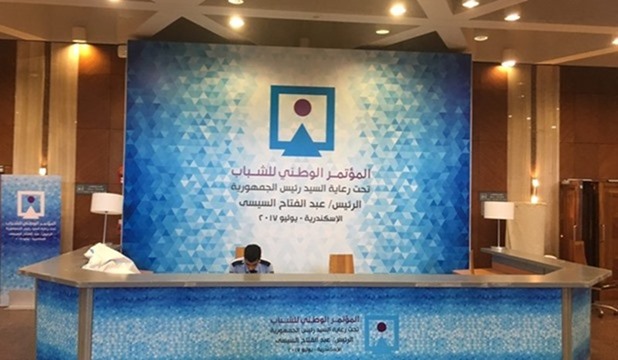 The 4th session of the national conference for youth will take up a host of important national issues.

The event starts on Monday 24/7/2017 at the Alexandrina Bibliotheca with the presence of President Abdel Fattah El Sisi.

Participants include groups of youth along with ministers, senior officials and experts in the fields of economy, education and health.

As many as 1,300 youth from Alexandria, Matrouh, Beheira and Kafr el Sheikh Governorates will attend the gathering.

A workshop will be held during the conference themed "Ask the President" where Sisi answers the questions of the citizens via the official website of the national youth conference.

The session comes within the framework of the president's keenness to open communication channels with the citizens.

The conference will also address the challenges facing the state and solutions to confront these challenges.

President Abdel Fattah El Sisi arrived on Monday at the venue of the Fourth Youth Conference held at the Alexandria Bibliotheca. Prime Minister Sherif Ismail, a number of ministers along with almost 1,300 youth figures from various governorates and universities are attending the two-day conference.

He attended the inauguration of the conference. Verses of the holy Quran were read out at the beginning of the inaugural session. A documentary on recommendations of the previous youth conferences was then played.

President Sisi said that all problems will be probed and solved no matter how difficult they are. Sisi then announced the opening of the conference.

Investment and International Cooperation Minister Sahar Nasr said that her ministry is implementing President Abdel Fattah El Sisi's directives to give priority to youth projects. In press statements on the sidelines of her participation in the Fourth National Youth Conference, Nasr said that the Investment Ministry launched an initiative to establish incubators of youth enterprises. She added the first stage will involve six governorates, while the second one will cover the rest of governorates. The project aims at helping small investors and entrepreneurs, Nasr said, adding the investment ministry is working with other development partners on increasing support for small investors in all governorates.

President Abdel Fattah El Sisi asserted Egypt's constant policy is non-interference in the domestic affairs of other countries. Addressing the "Ask the President" session of the youth conference in Alexandria, Sisi stressed the necessity to combat countries that support terrorism. "Egypt will never backtrack in the fight against terror," the president made it clear. He warned that terrorism has exceeded its regional borders and it must be combated. "Extremism is unacceptable because it runs counter to the natural growth of humans," he said. The president confirmed that the Middle East and Europe will never witness stability if terrorism is not defeated. "The impact of terrorism is not local in one, two or three countries, but it exceeds the region to other regions," said Sisi. He noted that preparedness for combating this phenomenon has increased.

Furthermore Sisi said the recent economic measures were tough, but would have positive results. "We did not have other options but to take such inevitable choices," he added. The government has measures to protect citizens if any economic decision is taken so as not to cause any pressure on them, the president said. The ration card system covers about 75 million citizens, and the person's share has been increased from EGP 15 to 50, he added. Sisi also said that the pensions have been increased last year to hit a minimum of EGP 500 pounds, after it was from EGP 200 to 300 in the past. He added that an exceptional and periodic bonus was granted to those who are not governed by the civil service law for a minimum of EGP 130.

The president said that the social insurance system covers 1,750,000 families, while the Takaful and Karama social safety nets program serves 1,750,000 others. He added that farmers are also exempted from the agricultural tax for three years.

Sisi said civil companies are working in several projects under the supervision of the Armed Forces.

He added that the government is doing its utmost to provide protection measures that are still not enough.

Meanwhile, the president said that the state has been working on fixing the subsidy system since more than two years through a process of completing the databases. He added that the ration card system is the most successful mechanism so far for providing subsidy for all Egyptians with their different conditions.

"Establishing databases at the national level takes time and effort from the state," he said. Sisi also said that the government made an achievement in the issue of electricity as it solved it while combating terrorism.

He added that the other achievement for the government is the giant leap reached in developing the road and bridge system. He estimated the cost of the national road system hit LE 100 billion. The state has made a huge leap in the establishment of social housing units, the president said.

He hailed efforts made by the Housing Ministry in providing social housing units. The state is building 10 new cities, and the Egyptians will benefit from them at an unprecedented time, Sisi said. He expressed confidence in the future of the Egyptian state.

Asked about future social protection measures, Sisi said that the previous steps cost EGP 85 billion, adding that such measures will be improved as long as the financial situation of the state gets better. As for a recent incident of Warraq Island, Sisi said a nationwide campaign removed encroachments on 2 million feddans of agricultural lands and 160 millions of state owned lands. He said that buildings on the 1,400-feddan island had been randomly established, adding that its sewage problem affects the Nile waters. He stressed that no one can encroach people's ownership under laws and the constitution Sisi said he supports central governance during the current stage as pertaining to housing projects.

The president asserted that Egyptians deserve better lives. He said he deals with citizens as one family. Sisi urged the Egyptian people to widely participate in the coming presidential election, whatever the candidate they want to choose. The president affirmed that that he would accept any result of the polls. He added that the whole world should see the will of the Egyptian people.

The Egyptian people challenged the most powerful terrorist organization in the world, Sisi said. "No one will be able to lead the Egyptians against their will", he added. The president pledged not to govern against the people's will. "We are at a difficult stage, and every day we achieve better results," he said. "Terrorists aim to weaken the morale of all Egyptians," Sisi said

The president hailed a recent increase in the foreign exchange reserves with the Central Bank of Egypt to $35 billion. "I hope they will become $350 billion," he said. He asserted that the state "is moving well".  "The current difficulties are the hardest to be shouldered by citizens," the president said, reiterating that "Egypt will become a strong country with a better future." He that a decision to allow fans to attend soccer games again will be taken when security bodies are assured that no more regrettable incidents will happen.

The banking sector is qualified to support youth projects, Sisi said. He added that a large allocation has been made to finance micro, small, and medium-sized enterprises, he added.

The president said that the country has not been able to confront this intellectual terrorism as required so far. He added that the political will is not enough to counter terrorism, which needs a will by all Egyptians to be uprooted. The president assured the people that the state is achieving progress in the problems it addressing.

The president said that by June 30 next year one million feddans will be added to the agricultural lands in Egypt. He said that there is a program to breed one million head of cattle, adding that the plan has no relation with the public or private sector. As for new cities, the president said they meet top standards. They cover all parts of Egypt, he added.

El Sisi arrived at Alexandrina Bibliotheca to inspect its exhibition. The bibliotheca’s Director Moustafa el Fiqqi welcomed the president who was keen to sign the library's visitors' register. The inspection tour preceded the commencement of activities of the second day of the 4th National Youth Conference in Alexandria. Sisi wrote in the visitors' register book that Bibliotheca Alexandrina will have a twin library in Alamein city within two years.

President Abdel Fattah said that no amendment will be done to the educational system unless its success is absolutely guaranteed. Commenting on a speech by Minister of Education Dr Tarek Shawki during the 2030 vision session, the president said the culture of the society regarding education which has been built up throughout the past decades must be taken into consideration otherwise developing education will not be implemented on the ground. The society has to be ready to accept development to offer high quality education to all students, the president said. President Sisi referred to salaries of teachers, saying he is well aware that they are underpaid but the problem lies in available resources.

Minister of Trade and Industry, Eng. Tarek Qabeel, gave his speech referring to the ministry’s efforts to increase industrial gatherings, and improve internal and external investment climate according to planned plans, as well as efforts to reduce trade deficit. Qabil asserted that the ratings of Industrial development and external trade grew at a fast pace according to the planned strategy. The minister said that the ministry's strategy was part of Egypt vision 2030 aiming to make the Egyptian economy competitive, balanced and diversified. He said that many accomplishments were made in different governorates and industrial cities, adding that there is a goal to make the Egyptian economy reach the top 30 economies in the world by 2030.

The Minister of Housing, Dr. Mustafa Madbouli reviewed on Monday the achievements of the urban development sector in the session of “Egypt’s vision 2030”. He stressed that the state aims to double the inhabited area, pointing out that the development plan was designed to implement new housing programs and develop slums and insecure areas.

After that, Minister of Transportation, Dr. Hisham Arafat, spoke about the ministry’s strategy saying that about 2400 km of roads were implemented over the past three years. He noted that for the first time, 5 bridges were being built simultaneously on the Nile. The minister referred to the plans for the development of the railway sector, pointing to the importance of this sector in the sustainability of development.

Dr. Abdel Moneim El Banna, Minister of Agriculture and Agriculture Reclamation, referred to the efforts made in the field of agricultural development through the optimal use of natural resources, increasing agricultural land, increasing crop productivity, increasing product competitiveness and developing climate for agricultural investment. At the end of the session, Prime Minister, Sherif Ismail, spoke about the government’s efforts in the framework of “Egypt’s vision 2030”. He pointed out that the current stage is facing the challenges that have been going on for a long period of time.

The PM stressed that every decision is taken to achieve the public interest both at the current stage and in the future, and that the indicators confirm the gradual improvement in various fields, which will be reflect on the level of living and the progress of services in the next phase. PM Ismail pointed out that the reform will not stop, decisions will be reduced in the coming years, and that the success of the reform efforts is linked to the people’s will to achieve a real breakthrough.