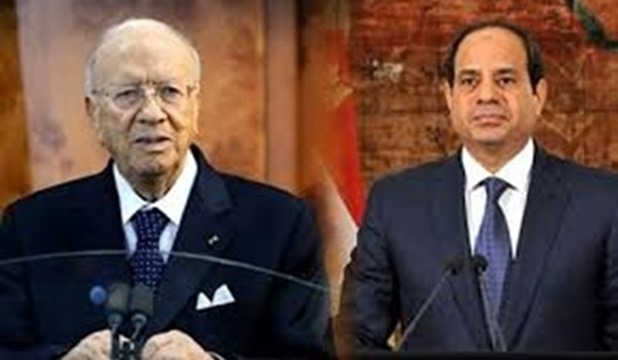 After the success of the 30th of  June revolution and  the election of  president Sisi in Egypt and  president El Sebsi in Tunisia ,the Egyptian- Tunisian  political relations  witnessed  improvement. Mutual understanding is the hallmark of Egyptian-Tunisian relations. The two countries hold identical views with regard to issues related to the Palestinian question, Iraq, Sudan and Lebanon .

Hereinfter, we expose to the most important stations of relationships between the two countries at the political level:-

The Egyptian-Tunisian relations have witnessed a general development especially in the field of combating terrorism, following the success of the 30 June Revolution and the election of President Abdel Fattah Al Sisi as President of Egypt, who  is keen to develop the Egyptian, Arab, international and regional relations after the period of political instability in Egypt since January 2011, and also after the election of Beji Caid Essebsi as President of Tunisia, who in his turn  pledged to develop bilateral relations with Egypt, stressing that Egypt is the cornerstone of Arab relations and must remain so.

After a five-year hiatus, the joint Egyptian-Tunisian committee, chaired by former Prime Minister Ibrahim Mahlab and his Tunisian counterpart Habib Essid, was held in September 2015 in Tunisia to promote joint cooperation between the two countries.

Mahlab has signed 17 agreements and memorandum of understanding with the Tunisian side in various fields, including industry, trade, education, tourism, manpower, economic supervision, radio, television, culture and traditional industries.

On 4/7/2017, the meetings of a joint Egyptian-Tunisian consular committee wrapped up in Cairo. The two sides discussed ways of boosting cooperation in the consular fields to facilitate the affairs of the two countries’ citizens. They also discussed the security, labor and cultural cooperation.

On 20/2/2017, Egypt, Tunisia and Algeria signed on the Tunisia Ministerial Declaration to support the political settlement in Libya.

The relations between the two countries were characterized by coldness during the period of Marzouki’s rule of Tunisia. During this period, the new session of the Egyptian-Tunisian Higher Committee was held under the chairmanship of the prime ministers of the two countries to activate the programs and cooperation agreements, particularly in the economic, telecommunications and information technology fields, and to exchange experiences related to modernizing local industries and increasing their ability to compete against foreign products.

They also discussed ways of cooperation in renewable energy projects, especially in the field of solar, seawater desalination, rationalization of energy consumption, oil, education, scientific research, transfer of technology and cooperation in marketing the two countries' products in the international markets.

Generally speaking ,the  period of the rule of former President Mubarak, which lasted 30 years, was characterized by its interest in the internal affairs on the expense of  the Arab issues  following the so-called political realism, which could not embark with  the  events driven by other parties Arab or foreign. In spite of that, the political relations between Egypt and Tunisia were characterized in this period by strength and understanding being reflected in the similar stances of the two countries on various issues of mutual interest, foremost of which are the Palestinian cause, the Iraqi issue and the situation in Sudan and Lebanon.

The two countries have also been keen to consult and coordinate stances in various international and regional forums to achieve their common interests. For example, the mutual support for the Egyptian and Tunisian nominations in the various regional and international organizations.

In the framework of the bilateral relations between the two countries during this period, we point out the following:

-The establishment of a joint supreme committee chaired by The prime ministers of both countries. It meets annually in Egypt and Tunisia alternately and the round was held in Egypt in 30 June-1 July 2007.

-The  sub-Committees for Technological and Scientific Cooperation, for Religious Affairs, for Technical Affairs, for Tourism, Customs Affairs, for Consulate Affairs and for Transport witnessed  intensive activity during 2005-2006.

-The 10th session of the Political Follow-Up and Consultation Committee was held on March 6-7, 2007 Bin Ali welcomed the Egyptian foreign affairs  minister and the visit had a positive effect on the mutual relations   .

Since 1957, Egyptian-Tunisian relations had been tense specially after the Tunisian opponent   Saleh Ben Youssef  resorted to Egypt and launched an opposition movement against the Tunisian regime.

Later, in 1965, the tensions were increased after Bourguiba's famous speech in the Palestinian city Jericho and his call for dialogue with Israel on basis of the 1948 partition decision of Palestine, which Abdel Nasser considered as an exit of the Arab row.