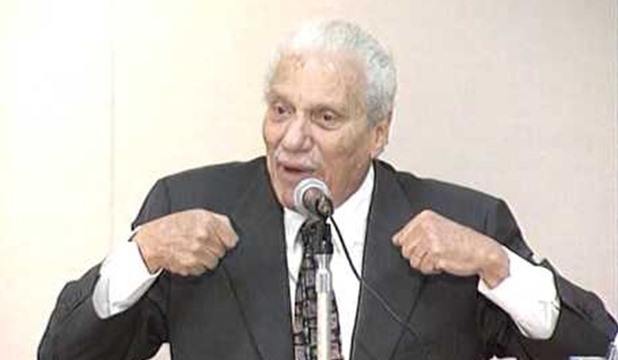 A Prominent Playwright and Intellectual (1923 - 1997) Sa’ad Eddein Wahba, who died in November 1997, was a prominent literary, intellcetual and dramatist, who remained for forty years of his life, actively involved in a variety of fields in art and culture. During his rich career, he produced a wealth of unique, daring contents’ plays. Several of these plays were translated into French and were the subject matter for many Ph.D. thesis at the universities of Sorbone, Moscow and Ain Shams.

Born in a village in Daqkahliya Governorate on February 4, 1923, he completed his study at the Police Academy where he graduated in1949. He served as a police officer until he was promoted to the rank of major. In the meantime, he studied philosophy and sociology at the Alexandria University, where he obtained his B.A. in 1955. In 1956, he resigned from police service to work in journalism, which has been his favorite profession. He issued "Police Magazine" in 1957 and "Al Shi’er" (poetry) Magazine in 1957, of which he was Editor-in-Chief.From 1959 to 1964 he served as managing editor of "Al-Gomhouria Daily" as well as "Al Iza’a" (Radio) magazine. From 1964 to 1980 he worked for the Ministry of Culture in the following capacities:
Chairman of the Board of Directors of the Arab Film Production Company.
Chairman of the Board of Directors of Dar Al-Kitab Al-Arabi for Printing and Publishing.
Chairman of the Board of Director of Atr’s Authority.
Deputy Minister of Culture for Foreign Relations.

First Under Secretary of Culture for Mass Culture. During his tenure, Wahba revitalized this important cultural sector by supporting regional theatrical activities, sponsoring provisional and rural dramatic troupes and organizing provincial dramatic festivals.
Secretary-General of the Supreme Council for the Welfare of Arts, Letters and Social Science.
Deputy-Minister of Culture1976.
He resigned from his government position in 1980.
Elected Dean of Cinimagrapher’s Syndicate in 1979, but he resigned from this post in 1988.
Elected Chairman of Art’s Syndicate Federation (1979-1988 and 1980-1993).
Elected president of the Cairo International Cinema Festival (1995 until his death in 1997.
Elected Chairman of the General Federation of Arab Artists(1986).
Elected President of Cairo Children’s Cinema Festival (1990).
Elected Member of the People’s Assembly for Cairo fifth constituency (1984-190).
Elected Chairman of Egypt’s Writer’s Union (1997).Major Achievements

Wahba sponsored the creation of "Arab Artists Federation" as a symbol of pan-Arab culture, with the purpose of enhancing Pan-Arab cultural ties. The federation, based in Cairo, confirmed Egypt’s pioneering and leading cultural and artistic role in the Arab world. Under his auspices, the Federation produced "Oh My Qods" (Jerusalem) to support the Palestinian Intifadha (uprising) in 1988. It was his intention to present a series of television programmes showing arts in the Arab countries.

Thanks to Wahba’s unceasing efforts, the Cairo International Cinema Festival managed to gain world respect and prestige, due to consummate organization and success in boosting world superstars.

On the domestic arena, Wahba has an outstanding and distinct impact on cultural and dramatic life. Since 1966, he wrote more than twenty plays, chief of which were: Al Mahrousa, 1980 (nickname for Egypt), Assibinsa (Rear-Wagon) , Al Namous (Mostiquo) Budge, Sikket es Salama (Safeway), Yaslam Sallem El Heita Betitkalem (The wall Can Speak), Al Mahrousa 2013, which was his last work.
He wrote more than 200 short-stories.
He wrote film scripts and dialogues for a number of films.
He also wrote television serials and other works.

Order of the Republic of the Third Class, 1955.
French Order of Honour of Public Officer’s class, 1976.
Order of Simon de Bolivar, by the Government of Venzuela, 1979.
Order of Merit of the First Class, 1982.
State Merit Award, 1987.
Order of Science and Arts of the First Class, 1988.
Order of Arts and Letters of a Commander’s Class, by the French Government, the highest to be granted to non-French in arts and letters, 1991.
Order of Cultural Merit, Tunis, 1991.
Order of Merit of Distinction Class by Syrian President Hafez Al-Asad, 1997.

The last of Wahba’s work was a press conference he gave two days before his death on November 9, 1997 announcing the detailed arrangements for the 20th Cairo International Cinema Festival.