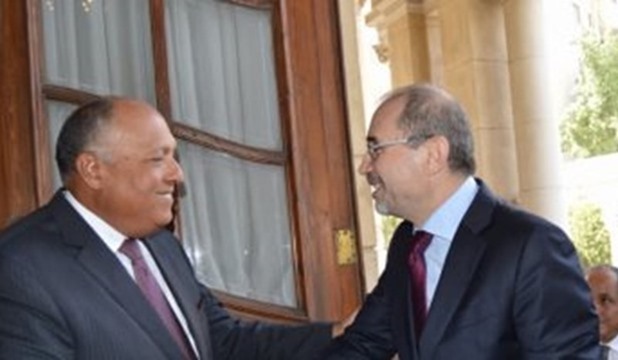 In a joint press conference following their meeting, the two ministers hailed deeply-rooted relations binding Egypt and Jordan, pledging to continue coordination between the two countries.

Such meetings offer an opportunity to mull ways of boosting bilateral relations and putting joint agreements into force, Shoukry said.

Bilateral then expanded talks were held with the visiting minister, reviewing all aspects of Cairo-Amman cooperation and common challenges, he added.

The top Egyptian diplomat said the two countries showed identical stances on all regional issues including the latest developments in Syria, Yemen, Iraq, Libya and the Palestinian cause, affirming the need to move forward under the Arab League's umbrella to reach a two-state solution.

He added that the two sides agreed to continue consultations and coordination, revealing that a similar meeting would gather the two foreign ministers within weeks, whether in Cairo or Amman.

Safadi said the two countries are keen to consult and exchange views in implementation of directives from King Abdullah II and President Sisi to serve our common interests and find solutions to the current regional crises.

There is a joint determination to activate cooperation and consensus reached by the High Joint Committee and remove any obstacles, he added.

The Jordanian minister voiced concern about the lack of prospects for a political solution to the Palestinian cause.

Such situation, harming regional security, needs effective international moves to resolve the conflict on the basis of a two-state solution that guarantees the establishment of a Palestinian state with East Jerusalem as its capital on the 1967 borders, he added.

There must be a clear Arab role to deal with the Syrian crisis that affects us more than others, he added.

The Jordanian minister hailed Egyptian efforts to achieve the Palestinian reconciliation, expressing support to meetings to be held in Sweden regarding the Yemeni crisis.

Responding to MENA question on the Palestinian cause, Shoukry expressed a firm stance of Egypt and Jordan aiming to put and end to the crisis in accordance with the resolutions of international legitimacy based on the two-state solution and the establishment of a Palestinian state on the 1967 borders with East Jerusalem as its capital.

Contacts are made with the Palestinians, Israelis and influential powers, including the United States, China and members of the Security Council in this regard, he added.

Coordination and contacts between Egypt and Jordan continue at all levels, Shoukry said.

Bilateral relations are developing at all levels, including the economic, commercial or investment areas, the Jordanian minister said.

We agree on clear practical steps to activate cooperation, he added

Safadi expressed Jordan's full support to Egypt in its war against terrorism.

On Egypt's upcoming presidency of the African Union, Shoukry said the country has developed programs and initiatives in line with the 2063 Agenda in the areas of development, integration and conflict resolution within the African framework.

All state agencies are participating in the preparation steps upon directives of President Abdel Fattah El Sisi to focus on the continental priorities and intra-African relations, he added.

Asked about the US peace deal in the Middle East, Jordan's Foreign Minister Ayman Safadi said that there was a lack of information on this regard so far, as the US proposal has not been introduced yet.

But Jordan has briefed US on its position for a comprehensive peace, based on two-state solution, with the right of Palestinians to have their own independent state, Safadi stressed.

Concerning the Israeli mounting presence in Africa, Safadi pointed out that Jordan had royal directions, by King Abdullah II, to boost cooperation with African states, in a way serving both Arab and African interest.