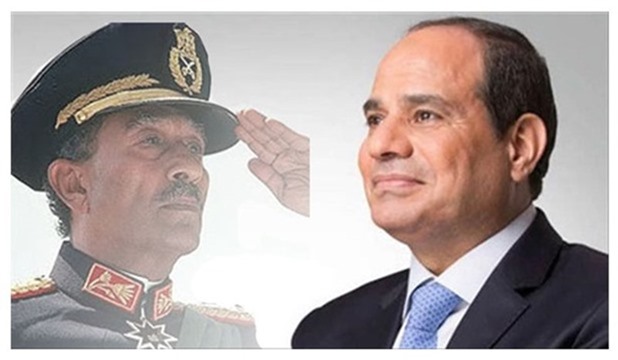 In the Name of Allah, the Most Merciful and Most Compassionate

Today, we celebrate the centennial anniversary of a brave Egyptian man, in whom, the wisdom of the Egyptian time-honored people has been embodied, since he had the courage of decision – taking and vision for the future, so he had deserved his people and homeland and even the whole world’s immortal esteem.

It is the late leader and hero Mohamed Anwar El-Sadat, whose biography will remain a source of inspiration to us and the coming generations.

Sadat took the decision to launch the glorious October War amidst hard circumstances and under huge pressures that didn’t push him to lose his mental and nervous control. He well planned, prepared and arranged politically and militarily as shown by efficiency and ability of our great Armed Forces in a way that led to the victory, which restored dignity and honor for Egypt and Arab Nation.

The war was not a goal in itself. The Egyptian people, who has the most ancient civilization in the history, knows and appreciates the meaning of peace and safety. October War paved the way to Sadat to launch one of the greatest and bold initiatives ever in the modern age and opted for peace to hold all playing parties in the region and world for their historic responsibility.

Sadat, who won Nobel Prize during his lifetime, is still honored and appreciated highly until nowadays.

Sadat’s message to you was clear. It was written by his blood and its essence was that Egypt goes above all and not be conquered, nor accepts injustice or humiliation, and seeks fair peace that is protected by efficient power, and works for development and prosperity for its people, area and the whole humanity.

Being an immortal leader, who paid the last drop of his blood for his homeland, I extend greetings and appreciation to his name and family.

May Allah protect Egypt and its people and render our efforts a success.

Allah’s Peace and Mercy Be Upon You