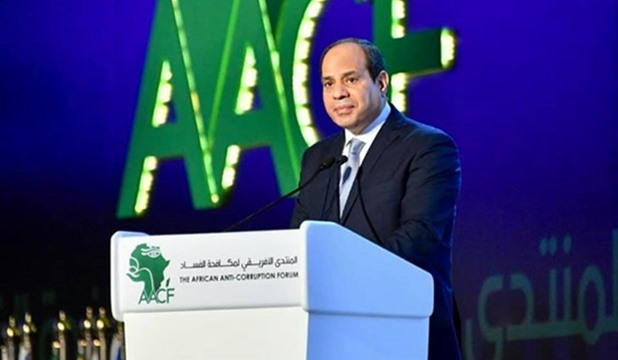 Ladies and Gentlemen Ministers of Justice and Interior and Heads of Control and Auditing Agencies of the African States,

Brothers and Sisters Officials of the African Union and Federation of African Anti-Corruption Authorities,

In the beginning, let me welcome you in Egypt, and extend my thanks to your keenness to participate in the first African Anti-Corruption Forum held in Egypt which believes in importance of boosting joint African action and exchange of experiences in this domain that has taken top priority on the level of the national efforts and the agenda of the African Union. All African states are called upon to join hands to fight corruption; achieve sustainable development and legal aspirations of our African peoples.

Moreover, the depleted resources, our dear continent loses, due to corruption, is considered a main reason behind the decline of the socio-economic assets in many African states.

Within the framework of the Egyptian constitution, Egypt has been committed to the principle of fighting corruption. This has obliged the relevant regulatory bodies and authorities to commit to coordinate to fight corruption, and enhance the values of integrity and transparency, to ensure the preservation of public property, achieve good management of it, and organize benefiting from it for the interest of the people in the first place.

Moreover, required legislations have been enacted and activated to combat corruption in all its forms, as it is considered one of the main obstacles to achieving sustainable development, besides establishment of the National Coordinating Committee to Combat Corruption and the National Anti-Corruption Academy.

Egypt is committed to the international standards in this regard, as It has joined the relevant UN, African and Arab conventions, most recently the African Union Convention on Preventing and Combating Corruption, which is considered the main legal document for the African continent to fight corruption.

The State has adopted legislative reform measures that govern and comply with all provisions of the Convention.

In addition, specialized departments have been created to combat financial and administrative corruption, and take digital transformation measures to enhance administrative and financial governance and help eliminate bureaucracy.

Egypt will pursue its support to the joint efforts that target anti-corruption including doubling the number of training scholarships provided by the National Anti-Corruption Academy.

Egypt also welcomes cooperation with its African brothers and the African Union relevant bodies to exchange the best practices in this field. In this context, we also affirm the importance of deepening international cooperation with the desired benefit in this regard.

In conclusion, I wish you all success to get this forum fruitful in a way that enhances the development efforts in our continent, and make this forum represents an African platform to maximize cooperation in exchange of expertises and data in the fields of judiciary, security, legislation and monitoring.

May Allah’s Peace and Mercy Be Upon You