Sisi arrives in Minsk for talks on bilateral cooperation 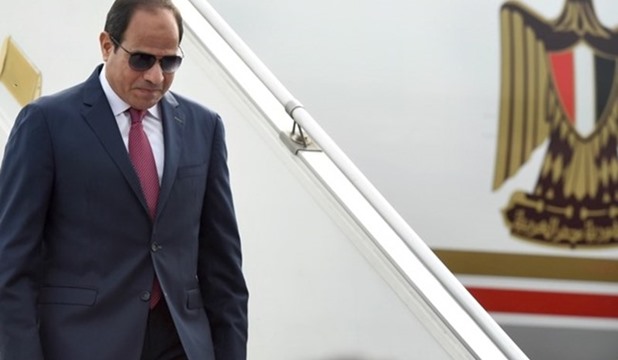 President Abdel Fattah El Sisi arrived in Minsk on Monday 17/6/2019 on a three-day visit as part of a tour that will take him to Romania.

Sisi will have talks with Belarus President Aleksandr Lukashenko on means of boosting bilateral ties.

He will also meet the speakers of the Belarus House of Representatives and the National Assembly.

The two sides will exchange views on a host of political issues at regional and international levels, topped by fighting terrorism and extremist ideology.

The president is scheduled to sign a number of cooperation agreements in the various domains.

Sisi will also have talks with representatives of the business community in Belarus, heads of major companies, as well as senior officials and representatives of governmental bodies on means of boosting economic cooperation and vast investment opportunities in Egypt in light of major national projects in the country.

Egyptian-Belarus relations witnessed progress over the past period in light of Belarus' interest in enhancing relations with Egypt which is considered its main partner in the Middle East and the African continent.

Lukashenko visited Cairo twice, the first in June of 1998 and the second in January of 2017 during which he held talks with Sisi on boosting bilateral relations.

More than 120 visits were organized between Egypt and Belarus to put into effect agreements reached between the two leaders and carry out joint projects.

Five rounds of political consultations were held at the level of deputy foreign ministers.

About the industrial cooperation, a joint project was launched in 2018 between the Helwan Machinery and Equipment Co. and the Belarus auto makers MAZ to produce Maz vehicles.

According to the report, 72 vehicles were jointly produced.

On agricultural cooperation, both sides exchanged more than 10 visits during 2017 and 2018 to study the possibility of enhancing cooperation in agriculture.

The Belarus side provided Egyptian experts with needed expertise as regards the establishment of greenhouses, meat and dairy farms, baby food, bakery products, Belarus rye bread as well as poultry and meat products.

In the field of education, more than 120 Egyptian university degree holders were trained in the Belarus universities from 1991 to 2018.

Belarus has also awarded scholarships to Egyptian students to obtain bachelor's and master's degrees while Belarus teachers and students have been receiving Arabic language courses organized by Cairo University.