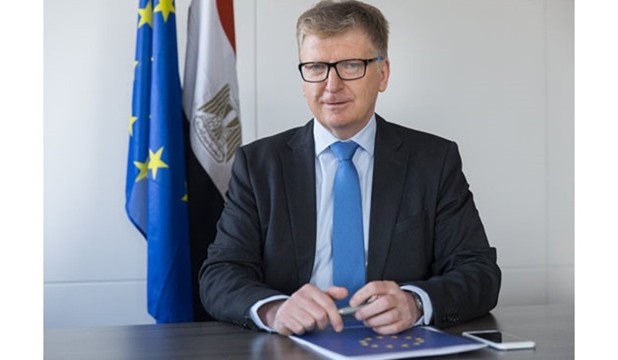 Speaking to MENA, the diplomat underlined the importance of exchanging information to prevent activities related to smuggling and trafficking in cultural objects and artifacts.

He called for putting into effect all international agreements on banning the smuggling of stolen monuments.

The diplomat's statements came on the sidelines of a ceremony organized at the Egyptian Museum in Tahrir on the occasion of signing an agreement with the EU to develop the museum.

Egypt has earlier urged the European countries' ambassadors to back its efforts to return the bust of young Pharaoh Tutankhamun before being sold in the auction house Christie's in London on July 3-4.

He expressed trust that the British authorities would take necessary measures as regards the sale of the invaluable bust in London.

The quartzite statue portrays the boy king as Amun, the ancient Egyptian god of the sun and air.

Meanwhile, he hoped that the project of developing the Egyptian Museum in Tahrir Square in the heart of Cairo, which is funded by 3.1 million euros from the EU, would promote tourism in Egypt and contribute to achieving sustainable social and economic development.