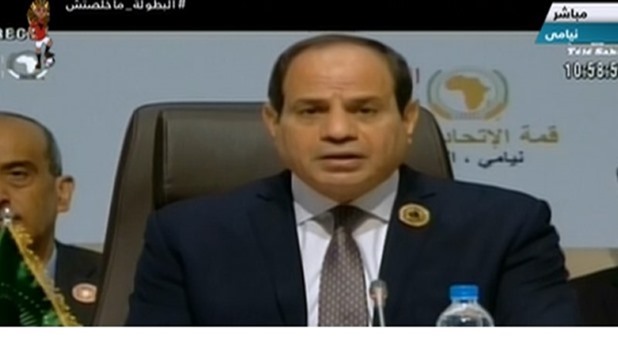 Your Majesties, Highnesses and Excellencies Kings and Heads of African State and Government,

Ladies and Gentlemen Heads of Delegations,

At the outset, I would like to express my appreciation to dear President Mahamadou Issoufou for the hospitality and good organization made by Niger, in addition to the efforts His Excellency exerts within the framework of his presidency of the African Continental Free Trade Area (AfCFTA) in a way that has led to get it in force on May 30. I also extend my thanks to Mr. Moussa Faki and the staff of the Commission for their efforts in this regard.

We deserve to congratulate ourselves for this major achievement that was fulfilled thanks to the African states’ will and belief in the vision of the founding fathers and their ceaseless efforts to gain a bright future to our beloved continent and time-honored peoples. Actually, we have made a long way according to the African Union agenda 2063 and targets of the sustainable development.

Enforcement of AfCFTA is considered a remarkable point in the continental regional integration and a natural extension of the joint African action throughout ages, starting from establishment of the African Unity Organization in 1963, Lagos Plan of Action in 1980, Abuja Treaty for Establishing the African Economic Community and enforcement of AfCFTA on May 30, 2019.

We are on the threshold of activation one of the biggest free trade areas in the world, as it has about 1.2 billion population and a gross domestic product estimated at $3.4 trillion. We have to understand that we still have a long way to bring the agreement in reality and reap its promising fruits, mostly raising the inter-trade rate that reaches now only 15% and achieving the productive and industrial integration, thus requires more efforts to liberalize trade of commodities and services, providing due guarantees, creating proper investment climate and finishing the second phase of negotiations.

Your Majesties, Highnesses and Excellencies,

We have to boost communication with the private sector being an indispensable necessity for any successful attempt of the regional integration. Through it, movement of goods, services, communications, information and individuals will flow to raise the living standard of the African citizen. We look forward to speed up the implementation of the Programme for Infrastructure Development in Africa (PIDA) in its different phases due to its important role in closing gaps, which is needed by the African Economic Integration Project.

Today, the world is interested in Africa, and the success of AfCFTA is the genuine test to attain an economic jump that meets our peoples’ aspirations for a safe decent living and enhance our position in negotiation in the international political and economic forums, consequently it will provide a new situation for the African continent on the global economic map.

Out of this concept, I call upon the member states to ratify AfCFTA because the more countries sign and implement the agreement, the more benefits will be gained from liberalizing trade for African peoples.

In my capacity as President of the African Union, I would like to conclude that I am keen to reach a tangible outcome that gives a genuine push to the beginning of enforcement of AfCFTA and moves us from the institutional construction to the practical action area.

I reiterate my thanks to Mr. President Mahamadou Issoufou, Mr.Moussa Faki and Your Majesties, Highnesses and Excellencies, and declare inauguration of our extraordinary summit.

Peace and Mercy of Allah Be Upon You