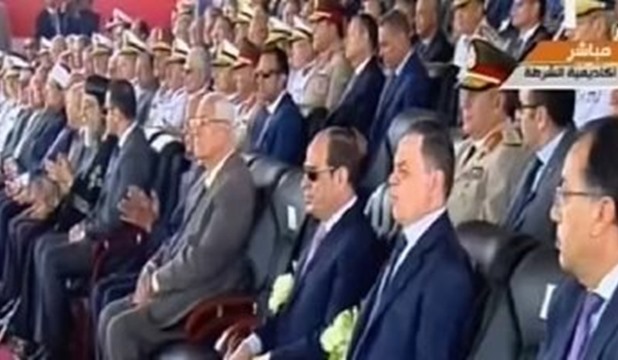 President Abdel Fattah El Sisi attended on Saturday the graduation ceremony of a new batch of police cadets at the premises of the Police Academy in New Cairo district.

The national anthem was played once president Sisi arrived at the academy.

He described the graduation ceremony as a decisive moment that marks an annual feast for the police academy where president Sisi shares cadets their happiness over the graduation.

The academy head, meanwhile, thanked Interior Minister Mahmoud Tawfik for leading Egypt's security path during a crucial stage, besides offering support for the academy to enhance its academic system.

"We have been in race against time to achieve a quantum leap in the field of training in order to qualify policemen to have distinguished capabilities," Police Academy chief Maj. General Ahmed Ibrahim said.

He added that the academy has adopted joint training which brought together the students of both police and military academies, given the state's mounting security needs as well as the ongoing anti-terror efforts.

The academy celebrates the graduation of 1,200 police cadets, including 21 Palestinian graduates, the head of the academy noted .

The Police Academy affiliate training and development center had offered training for some 12,391 officers in all security fields throughout 2019, Police Academy President Ahmed Ibrahim said.

He added that the academy's research center had trained 709 African security cadres from 44 African countries in tandem with the Egyptian Agency of Partnership for Development.

The academy head thanked all state apparatuses for backing his academy's efforts.

During the ceremony, cadets formed up a parade and performed combat military shows featuring their outstanding abilities in dealing with various kinds of crimes.

Students of both the police and military academies took part in a joint training that aimed at unifying the tactical approaches and exchanging the combat know-how, in light of terror challenges facing the country.

Following the military parade, the top notch student handed over the flag of the police academy to another top student, marking the handover of the leadership of the academy.

President Sisi, for his part, bestowed the second-class Order of Excellence on the top cadets.

A number of the martyrs' children delivered speeches at the graduation ceremony, during which they vowed to continue the march of their fathers in defending the homeland.