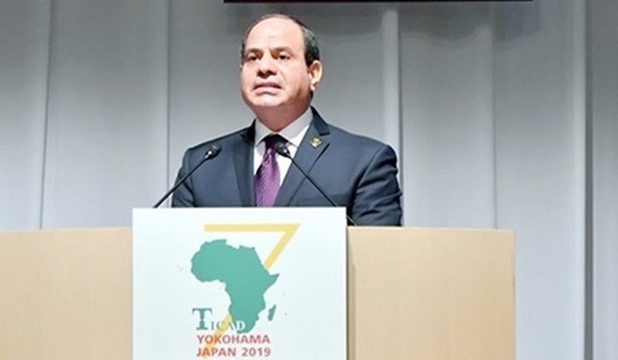 "In the Name of Allah the Almighty"

Your Majesties, Excellencies and Heads of State and Government of Africa,

Ladies and Gentlemen, the Organizing Partners of TICAD,

In the beginning, I would like to express my appreciation to the Prime Minister of Japan, Shinzo Abe, and the people of Japan for their warm hospitality and well-organized efforts in preparation for the Seventh Summit of the Tokyo International Conference on African Development (TICAD), which begins today in Yokohama, Japan; such a beautiful city which has long been one of Japan's gates of openness and interaction with the outer world.

I would also like to thank the organizing partners for the outstanding substantive preparation of this Summit and their continued and unremitting efforts to strengthen the partnership between Africa and Japan.

I am delighted to speak today to this forum, which brings Africa together with one of its oldest strategic partners, which is based on cooperation and common interests to advance the development efforts in the African continent since it was launched in 1993. Today I can confirm that our partnership in the framework of the TICAD fulfilled a great deal of achievements, and interacted positively with the international and regional realities.

I talk to you today, aware of the magnitude of the challenges that still face our countries and affect our partnership, in the light of an international climate ravaged by economic and trade protectionist waves, as well as the pessimistic expectations of slumping global growth, high unemployment rates especially among young people, and the worsening consequences of the phenomenon of climate change, not to mention  the extremist trends and waves of terrorism that are ravaging the world; in a way that exacerbates the challenges facing the state of nation, at a time when the aspirations of peoples are going high, while the scarcity and misallocation of resources are prevailing so these circumstances make incumbent upon us to strengthen our cooperation at various developmental  levels.

We are meeting today under the slogan “Promoting Africa's development by peoples, technology and innovation”, a meaningful title, paving the way for our further cooperation. Transfer of technology and supporting the programs and plans to develop Africa's capabilities and increase its human resources and development with the tools of the day are consistent with our vision of the integration of our continent. These are indeed essential steps to achieve the goals of our development agenda 2063 and implement the sustainable development goals of 2030.

Thereupon, I urge you to intensify our scientific and development cooperation to take advantage of the natural capacities of the African continent in diversification of energy sources, through supporting the renewable and clean energy projects, thus contributing to mitigating the ecological impacts of climate change. Committed to work to protect our planet in accordance with the Paris Climate Agreement, Africa calls on the developed world to abide by their commitments, especially as such countries are those who mostly affected the Earth's climate and the most beneficiaries from their resources.

In the light of the priority given to the role of the private sector in the 7th TICAD Summit, I invite, on behalf of Africa, the international private sector institutions and international multinational companies to invest in our continent. Africa's markets are open, investment conditions are proper, our hands are open to cooperation, our territory is rich in opportunities and wealth, and our determination to build the future of our continent in all fields is unrelenting.

I call on international, continental and regional financial institutions to undertake their role in financing development in Africa and providing financial guarantees to build the continent's capacity, thus contributing to enhancing trade and investment. I remind you that each continent has its own characteristics, and each country has its own identity and circumstances, and that time has come for international financial institutions to set the best conditions for financing the development efforts in Africa.

Consistent with the above, I would like to point to three axes we have to focus on, in order to accelerate Africa's transformation to the economic partner we all aspire for;

First: The development of Africa's infrastructure through implementation of trans-boundary projects, especially those listed as priorities of the African Union, such as linking Cairo and Cape Town by land, the North-South electricity linkage, linking the Mediterranean Sea to Lake Victoria, railway and road projects and renewable energy generation.

The third axis is the priority of providing more jobs and increasing employment, especially for young people; the matter which requires mobilizing national and international investments, attracting capital and localizing technology. The title of the Summit has given a new dimension to the interaction between the African Union countries and Japan, based on the principles of the development of the African human being by encouraging young African cadres to innovate to serve their countries and peoples.

Out of the interrelationship between achieving development and maintaining security and stability, we appreciate the support of the TICAD for our ambitious plan to silence guns across Africa by 2020. However, it is no secret that we still have a long way to go to turn over that painful page of conflict history that has undermined the aspirations of development and created a fertile environment for the spread of extremism and terrorism.

Allow me to repeat what I mentioned when I had assumed presidency of the African Union this year, that partnership with Africa is a genuine opportunity to achieve the joint gains and a profitable economic and security investment.

Africa, which is keen on integration, remains open to the world. We shall struggle to deepen cooperation with the continent’s current partners to adopt executive plans that could be carried out and yield tangible results for the continent’s peoples.

In conclusion, I look forward to this summit to produce tangible and applicable results for giving a push to the Japanese-African states cooperation amidst our peoples’ aspirations for outcome of this summit. The aspired-for goal is turning the resolutions and recommendations of this summit to practical steps that guarantee pursuance of the achievements made by the cooperation ties between Japan and African Union states along the past decades, and our march to fulfill joint interests.

Peace and Mercy of Allah Be Upon You