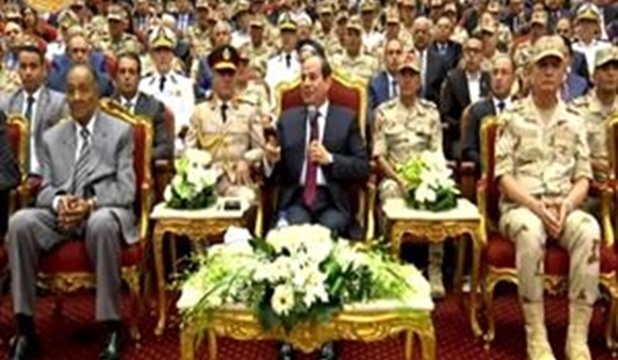 In the Name of Allah; the Merciful and Most Compassionate,

A few days ago, a great anniversary has passed; it is the October War Victory that reflected a strong belief in the just issue, which the Egyptians bore its burden to defend, so Allah Almighty supported and enabled them to engage in a national struggle battle that has become a turning point in the military sciences and a lesson that is learnet by the military students.

Our study of the Great October Victory leads us to necessary conclusions to build the homeland, mainly is the sacrifice and work hard and patiently for this purpose. My confidence in Egypt’s people and its genuine origin that it has not changed and still capable and willing to sacrifice for the sake of the nation.

The second conclusion is its wise determination to achieve its target in spite of all economic hardships that the state realizes how they are tough but it is the compulsory way to fulfil together what we aspire for. This way on which we are proceeding together successfully according to the testimonies of the international institutions which praised Egypt’s promising rate of growth.

Whoever does not possess a national army and sophisticated arms, has not security. So, I have been keen since I assumed the position of commander in chief and during my incumbent post, to strengthen the potentials of our Armed Forces, because Egypt is a pivotal state amidst a turbulent area, as there is no security nor stability in this area without Egypt. Those who target to get it fall down, actually target the whole area. Let us work together to construct a modern state that has pillars of progress and prosperity.

Indeed, the development of human civilization has extended to cover the concept of modern warfare, which also includes asymmetric one, incorporating information warfare and propaganda methods, where fragmentation and deception have become one of its important means. We should all pay attention to this phenomenon which is superficially embodied in the call for the interest of this people, but it harbored beneath ill intentions and evil to Egypt and its people, through the destabilization of mutual trust between the people and the institutions of the State.

In conclusion, we only won the glorious October War when we transcended the limited resources and the gloating and schemes of the haters and enemies to gain the noble aim. You sons of Egypt… always give special interest and provide the suitable climate for the growth and prosperity of your country. Do not heed the claims of skepticism and frustration that are driven by personal goals or narrow interests. Let us all, be as responsible as we should be; i.e. we should be well aware of the interest of the nation to build the state of citizenship and maintain the status of Egypt deserved among nations.