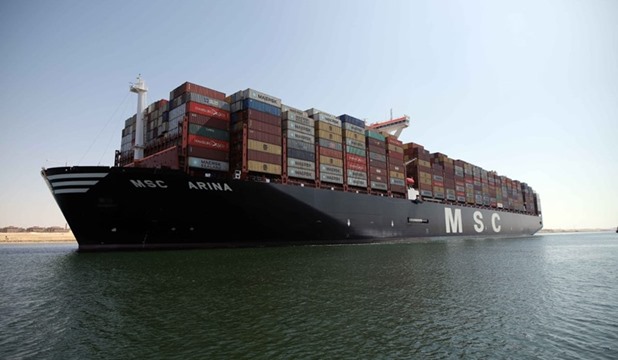 Admiral Osama Rabie, Chairman of the Suez Canal Authority announced Saturday 19/10/2019 the successful transit of MSC ARINA, the world's largest container vessel, on its first trip. The Panamanian ship transited the Canal with the northbound convoy, heading to Spain from Malaysia.

Adm. Rabie delegated the senior pilot Ibrahim Farag who boarded the vessel to welcome the crew and see that the vessel transits safely, as well as being offered all the navigational safety measures; including assigning experienced pilots for its pilotage, as well as the necessary escorting tugs. And as per protocol in the Suez Canal Authority on receiving mega vessels transiting for the first time, Farag presented the ship's master with a bouquet of flowers and the Suez Canal Authority's shield, wishing him and the crew a safe trip, and a smooth transit through the Suez Canal.

In his remarks, Admiral Rabie emphasized that the Suez Canal will remain the lifeblood of world trade as the largest and most advanced waterway thanks to the extent to which transit management keeps abreast of the latest updates in the field of maritime transport, a rapidly growing industry which calls for a professional approach on our side. He also referred to the continuous developmental projects of the waterway as well as the non-stop efforts to better the marine services provided and raising the capabilities of the existing manpower as a response to the constantly evolving industry.

Admiral Rabie also stressed the fact that the New Suez Canal, the most recent developmental project of the waterway that was inaugurated 4 years ago, came at a time where it was an absolute necessity to help with boosting the Canal's efficiency and its ability to accommodate the current and future generations of the world fleet vessels, especially the large container vessels that are growing in importance every day. Those vessels are the center of attention of global shipyards to benefit from economies of scale.