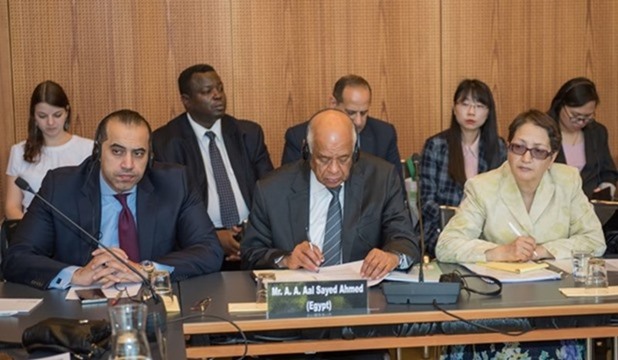 Speaker of Egypt's House of Representatives Ali Abdel Aal warned that terrorism threatens international peace and security, saying there is a legal responsibility for countries that contribute, assist, or encourage the transfer of foreign terrorist fighters from one place to another.

This came during Abdel Aal's participation in the fifth meeting of the Inter-Parliamentary Union (IPU) High-Level Advisory Group on Countering Terrorism and Violent Extremism in Geneva.

During the meeting, Abdel Aal said that proxy wars have become known and visible in many places in the world, stressing that the IPU must have a position on this.

He added there is a legitimate fear that foreign terrorist fighters might be transferred from Syria to other unstable countries with the help of some countries, making it clear that this is what Egypt warns of and will firmly stand against it.

Speaking at the meeting, Abdel Aal said that there are four pillars for any successful strategy to fight terrorism; understanding the causes that lead to terrorism, using well-trained and equipped anti-terror forces to encounter terrorism, enhancing international cooperation in the field of fighting terrorism and sharing information and respecting human rights and supporting victims.

During the meeting, members of the high-level advisory group on countering terrorism and violent extremism reviewed and endorsed a report of the fourth meeting of the IPU's advisory group that was held in Belgrade in October 2019.

The report covered items submitted by the group's members on the regional conferences of the Inter-Parliamentary Union and the United Nations on terrorism that were held in a number of countries, including Egypt that organized the IPU-UN Regional Conference for the Middle East and North Africa in Luxor city on February 26-28, 2019.

Established in 2017, the High-Level Advisory Group on Countering Terrorism and Violent Extremism consists of parliament members who can help push the counter-terrorism joint program through having relevant experience.