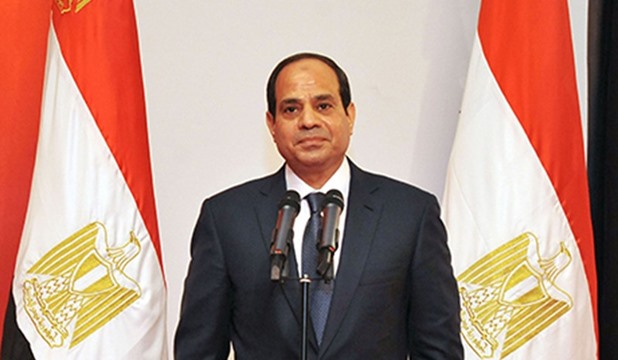 Allow me in the beginning to extend all thanks and appreciation to you for attending this ceremony and participating with the Egyptian people in implementing the steps of their future road map with all its legitimate aspirations and hopes. This is a unique and historic moment that constitutes a critical juncture in the history of this nation. This nation, throughout its long history, has never seen a sound democratic power handover. For the first time in its history, now an elected president shakes hands with an outgoing president and both sign together a power handover document in this country in an unprecedented occasion and uncommon tradition.

The move establishes the beginning of a new era in the fate of our nation which is taking place under the very eye and ear of the whole world on top of whom come our friends and brothers who sincerely extended all assistance to us to overcome the dangers and difficulties and stand up to the challenges that are besetting us.

The presidency of Egypt is a great honor and big responsibility. It is a great honor for me to take over the presidency of Egypt with its time-honored history and great civilization and being the cradle of civilization and the blessed land on which prophets passed by and being also the fountain of literature, arts and sciences. It is a big responsibility to be in charge of a country like Egypt with its big and particular value with all it has of elements of a strong state, demographic influence and distinguished location and being also a link among the world's old continents and a passage for the world trade. Egypt.. with its immense economic potentials and promising investment opportunities together with excellent minds that enriched all fields and domains to which they contributed. Egypt.. the throbbing heart of Arabism and its thinking mind and beacon of the Islamic world and the center of lightning for moderate religious knowledge that renounces violence whatsoever its motivations and terrorism whatsoever its reasons. Egypt.. with its African origin; the leader of liberation movements and independence in the black continent. Egypt.. the Mediterranean country and the pride of civilization and the record of the glories of history.

I plan that the coming phase of building will see a comprehensive progress at the internal and external levels to make up for the past and rectify its mistakes. We will establish Egypt of the future; a strong country where justice and the right prevail; Egypt that enjoys safety and security; Egypt that enjoys prosperity and progress and believes in science and hard work; Egypt which believes that its resources should be harnessed by its sons for the benefit of its sons. Going side by side with building at the internal level will be efforts for reviving its major role at the regional and international levels. The new Egypt will undertake its mission that it has always been keen to take over; which is direct contribution to establishing regional stability and security in our Arab nation. The new Egypt will never ignore its soft power; namely its arts, literature and thought along with its continued interaction and sustained influence in all circles of movement and diversified belongings.

It is high time for our great people to reap the fruits of their two revolutions. Our people have never spared any effort and sacrificed their blood and lives for realizing their legitimate hopes and aspirations. The success of revolutions lies in attaining their goals and their ability to change for the better and in being effectively able to build. It is high time to build a future which is more stable and establish a new reality for the future of this nation. It is a reality where we adopt hard work as a style of our life in an effort to guarantee decent living conditions and provide us with an opportunity to maintain and enhance the rights and freedoms within an aware and responsible framework away from chaos and through a comprehensive national march in which every party listens to the other in an objective and disinterested way. We may differ for the sake of the nation, but we never differ over the nation.

Our difference should constitute enrichment and contribution to the nation and should add more spirit of cooperation and amity to our joint national action.
Your Majesty, Highness and Excellence;
I would like to express deep thanks and appreciation to all Arab brothers and international friends who proved that relations of brotherhood and friendship are not mere words but actions and stances. Allow me to extend special thanks to the Custodian of the Two Holy Shrines King Abdullah Bin Abdel Aziz Al-Saud for his noble initiative on holding a conference for the donor friends of Egypt. I am looking forward to participation by all friends of Egypt in this conference to help build the new Egypt and take part with the Egyptian people in realizing their hopes and aspirations. I am also looking forward to boosting Egypt's relations with your brotherly and friendly countries to complete our march of cooperation and to reap together the fruits of our partnership. Let us work together to disseminate the values of peace and just and to guarantee for our countries and peoples a better future to leave for them a heritage of cooperation, friendship, amity and fraternity to be a fuel that pushes up our relations for a better future and a higher level of cooperation.

As for the honorable counselor Adly Mansour; I tell him that the Egyptian state and people extend all thanks to you for the great services you have done and remarkable wisdom you have revealed during your presidency of the country. For, in less than one year, you have left a marvelous impression in our hearts and entrenched in our minds constructive ideas giving a clear model example for self-effacing and national belonging and altruism giving the national interest the higher priority. I tell you, you have been an efficient president who is patient, wise, humane and generous. You have been a president who loves his country and its sons and who believes that his profuse contribution for the nation will remain flowing in the coming phase of building.

May Allah enlighten my path and guide me along the right road and help me work in His service.
May God's peace and blessing be upon you all.