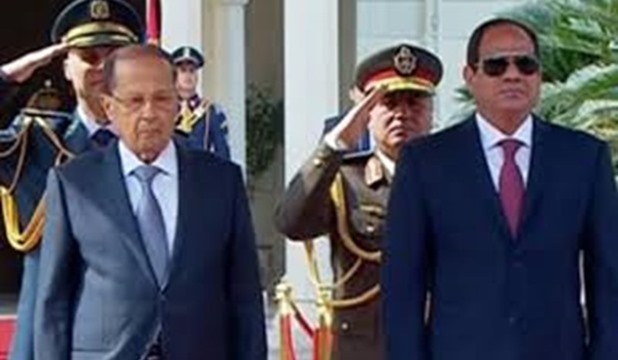 In the framework of the opening-up policy adopted by Egypt toward the various Lebanese parties and standing always on the same distance from all political rivals , president Mubarak has met with President Michel Suleiman in October 2007 when he was commander of the army, and then continued meetings in more than one forum, including the meeting on the sidelines of the Mediterranean Union in Paris in July 2008 and the NAM summit held in Sharm El-Sheikh in July 2009 , as well as a visit by President Michel Suleiman in Cairo in 2008.


Egypt was keen on participating in the session for the election of President Michel Suleiman on May 25, 2008 with a high-level delegation comprising of the President of the People's Assembly, and the Minister of Foreign Affairs.


Mr. Saad el-Hariri, Prime Minister of Lebanon has visited Cairo several times, most recently in May 2010 where he met with the President of the Republic and the Minister of Foreign Affairs.

On the other hand, senior Egyptian officials continue to visit Lebanon on various levels , including multiple visits by former Foreign Minister Ahmed Abul Gheit to Beirut , most recently in April 24, 2010, where he met with a number of Lebanese political leaders to provide support to the government and the Lebanese people following the Israeli threats.


The seventh session of the High Egyptian-Lebanese joint commission , which was held under the chairmanship of former Prime Minister Ahmed Nazif and his Lebanese counterpart Saad Hariri, in June 2010, gave great impetus to bilateral relations between the two countries especially in view of the level of representation and participation of Egypt in the work of the commission , and the number of agreements and memoranda of understanding and executive programs concluded in the fields of health and social affairs, environment, film,  youth, media and tourism.

On the sidelines of the Joint Commission, former Prime Minister Ahmed Nazif met with President Michel Suleiman and Parliament Speaker Nabih Berri, stressing the interest of former President Mubarak to follow up the situation in Lebanon, and his keenness to stabilize the pillars of security and stability.


Egypt reaffirmed its readiness to continue to provide all forms of support and assistance for strengthening development efforts, and to move forward with plans set forward to strengthen Lebanon's electricity and natural gas network to contribute to the prosperity of the brotherly Lebanese people.


Egypt adopted a clear stance in respect of the Lebanese Presidential crisis and Parliament's failure to ensure the quorum required for the session, held on November 25, 2007, to choose a replacement for outgoing President Emil Lahoud. Egypt's position is based on the principles of foreign policy as applied to international and regional issues.

Egypt called upon all parties concerned to refrain from interfering in Lebanon's affairs thereby allowing the Lebanese people to decide their future and encouraging politicians to communicate with one another.


Egypt's main concern is protecting Lebanon's sovereignty and independence and safeguarding the unity of its people.

On 14/2/2005, with the numerous crises facing Lebanon including the assassination of former Prime Minister Rafiq al-Hariri and the ousting of Saad al-Hariri's cabinet in 2010, Egypt called for preserving the national unity of the Lebanese people.

On 19/2/2006, former President Hosni Mubarak paid a visit to Lebanon to accentuate his country's support of the Lebanese people in their struggle against Israel's military attacks on civilian facilities and power stations. The visit was the first by Former Egyptian President since Lebanon's independence and thus had a far-reaching impact on the
two countries' relations.

On 13/6/2008, Egypt underlined the fact that Lebanon is country with 17 sects based on a
very delicate balance and called for the formation of a government as part of the Arab-sponsored Doha agreement.

On 16/8/2016, based on the close relations between Egypt and the brotherly Republic of Lebanon on the official and popular levels, and stressing Egypt's keenness to communicate and consult with all the Lebanese sects, each of which is linked by special historical relations, Egypt moved effectively to resolve the crises that hit Lebanon, especially the presidential vacuum in the country, following the failure of the Lebanese House of Representatives in the election of President of the Republic.

On 21/9/2016, the President met with Lebanese Prime Minister Tammam Salam on the sidelines of the UN General Assembly in New York. The President affirmed Egypt's keenness to follow up developments in Lebanon and preserve its security and stability, stressing the importance of preserving and supporting the unity of the Lebanese people and institutions.
The President expressed the importance of continuing efforts to achieve the national consensus necessary for the election of the President of the Republic, in the interest of the Lebanese people contributing  to the country's progress on the path of progress and stability.

On 31/10/2016, Michel Aoun was elected as a president of Lebanon. The Presidency congratulated the Lebanese people on the election of the Lebanese Parliament, Michel Aoun as President of the Republic of Lebanon. Lebanon election is an important step to consolidate the concept of the national state with its institutions and to achieve political stability. The presidency wished President Aoun success in carrying out his duties.

On this occasion, the Presidency stressed the depth of the historical relations between Egypt and Lebanon and its keenness to strengthen bilateral relations in various fields.

On 13/2/2017, President Abdel-Fattah al-Sisi held a bilateral talks with Lebanese President Michel Aoun during his official visit to Egypt, followed by a meeting between the two delegations. The president renewed his congratulations on his election as president of Lebanon.
President Sisi also expressed his confidence that the leadership and wisdom of President Aoun will provide the stability required for Lebanon at all levels and will contribute to the preservation of state institutions and independence. His mandate will enhance Lebanon's status as a country of political pluralism and cultural diversity. He confirmed that Egypt will continue supporting Lebanon with all possible means to continue building and development process.