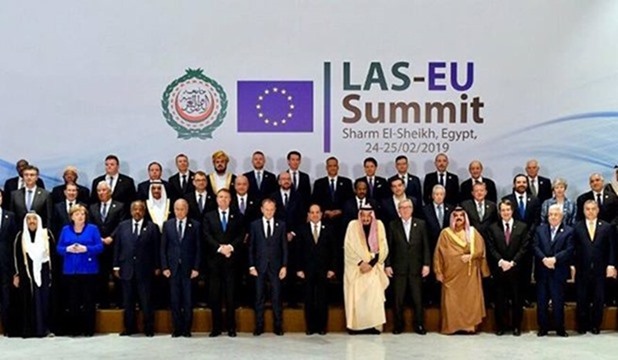 The first Arab League-European Union summit kicks off on Sunday 24/2/2019 in the Red Sea resort city of Sharm El Sheikh.

The two-day summit, held under the slogan of "investing in stability", is expected to see the highest diplomatic attendance rate at the presidential level from the Arab and European sides.

The summit focuses on the issues of strengthening regional security and stability and enhancing cooperation and partnership.

The summiteers will discuss challenges facing both sides, atop of which terrorism, illegal migration and transnational organized crime.

Regional conflicts and the Palestinian cause will be also on the summit's agenda.

President Abdel Fattah El Sisi received European Council President Donald Tusk and asserted the key position the European Union enjoys within the framework of Egypt's foreign policy which is based on mutual respect of every side's privacy. More

On the sidelines of the Arab-European summit, President Abdel Fattah El Sisi received his Cypriot counterpart Nicos Anastasiades and praised the support of Cyprus for Egypt in regional and international forums and organizations, stressing the importance of continuing contacts and consultations between both nations on issues of mutual interest. More

President Abdel Fattah El Sisi met with Deputy Prime Minister of Oman Asa'ad bin Tariq ahead of the Arab-European summit and said that Egypt is looking forward to boosting relations with Oman in all fields. More

On the sidelines of the Arab-European summit, President Abdel Fattah El Sisi met with Palestinian President Mahmoud Abbas and underscored Egypt's steadfast stance regarding the Palestinian issue, the two-state solution and the establishment of the Palestinian state on the borders of 1967 with East Jerusalem as its capital. More