July Revolution and its Development Project 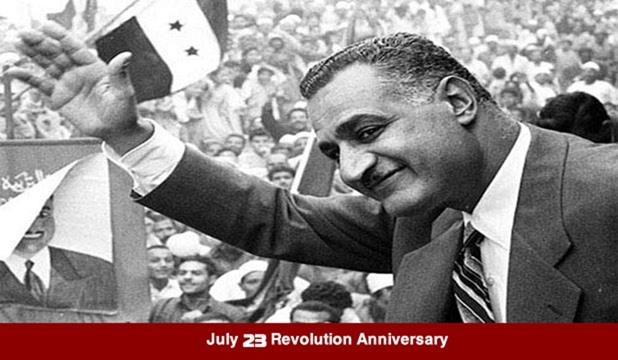 It looks like an accord among the historians and researchers that the economic dimension topped the priorities of July 23 Revolution, as its consecutive decisions concentrated on modernization and development of the national economy. Its first decision was enacting the agrarian reform law, shortly after outbreak of the Revolution; definitely on September 7,1952. This decision was fair to millions of farmers and regain the society’s balance through re-distribution of wealth, income and social authority in the Egyptian countryside. From 1952 to 1970, about 818000 feddans were distributed to 342000 families with 1.7 million members.

The Revolution had established factories in the north and south. The Helwan-based Iron and Steel factory stands as a good witness of the success of the industrial projects launched by the Revolution. They refuted the claim that Egypt is only an agricultural country. Moreover, the Egyptian economy has become more stronger through nationalization of some projects, especially the Suez Canal in addition to building of the High Dam, which had not changed only the lifestyle in Egypt, but it was also a model of the strong will against the most difficult challenges which targeted to obstruct this national project.

Hence, July Revolution had set the base for a national economy, built on two strong pillars; industry and agriculture, however the contemporary Egypt has recently started to set up many giant projects that constitute a locomotive for the sustainable development, mainly the New Suez Canal that has been carried out in a year (August 2014-August 2015) with a full local finance. In addition to the Development of Suez Canal Corridor Project, which aims to making the Canal Zone a global maritime navigation hub and logistics center.

On the other hand, the social justice was a basic principle of July Revolution. Currently, the social dimension is playing the major role in all development projects, whose main ground is providing a decent life for all citizens, like increasing the pensions for about 9 million citizens by 10% starting from July 1st, 2016. Among these initiatives is Takaful and Karma (Solidarity and Dignity) prgramme, which supports the poor families, that have not a supporter, the elderly and handicapped peoples.

Only one year after its implementation, on May 28,2016, about 1.003.136 million families with a total members of approximately 2.3 million were listed in this program in 10 governorates, mostly in Upper Egypt. The program targets to reach 1.5 million poor families that have 7 to 7.5 million persons. It is very successful to the extent that the World Bank selected it among the best four programs worldwide.

Not mention the social housing program  that indicates the state’s keenness to stand with the most needy brackets especially those who are living in the slums areas. The program aims at uprooting these areas within two years.

Culture is an Important Element in the Socio-Economic Process

For being an important element in the socio-economic process, which enriches the the positive personality’s capabilities to participate in pushing forward the society, we have to ask about the nature of July 23 Revolution’s cultural plan.

The Revolution, in its early days has not an integrated concept about a cultural and media plan, because its main job was to liberate the country from the foreign rule.

When the Free Officers took control of the political situation, features of the cultural and media plan appeared, because the political, economic and social transformation needed the people’s interaction to execute the major decisions.

So, presided Gamal Abdel Nasser decided to create up a cultural and national guidance ministry in June 1958. He appointed Dr. Tharwat Okasha minister of culture. Okasha had a vision to undertake this job and actually he had a plan that kept pace with that state’s challenges.

In April 1959, he called for holding a public conference that discussed ways of modernizing the Egyptian culture and arts. The minister affirmed that the cultural flourishing plays the same role like that of industrialization. Hence, the theory had turned into a reality on the ground after the second conference (June 1960), when several cultural institutions like the National Book House, National Documents House, the Cinema Institution, Cultural Palace and the Academy of Arts had been emerged. It is worthmentioning that this Academy has seven institutes for Arab Music, drama, folk arts, cinema, artistic criticism, ballet and conservatoire.

The Revolution launched “The One Thousand Book” project in addition to a lot of law-priced books in many fields, in a way that achieved the social justice in its cultural concept.

We can say that the July 23 Revolution succeeded to set a strong foundation for a lot of cultural and media edifices that targeted the great majority of the people and achieved what, some people called, “Democratization of Culture”.

In this regard, we can’t ignore the role played by the lyrics, song and music in this period, when the patriotic songs largely participated in building the national consciousness and helping in giving the people a push in the arm behind the leader of the Revolution.

The cultural development process has continued and launched “The Reading for All” project in 1991 under the slogan “A Book for Every Child”, then “The Family Library”, project appeared, whose publications covered many fields of knowledge for youngmen and children.

At the present time, the state seeks to set up the Cultural Palaces nationwide, and launched a programme, code-named Ahalina (our relatives) through dispatching cultural convoys to the remote and deprived areas, in addition to another programme that targets the schoolboys during the summer holiday.

On July 20, 2016, an electronic library was launched, which works to establish the biggest library for Egyptian books and documents. Moreover, the Cultural Palaces held a lot of book fairs and other activities.

Thus, after 65 years had passed since outbreak of glorious July Revolution, Egypt is striding firmly towards the future. It is optimistic that the political and security conditions have become more stable and the last commitment of the political roadmap had been achieved by the election of the House of Representatives.

The achievements that have been fulfilled in the past two years confirm that the Egyptian people with their all national forces, supported by a strong patriotic army, is capable to close their ranks against the most difficult challenges.