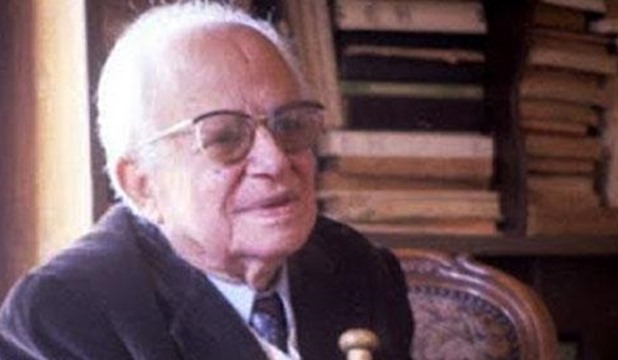 Yehia Haqqi was one of the pioneers of the twentieth century literary movement in Egypt. He was a prominent novelist, short story writer and an encyclopedic intellectual.
Yehia Haqqi was born on January in the popular traditional district of Sayyada Zeinab, Cairo.

• He graduated from the Faculty of Law and worked for a short period as a lawyer in Alexandria.

• In 1929, he joined the diplomatic corps and served in Jeddah, Rome, Paris, and Ankara.

• In 1958, he was appointed director of arts departments and then a literary advisor to the Egyptian General Book Organization in 1958.

• In 1959, he resigned his post, and became editor-in-chief of the well-known cultural magazine "al Magalla".

Haqqi effectively contributed to the broad bases of contemporary Egyptian cultural and artistic revival, including the creation of the arts institute, Puppet Theatre, Cairo Symphony Orchestra, operatic chorus and other folkloric arts troupes.

Haqqi is considered the father of the short story and novel in Egypt. His first short story appeared in 1925,  he established himself as one of the greatest pioneers of contemporary short story writing in the Arab world. He believed that language is not merely a tool of expression or of conveying ideas but rather an integral part of the writing process in all literary norms. His study of law had its impact on his writings.


In the field of novel he wrote a number of impressive works such as:

"Qandeel Umm Hashem"(Umm Hasheem Lantern) in 1943, which had its positive impact on the course of Arabic novel. In it, he reviewed the customs prevailing in the Egyptian society and means of rectifying them through education.


He translated literary works such as:
* The Chess Player - by Stephen Zweig.
* The Axe - by Mikhail Sadoviano.
* Anthony Krugger - by Thomas Mann.
* Blue Brand - by Meter Linel.
* Cairo - by Desmond Stuart.