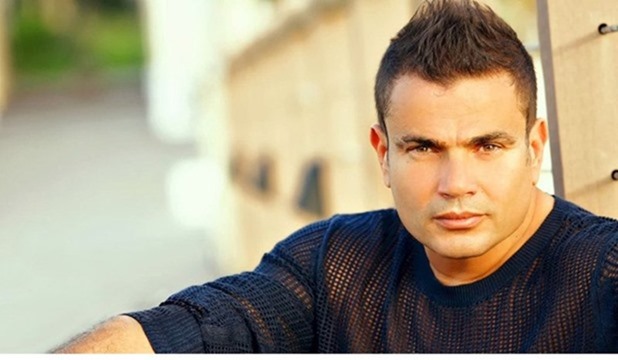 Amr Diab (Amr Abd-Albaset Abd-Alaziz Diab), born on the 11th of October 1961 in Port Said, Egypt, he is an Egyptian Singer, he is known as the Father of Mediterranean Music. He has created his own style of music, which is a blend of western and Egyptian Rhythms. His songs was translated in to 7 different languages and sang by different artists worldwide.

His father was the chairman of Marine Construction & Shipbuilding. He played a great role to igniting the early musical inspiration towards Diab's early stages in his professional music career. Amr at the age of six sang at the July 23rd Festival in Port Said, he was surprisingly rewarded with a guitar from the governor for his excellence.

Amr Diab has earned his bachelor degree in Arabic Music and graduated from the Cairo Academy of Arts in 1986.

Amr was chosen to perform and represent Egypt at the 5th Tournament of African Sports in 1990 where he sang in English, French and predominantly Arabic. Decisively and during the same year the star decided to invade the cinema with a role in the film "El Afareet" with the actress Madiha Kamel. Then came his other hit albums "Habibi" (1991), "Ayyamna" (1992) and "Ya Omrena" (1993). In 1992 and 1994, Amr played two more roles in the cinema in "Ice Cream Fe Glim" and "Dehk Wele'b Wegad Wehob"--which additionally was chosen as the opening film in the Egyptian Film Festival.

Amr Diab's musical career kept growing, aiming for musical excellence. He followed on and released the album "Weylomony" (1994). Amr Diab officially established himself as the super star of the Arab world with the launch of "Rag'een" (1995) and the popular "Nour El Ein" album (1996) which was not only a success in the Middle East but in the whole world and achieved many music awards. He then followed with  "Awedony" (1998).

Amr Diab made a break through with one of his best smashing hits "Amarain" album (1999), Diab engaged with two singers during this album and produced amazing duets, one with the Algerian­-French based Cheb Khaled song "Alby" and the second with the Greek Angela Dimitriou song "Bahebbak Aktar".

The years 2000, 2001 & 2003 witnessed the compilation of all Amr Diab's past experience put together and release of Amr Diab's most magnificent albums ever "Tamally Ma'ak" , "Aktar Wahed" and "Allem Alby", as he engraved his quality of voice singing incorporated with astonishing sense of composer and musical arrangements. Amr always favored innovation of new music, form and style. He merged the Arabian oriental theme of music and the western style of musical beats, arrangements and finalization.

Respectively, Amr Diab has achieved the World Music Awards twice, as best selling middle eastern singer in both his albums "Nour El Ain" in 1998 and "Aktar Wahed" in 2002. Also received a Platinum Award for the sales of "Nour El Ain". Visit the awards section in this site to know more about Amr's awards.

2004's summer witnessed the release of "Leily Nehary" album, Diab gave his fans what they've been longing for, a dazzling hit which blew their minds off and topped their sensations. "Leily Nehary" according to the production company "Rotana" and the fans is to be one of the most successful albums out in the market. "Kammel Kalamak" was released after in December 2005 after a long anticipation from Amr's fans, according to the big sales records, the album was worth the wait! The album contains 10 tracks representing a year and half of continuous studio efforts. Amr won his 3rd World Music Awards on "Ellila de" album which has been released in July (2007).

El-Helm Biography [12 Parts] have been released on the TV Channels by the end 2008. The Biography reviewed Amr's success through his long career in addition to the international recognition and fame that Amr gained through his success.

After much anticipating, 2009 witnessed a new milestone in Amr's career, with the release of "Wayah". 12 track hits the summer to put Amr - as usual - on top of the race. Marina concert was the proven success from his fans with over 80,000 persons. The album won four African Music Awards in London and two Apple music awards in New York

The great artist Amr Diab released hit single " Aslaha Betefrea" in 2010; It included one song with three different arrangements, it achieved massive success and was on the top charts for this year

In addition to this, he performed his annual concert in Golf Porto Marina where More than 120,000 attended.

September 2011, witnessed the release of the hit album "Banadeek Taala", which had massive success with its release, and was considered by all Amr Diab's fans, the best album that was ever released for Amr Diab. The album is produced by Rotana. Amr Diab composed 9 songs in this album, which was assumed to be the reason for the massive success of the album. The album contains 12 track-list.

In February 2011, Amr Diab released his hit single "Masr Allet" (i.e: Egypt spoke). The song was released during the 2011 revolution in Egypt and was dedicated to the martyrs of the revolution

In 2012, Diab made the FIRST Google hangout in the middle east during his performance in Dubai. 10 winners had the chance to speak LIVE with Amr Diab via Google Hangout

Amr Diab launched his "Amr Diab Academy" in 2012 on Youtube. The program was in search for singers from all over the world. Diab intended to launch it on Youtube to make it easier for talents to enrol in the academy from all over the world. Thousands of talents submitted to Amr Diab Academy and at the last stage two winners were announced: Mohanad Zoheir and Wafae Chikki who joined him signing a duet in his Egypt concert in 2012

In 2013, Diab had his Golden Tour celebrating 30 years of success. The tour began in Australia and continued in Qatar, Dubai, Egypt, Greece and Romania

On New Year's eve 2013, Diab performed in Romania, Bucharest. The concert had thousands of romanian fans and other fans flew to attend the concert. The concert took place in Romexpo stadium

Unfortunately Amr Diab could not be in Monaco to receive his awards. Diab is now considered the only Middle Eastern artist to receive 7 World Music Awards throughout the years.

Amr Diab released his album "Shoft el Ayam" in September 2014, the album included 11 songs and is considered number one album in the Middle East on iTunes till this day, followed by "El Leila".

The album got massive success all over the world and was considered one of the best albums Diab released.

In December 2014, For the first time in the world, Diab released his very own "Interaction service" with his fans on Vodafone called "Amr Diab World". The service was a major success and is still an active service until this day. Amr Diab World released the single "Balash tebead" during its launch, and continued with another successful nostalgic campaign, where Diab shared nostalgia memories with his fans by wearing some of his famous outfits of "Tamaly Maak", "Leily Nahary" and "Ana Ayesh".

In January 2015, Diab released a new campaign for "Western Union" with a 45 seconds TVC that aired all over the world

In June 2015, Diab released another campaign for Amer Group, which aired in Ramadan 2015.

In October 2015, Amr Diab left his production company "Rotana" after 10 years, and its expected that Diab will release his new album in 2016 with Nay for Media.

In December 2015, Diab was the first middle eastern artist to receive the golden button from "Youtube" celebrating one million subscribers on his Youtube channel.

Diab is expected to release his new album 2016 produced by Nay for Media.

Amr Diab's domestic life is just as rewarding as his musical career, married to Zeina Ashour, his children are Nour (girl), the twin Abdu-Allah (boy) & Kinzy (girl), and Jana (girl). The father Amr Diab is a great family man, who dedicates his time to his family.

Amr Diab's hard work and passion to creating quality music and new stylized musical techniques was his ultimate aim throughout the years. He has certainly and clearly delivered to all his multi-national fans around the globe and proved that he is one of the best Middle Eastern singers with extraordinary talent, determination, charisma and charming appearance.