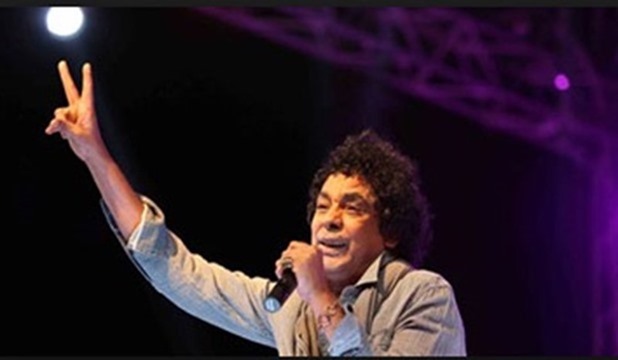 Mohamed Mounir (October 10, 1954) is an Egyptian singer and actor, with a musical career spanning more than three decades. He incorporates various genres into his music, including classical Arabic Music, Nubian music, blues, jazz and reggae. His lyrics are noted both for their philosophical content and for their passionate social and political commentary. He is affectionately known by his fans as "The King" in reference to his album and play "El Malek Howwa El Malek" (The King is The King).
Early life

Born into a Nubian family in Aswan, Mounir spent most of his early childhood in the village of Manshyat Al Nubia, where he shared his father's interests in both music and politics.


As a teenager, he and his family were forced to relocate to Cairo when his village was lost in the floods that followed the construction of the Aswan Dam. It was here that he studied photography at the Faculty of Applied Arts at Helwan University.


During this period, he would often sing for friends and family at social gatherings. His singing voice was noticed by the lyricist Abdel-Rehim Mansour, who would go on to introduce Mounir to the renowned folk singer Ahmed Mounib.

Following his graduation, he was called up for military service in 1974, during which he continued his professional musical career by performing in various concerts. He performed his first such concert in 1975.

Although the public were initially critical of Mounir for performing in casual attire at a time where Arab singers were expected to wear suits, they eventually warmed to his laidback image.

After completing his military service, Mounir released his 1977 debut solo album Alemony Eneeki on the Sonar record label. Mounir went on to release five more consecutive official albums and featured on one soundtrack album under the Sonar label. To date, Mounir has released a total 20 official albums and featured on six soundtrack albums under a number of different record labels.

Mounir's single "Maddad" from this album caused controversy, as its lyrics could be interpreted as a call for intercession from the prophet Muhammad. Among Muslims, there are differing views as to whether the prophet can provide intercession between Allah and his believers. This resulted in the music video being banned from Egyptian television for a time. Mounir responded by saying "it is this fight against rigid thought that makes something out of you".

On his 2003 follow up album "Ahmar Shafayef" (Lipstick), he returned to his more familiar style of mainly secular lyrics. In the summer of 2003, following the release of his album Mounir toured Austria, Germany and Switzerland alongside the Austrian pop musician Hubert von Goisern, and later that year the duo performed a concert in Asyut.

In May 2004, he held a large concert at the pyramids, during which he was physically attacked by a drunken fan. Despite sustaining minor injuries, he continued his performance until the end of the concert.

He continued his trend of releasing secular albums infused with social commentary with the release of his 2005 album Embareh Kan Omry Eshren (Yesterday I Was Twenty), album Ta'm El Beyout (Taste of Homes), released in 2008. Ta'm El Beyout was noted for its creativity but initially did not perform as well as expected in terms of album sales. In 2012, Mounir released his latest album Ya Ahl El Arab we Tarab.

In 2008, Mounir postponed his New Year's Eve concert at Cairo Opera House in solidarity with the Palestinians suffering the effects of the Gaza War. He issued the statement: "delaying the concert is a message sent to the whole world, so that it would move forward and help the people in Gaza."

He headlined the Liverpool Arabic Arts Festival 2010 on July 9, at the Liverpool Philharmonic Hall. He is the predecessor to recent musical groups like Black Theama.

As well as his singing career, Mounir also has an active acting career. Throughout his career he has appeared in 12 movies, 4 television series and 3 plays.

His movie career began in 1982, when he acted in and featured on the soundtrack album Youssef Chahine film 'Hadouta Masreia (An Egyptian Story).

In 1997 he played the role of the bard in the Youssef Chahine French-Egyptian historical drama Al Maseer (Destiny), which screened out of competition at the 1997 Cannes Film Festival.

Mounir played the part of the blind poetry professor "Bashir" in the controversial 2005 film Dunia, which centers around the title character Dunia, a belly dancer and poet played by Egyptian actress Hanan Tork. When the film aired at the 2005 Cairo International Film Festival, it left the audience split between those supporting the film's calls for intellectual freedom and its anti-female circumcision stance, and those disapproved of either the title character's desire to physically express herself through dance, or of the filming of scenes in the Cairo's slums, which could be seen to tarnish Egypt's international image.