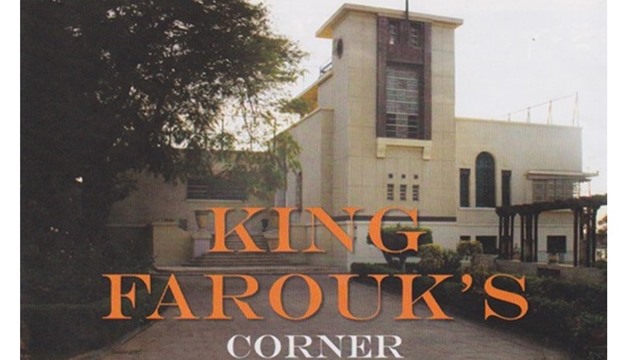 On the banks of the Nile in Helwan near Cairo in an area far from the bustle of this now busy district stands the three-storey King Farouk Corner, its modest boat-shaped architecture and quaint garden providing the impression of a country lodge.

Some 80 years ago Helwan was a peaceful resort enjoyed by members of the royal family, aristocrats and top government officials, and the Corner is a reminder of this time of pure air and lush greenery.

The building was closed in 2011 due to the lack of security that took over the country after the 25 January Revolution.

The land on which the Corner was built was bought in 1916 by Italian architecture Arsan Giovanni in order to build a tea kiosk for then the grand hotel in Helwan. In 1932, it was bought by Mohamed Bek Hafez and then sold to King Farouk in 1935, who added a large garden.

The outbreak of World War II delayed construction work, but in 1942 the building was completed and was surrounded by a botanical garden containing rare plants. The building includes a basement with a large entrance gate at the back where the kitchen and servants quarters are located.

The Corner would now be added to the Hapi Nile Tour, a trip launched by the ministry two years ago connecting four sites located on the Nile in Cairo. The sites are the Egyptian Museum in Tahrir Square, the Mohamed Ali Manial Palace and the Al-Manesterly Palace on Roda Island.

Opened by the King on September 5th, 1942, this relatively small house stands at only three floors high, with the basement containing the kitchen and servants quarters. Having been built on the Nile, the Corner is actually designed to look like a boat, which is visible if you take a ferry to the other side of the river.

The interior of the building is decorated in a very pharaonic style, with everything from small clocks and paperweights to full dining sets embellished with designs and etchings of pharaohs and hieroglyphs. The King even had a scale model replica of Luxor's Karnak Temple placed in his balcony, and three replica mummification beds in his hall.

A life-size bronze statue of an ancient Egyptian harpist greets visitors to the Corner, which also contains a bronze sphinx and a huge gilded clock encrusted with precious stones and featuring golden dials. The glass frame of the clock is decorated with golden ancient Egyptian-style crocodiles.

King Farouk was born on 11 February 1920 to King Fuad I and Queen Nazli Sabri, in Abdeen Palace in Cairo. He was the 10th ruler from the Mohamed Ali Dynasty; his mother was of Egyptian origin, and his father was an Albanian descendant of Mohamed Ali Pasha. The official title he held was His Majesty Farouk I, by the grace of God, King of Egypt and Sudan, Sovereign of Nubia, of Kordofan, and of Darfur.

When his father, King Fuad I, died in April of 1936, the then 16 year old Farouk was two years young to officially claim the throne, since the legal minimum age of a ruler was 18 years old.

Shortly after taking the throne, King Farouk married his first queen consort, Safinaz Zulficar, renamed Farida to keep in line with Fuad's decree that all members of the royal family have the same initials. They were married for 10 years, and had three daughters together, Her Royal Highness (HRH) Princess Ferial, HRH Princess Fawzia and HRH Princess Fadia. Since the King needed a son to inherit the throne, King Farouk divorced Queen Consort Farida, and three years later married Narriman Sadek, who gave him the son he longed for in 1952, Fuad II.