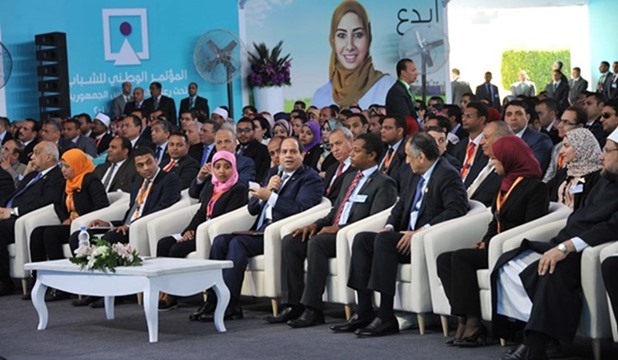 Eight general sessions are held on the sidelines of the conference, which will be attended by a cluster of ministers, heads of parties, MPs, university presidents and governors.

·        President Abdel Fatah El Sisi accompanied a group of young men on a Nile cruise to the headquarters of the two-day National Youth Conference in Aswan. As many as 1,300 young people are taking part in the conference's eight sessions that discuss ways to achieve social, health and educational development in the Upper Egypt.

·        President Abdel Fattah El Sisi has praised the Egyptians, saying they were insisting on facing the challenges. Sisi’s remarks came during his inauguration to the second monthly youth conference in Aswan. Sisi said the Egyptians were persisting in going forward, overcoming all the challenges and hardships for making better future by their hands.

·        The second monthly youth conference was scheduled to discuss a number of issues that are of interest to Upper Egypt residents. A group of youths, who shed light on the issues, said . The conference is seen as a follow-up for discussions and recommendations of the previous national youth conference, held in Sharm el Sheikh, and the first monthly youth conference, held in Cairo last month, where many topics were tackled, topped by economic issues. They stressed that Aswan conference is a glimmer of hope for the Upper Egypt residents and proves that the government pays attention to its southern governorates and their residents.

·        The youth are the future of Egypt, President Abdel Fattah El Sisi said on Friday. "Youths constitute 60% of Egypt's population and they create the future," Sisi told a session with a group of young people from Upper Egypt, on the sidelines of the youth conference. "Egypt is going through a stage of a major change, which will take some time," he said, adding that any country needs tens of years to feel the change.

·        President Abdel Fattah El Sisi on Friday held a meeting with 150 youths from Upper Egyptian governorates on the sidelines of the conference. At the meeting, the president asserted that youths will build the future of Egypt as they constitute 60% of the country's population. He pointed out to the state's keenness on achieving progress to meet the aspirations of the Egyptian people, especially youths. "Egypt will have a better tomorrow."


·        President Abdel Fattah El Sisi attended Saturday activities of the second day of the national youth conference. Prime Minister Sherif Ismail and a number of ministers and MPs, as well as senior State officials were also present on the second day of the event. Speaking to the gathering, Sisi said the real value of services should be paid for the government to be able to continue offering those services. He made it clear that services cost the State some four billion dollars. Citizens should know that one important reason behind poor services is when States do not receive the proper payment for these services, Sisi noted.

·        Egypt has implemented several projects over the past period in drinking water, sanitation and developing slum areas, said Housing Minister Mostafa Madbouli. Speaking at the national youth conference in Aswan on Saturday, the minister said that the Housing Ministry launched a project for the social housing for youths and limited-income brackets. Efforts are underway to build more than half million units as part of these projects, he noted. The challenges of the housing issue for youths and limited-income brackets will be solved within three years, he said. He also said that 7.5 billion pounds were spent on the new cities in Upper Egypt within the past three years.

·        Egypt is keen on improving electricity services in Upper Egypt governorates, said Electricity Minister Mohamed Shaker. The power generation capacities reached about 6,249 megawatts in 2014, he added. Assiut power plant was developed, he said, adding that a mega electricity station was established in Beni Suef. Talking about future plans, the minister said during the second national youth conference in Aswan that an electricity station will be established in south Helwan. Development could not be attained without electricity, he added. There is promising future for new and renewable energy in Upper Egypt governorates, he noted. About 3,000 megawatts of renewable energy are expected to be produced within the upcoming two years, he said.

·        President Abdel Fattah El Sisi on Saturday gave his orders to solve sanitation problems in Aswan's Kima 1 and 2 as soon as possible. Meeting young people taking part in the second monthly youth conference, Sisi added he would inspect the problem himself upon a complaint from a young man in this regard. A young man, taking part in the conference, earlier told Sisi Kima drains flow into the River Nile. For his part, Housing Minister Mostafa Madbouli pledged to totally solve the problem within two months. He added that the problem would be solved by 90 percent by the end of March.

·        President Abdel Fattah El Sisi said proposals tendered by his adviser Ibrahim Mahlab for settling Nuba issues were immediately endorsed. During the second session of the monthly Youth Conference in Aswan on Saturday, Sisi said " we give due attention to all Egyptians, including the Nubians." Sisi said Nuba problems are one of Mahlab's responsibilities, noting that anything that could settle Nuba problems is immediately ratified.

·        The International Cooperation Ministry attaches special importance to developing Upper Egypt governorates, said Minister Sahar Nasr on Saturday. The development will reach all governorates, with all its villages, she added during a session held on the sidelines of the second national youth conference in Aswan. "We aim to attain a comprehensive sustainable development," added the minister. The ministry in cooperation with Egypt's partners in development contribute to supporting the tourism sector, especially in the Upper Egypt governorates, she added.

·        Minister of Investment Dalia Khorshid said the ministry has plans to develop investments in Upper Egypt, based on institutional and legislative axes. Khorshid's remarks were made on the sidelines of her participation in the second session of the monthly Youth Conference held in Aswan under the auspices of President Abdel Fattah El Sisi. The institutional axis is concerned with the presence of centers for investment services in Upper Egypt, she said, noting that there is a center in Assiut and another one to be opened soon in Sohag, the Ministry of Investment said in a statement Saturday.

·        President Abdel Fattah El Sisi stressed Egypt is capable of confronting attempts to instigate sedition among Egyptians. Sisi made the remark on Saturday during a session on an initiative on small and medium sized enterprises in Upper Egypt that was held within the framework of the monthly Youth Conference. The session tackled the challenges facing small and medium sized enterprises as well as means of developing industry, shrinking imports and creating jobs. The talks also reviewed ongoing efforts to amend legislations to improve the investment climate. The president underlined the importance of examining all proposals tendered and putting them into effect if proved to be successful. He added that the government is open for all ideas and is ready for implementing them.

·        President Abdel Fattah El Sisi attended on Saturday the closing session of the monthly national youth conference in Aswan. Also, the Egyptian leader has honored eight young men who proved their excellence in a number of fields. Furthermore, President Sisi announced that the Long live Egypt (Tahya Misr) Fund will contribute to 20 incubators in a project established by a charity association run by one of the honored youth.

·        President Abdel Fattah El Sisi decided on Saturday to help a girl – the first female in Luxor to work as a mechanic – to attain her dream of establishing a large auto repair shop in Luxor. At the end of the second monthly youth conference on Saturday, Sisi honored the girl, noting that the decision is meant to help girls who are striving to improve their standards of living.

·        President Abdel Fattah El Sisi honored on Saturday a number of excellent young men during the closing session of the second monthly national youth conference in Aswan. The list of honorees included Mohamed Hisham, aged 20, who won the title of the golden voice for 2016 nationwide. Mostafa Herzallah, from Luxor, was honored for his contribution in providing incubators for premature babies and helping the poorest villages. Jessica Magdy, aged 15, was also honored by the president for inventing a device for producing electricity from water. Islam Fathi, a graduate from the Faculty of Pharmacy at Sohag University, was honored for his contribution in establishing a number of development projects in the governorate. Ayman Abdel Rahman, from Aswan, has won the first place in Cairo Innovates TV Program of the Academy of Scientific Research & Technology for making a special wheelchair for the disabled people.

·        Prime Minister Sherif Ismail said on Saturday that the government is working on developing the governorates of the Upper Egypt by launching several projects in the region. Addressing the second monthly national youth conference in Aswan, the prime minister added that his government plans to reduce the high rates of poverty and attract more investments to Upper Egypt through developing a package of new legislation, improving infrastructure as well as promoting tourism and accelerating the Golden Triangle and renewable energy projects. Sherif said the government has to cope with multiple problems that have accumulated over many years. Those problems need huge investments and unprecedented rates of performance in all areas to be solved, he added.