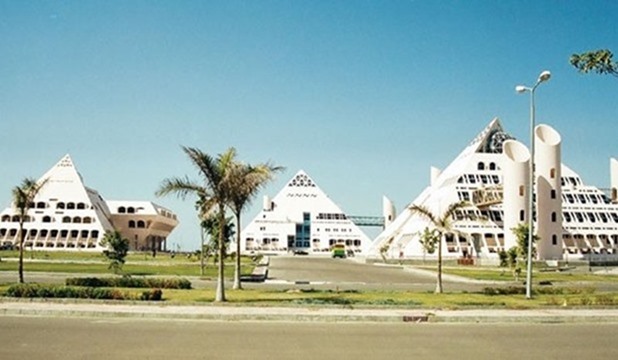 Laying down the foundation of technology parks all over Egypt is considered one of the leading developmental national projects adopted by the Information Technology Industry Development Agency "ITIDA", affiliated to the Ministry of Communications and Information Technology (MCIT). The project represents new investment opportunities that coincided with the achieved growth rates of this sector of about 11.2% during the first quarter of the fiscal year (2016/2017); thus, it ranked first among the various economic sectors of the state. Furthermore, the sector greatly contributed to the exportation of outsourcing services, which amounted to more than U$ half a billion until the end of September 2016 and through a workforce approaching 30 thousand specialists. Moreover, Egypt wins the award as the best country in providing outsourcing services in 2016 and telecommunication and information technology services on behalf of major international companies.

This project launched by the MCIT early 2016, aimed at establishing, preparing and equipping technology parks all over Egypt to receive all activities related to telecommunications and information technology. The project comes in parallel with the presidential initiative to absorb electronics industry, and to be consistent with the plans and objectives of 2030 development plan.

The idea of ​​the project is based on establishing a set of major centers in attractive locations all over Egypt. They are established to serve as technology parks provided with the required infrastructure to be ready to receive all activities in the field of telecommunications and information technology and other related services and productive activities. This target to enhance the capabilities of the employees, university alumni and holders of medium education certificates from all specializations.

In 2016, the MCIT has chosen seven places to establish the technology parks in coordination with the New Urban Communities Authority, which has allocated about 485 feddans to create these parks. The establishment included the following phases:

It has been begun, including:

Afterwards, the MCIT studied raising the number of the technology parks planned to be launched nationwide for up to nine instead of seven. The MCIT has received several requests from the Egyptian governorates to establish such technology parks.

The technology parks in Egypt were first known as of inauguration of the Smart Village in 2003 as being the first great technology park established on Cairo-Alexandria Highway at Abu Rawash. The Smart Village harbours the biggest gathering of international, governmental and financial corporations in Egypt. It is established over an expanded area of 663 feddans, including 15% buildings and 85% green landscapes. Whereas, the work began in Maadi Technological Park in 2010 to offer the latest global technology specialized in international outsourcing field and innovation of information and communications technology industry. The park currently has 11 buildings and 18 companies according to the website of the MCIT.

Third: The Anticipated Targets of the Project

The project targets several developmental and technological objectives, within the framework of encouraging and promoting innovation and development, as well as transferring and adapting technology to all Egyptian governorates, as follows:

- The project attracts foreign and local investments up to LE 13 billion in outsourcing, electronic designing and manufacturing, and other fields.

- It raises the Egyptian export capacities in telecommunications and information technology sector.

- It increases the share of telecommunications and information technology sector in the Gross Domestic Product (GDP).

- It curbs internal migration and provides direct and indirect job opportunities for the Egyptian youth in various fields in Delta, Northern Coast and Upper Egypt.

- It contributes to the development of disadvantaged and marginalized areas, by providing electronic services for citizens.

- It develops and motivates human skills of various governorates workers and university alumni of all specialties to join communications centers.

The MCIT prepares and furnishes technological parks by all services to host the activities related to telecommunications and information technology and associated IT services, such as:

- IT Designing, Outsourcing and Programming services.

- IT Development Zones/Innovation and Entrepreneurs to support small-sized and medium-sized enterprises.

- Public Services which include governmental service centers to the citizens.

The concept of the so-called "Silicon Valley" has been first introduced in San Francisco, California as the first and leading place specialized in providing provesses developments and innovations in the field of the world cutting-edge technology. This region contains a lot of giant technology corporations, such as "Facebook", "Google", "Microsoft" and "Twitter". The concept of establishing these corporations was motivated by a mere idea until their founders caught the targeted funding which rendered these projects a success. Thus, it has become one of the most successful places in the world, contributing to the third of the investment returns in the new projects in U.S.A. It realized huge success, despite the fact that the region does not contain any natural resources except ideas and inventions.

Similarly, the Silicon Waha Company in Egypt is intended to be a regional hub promoting technological innovation. Egypt is considered the salient destination in providing information technology resources and services to Europe, Middle East and Africa. It is among the top 10 countries all over the world to launch the emerging companies. Thousands of programmers and designers, mainly from youth category, in all specialties, have been working continuously on designing and programming many distinct applications designed to facilitate everyday life, especially with the widespread use of programming and the technological mechanisms.

Launching "Silicon Waha" Company... For the Establishment of Technology Parks

The launch of "Silicon Waha" Company, with a capital of LE one billion, has been officially announced to establish and operate technology parks, on the agenda of the second day of the e-Learning Africa 2016 Conference and Exhibition, held on May 24-May 26. The company is established as an Egyptian joint-stock venture (s.a.e.) in virtue of Law No. 159 of the year 1981 and its Regulations on the basis of a partnership between ITIDA, affiliated to the MCIT and the New Urban Communities Authority, affiliated to the Ministry of Housing, Utilities and Urban Development (MOH).

It seeks, through this partnership, to have a key role in planning, designing, implementing and establishing specialized technology parks in the field of telecommunications and information technology, as well as logistic services. Furthermore, it seeks to set up infrastructure and technological projects required for upgrading these parks.

It is planned that the new draft investment law, due to be presented to the Parliament, is going to include incentives articles for the companies to set up projects in these parks. Article 90 of Chapter IV of the law offers incentives to those companies, such as exemptions of all kinds of taxes and customs duties that shall be levied on tools, equipment and machineries needed for the authorised activities of the projects existing within the technology parks, as per the conditions and procedures prescribed by the Regulations.

President Abdel Fattah El-Sisi inaugurated two new technological zones, one in Assiut and the other in Borg al-Arab, via a video-conference during the 20th session of Cairo International Conference on Information and Communication Technology, held in November 2016. This took place after the Egyptian Ministry of Communications and Information Technology had finished the first phase of each zone with investments that exceed L.E 500 million, where nearly 21 buildings have been established, to form the nucleus of future zones with the aim of attracting investments.

The New Technological Zone in Assiut and Borg al-Arab... A Great Achievement by all Standards

Finishing the establishment of the new technological zone in Assiut and Borg al-Arab in less than a year with a 75% occupancy rate is, by all standards, a great achievement. It is worth mentioning that all the plans, designs and feasibility studies of this mega project have been set by Egyptian consulting firms specializing in this field.

The new technological zone in Assiut encompasses several buildings, including: citizen services banks, shops, training innovation and entrepreneurship companies facilities and infrastructure of the first phase, the district administration a mosque and a smart school.

The Technological Park in Borg al-Arab, also, encompasses 42 buildings, 11 of which had been completed, besides an electronics factory due to be completed by the first quarter of 2017. This factory is allocated to the manufacture of mobile phones to produce three million mobile phones per year.

The New Technological Zones... Complexes for Creativity and Innovation

It is scheduled to open two complexes for creativity and technological innovation soon in New Borg Al Arab and Assiut with investments of about LE 50 million in collaboration with civil society and the private sector in order to boost small businesses, provide employment opportunities for young people in Alexandria and Assiut, promote economic development and find creative ideas.

In this context, the Technology Innovation and Entrepreneurship Center (TIEC), affiliated to the Information Technology Industry Development Agency (ITIDA) signed a management contract for the operation of the innovation complex at the technological zone in Burg al-Arab in collaboration with a coalition represented by "Itisal" association aiming to disseminate innovation projects and entrepreneurship in the field of communications and information technology through the formation of creativity complexes in partnership between the public and private sectors.

This coalition includes the Academy of Scientific Research and Technology, Alexandria University, Egypt-Japan University of Science and Technology (E-JUST), the Arab Academy for Science, Technology and Maritime Transport (AASTMT); in addition to other specialized companies.

The New Technological Zone in Assiut...The First Forum for the Employment of the Young People of the Province

The establishment of a technological zone in the New Assiut City is considered a significant cultural shift for the people of Upper Egypt, in general, and Assiut, in particular, as it provides specialized training and technological programs that address the needs of the local and international labor market. It, also, provides thousands of job opportunities for young people in Upper Egypt, whether directly or indirectly.

The Ministry has received many applications from Egyptian and international companies specialized in the field of information technology to invest in these technological zones, whether in Alexandria or Assiut.

The number of applicants has, so far, reached about 1,300 young graduates, of whom 70% are from Assiut. The list of applicants, also, included around 95 names young people with special needs taking into consideration that all of them have got training and qualification under the programmes of the Ministry of Communications and Information Technology that aim to incorporate and empower people with disabilities. In this respect, to facilitate their opportunity to get a job, appropriate means of transport to and from the technological zone have been provided.

Seventh: Agreements on the Design and Manufacture of Electronics in the New Technological Zones

The Ministry of Communications and Information Technology pays a due attention to the Chinese market, so it has concluded a number of agreements and memoranda of understanding with a big number of China’s leading international companies, salient of which are the following three agreements that target making Egypt a regional center, specialized in the design and manufacture of electronics.

Moreover, a trilateral cooperation protocol has been concluded between the National Telecom Regulatory Authority (NTRA), the Information Technology Industry Development Agency (ITIDA) and the National Institute of Telecommunications on holding of a specialized training program in order to develop technical and professional capacities for the establishment, operation and maintenance of fiber-optic networks.

Finally, the establishment of the new technological zones is one of the promising mega projects that creates an ideal working environment and provides many investment opportunities. Not to mention that it is considered a center for the development of human skills in all fields, where it works on motivating and qualifying young people and fresh graduates to enable them to work in the field of designing and manufacturing of electronics as well as in communications and technical support centers. In this respect, the state aims to deepen Egypt's status as a distinguished regional hub in communications and information technology.