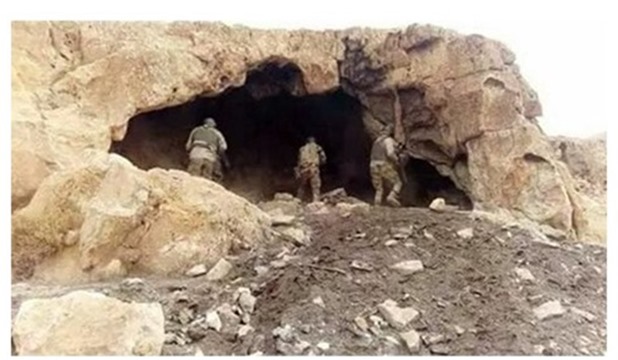 Third Armed Forces announced their full control over central Sinai's Mount Helal, which used to be a main shelter for terrorists for many years.

Commander of the Third Field Army Mohamed Ra'afat el Dash, speaking during a tour organized by the army's morale affairs department to a group of media people and military editors, said the military operation to purge the mountain from all terrorists was carried out over many stages.

The first stage included collecting full information on the mountain and all mountainous paths leading to it in cooperation with different security bodies and Sinai residents, he said.

The second stage included imposing a full siege on all routes leading to the mountain to tighten the grip on terrorists, he added.

The army set up many checkpoints on all routes leading to the mountain to foil attempts to smuggle weapons to terrorists hiding inside and force them to surrender or face army forces stationed outside, he said.

Then, the army command took a decision to raid the mountain by sending nine combat groups, each responsible for a certain sector of the mountain.

The forces, backed by air forces, engaged in combat operations with militants hiding there and after six days the army announced full control over the mountain.

The sweeping operation left 18 takfiris dead and 31 others arrested.

Twenty four caves full of arms and ammunition were found inside as well as a number of booby-trapped motorcycles and explosives materials.

The commander of Mount Helal Liberation Operation, meanwhile, said the participating forces managed to foil all attempts by militants to wriggle out of the mountain during the siege and raid periods.

All participating forces reiterated their commitment to continuing military operations till each spot of Sinai is liberated from terrorists.