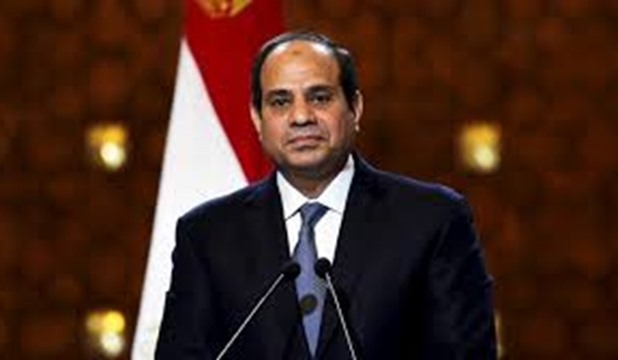 President Abdel Fattah El Sisi attended the Egyptian family's iftar banquet in which all walks of life were present. The banquet aims to show the Egyptians' unity that contributes to implementing development goals. The event was attended by a number of youths, students, writers, intellectuals, journalists, media figures, artists, mothers of martyrs and handicapped people. During the banquet, the president hailed the Egyptian people on the occasion of the holy fasting month of Ramadan. He also reviewed achievements in the past two years including restoring stability in the country. Sisi urged the Egyptians to continue exerting efforts and working to achieve the required goals.He also pointed out that consumption rises by 20 percent in Ramadan compared to other months.  He called on traders and concerned authorities not to increase the prices in this holy month, adding that the government has agreed to increase pensions by 10 percent.

The values of science, work, persistence and effort are crucial to building nations, said President Abdel Fattah El Sisi. Sisi underlined the need of renouncing extremism acts which distort the image of Islam. He also pointed out to the important role played by Al Azhar scholars and imams in shedding light on values of Islam. The challenges besetting the Islamic religion require rallying efforts among all sides and putting aside differences in order to combat terrorism and build nations, he added.

June 29: Addressing an Iftar banquet of the "Egyptian Family

President Abdel Fattah El Sisi underlined that not even an inch of Egypt’s land would be given up. Sisi pointed out that Egyptians were keen to preserve their lands in relation to the case currently before court over a maritime border demarcation agreement between Egypt and Saudi Arabia. The Egyptian state will not comment on judicial rulings which are obligatory to it, the president said. He called on the government to clarify all documents related to the status of the two islands to the public opinion. The 30 June revolution proved that nothing can be forced on the Egyptian people and that if everyone has to comply with their will, the president said.

June 30: Statement on the third anniversary of the June revolution

The Egyptian people regained their identity with the 30 June Revolution and proved to the world that their will cannot be curbed or broken, President Abdel Fattah El Sisi. The president said the revolution embodied the Egyptian people's persistence to achieve their goals and ability to overcome challenges and difficulties. The president said the state has been working strenuously to achieve the hopes of the Egyptian people for a better future and has launched over the past two years several national projects in different spheres. Sisi said that since coming to power, he has been keen to be briefed in person on the challenges facing the development of each of the state's sectors. President Sisi greeted the Egyptian people, the Armed Forces and police for striking a great example of national coherence and facing together black terrorism trying to stand against the will and aspirations of the Egyptian people. He paid tribute to Egypt's martyrs and persons injured for the sake of the nation.

Statement on the occasion marking 3rd anniversary of June 30 Revolution

President Abdel Fattah El Sisi attended the graduation ceremony of the 153rd batch of the Non-Commissioned Officers Academy in El Tal El Kabir city. The ceremony was attended by Prime Minister Sherif Ismail, General Commander of the Armed Forces and Defense and Military Production Minister Sedqi Sobhi, Chief of Staff of the Armed Forces Mahmoud Hegazy, in addition to a number of ministers, top military brass and public figures.

President Abdel Fattah El Sisi attended the opening of ETHYDCO; the biggest petrochemicals complex in Egypt and the Middle East in Alexandria governorate.

Egypt witnessed a difficult period from 2011 until 2014 due to the lack of investments and the non existence of contracts with foreign companies in petroleum and gas exploration, said President Abdel Fattah El Sisi in his speech.

"We are in deep need to remind ourselves to pay attention to every step to take and I am not talking only about the government but about also the Egyptian citizen," Sisi said.

The size of derivatives in the petroleum sector either in gas or diesel is estimated throughout the year by about 80 billion pounds, he added.

He further said that providing electricity for factories and homes in a big country like Egypt is not an easy matter.

As for the Palestinian issue, the president asserted Egypt's inalienable stance on the Middle East peace process and its full support for all peace efforts seeking to settle this much complicated issue. The president underlined the necessity of ending inter-Palestinian division to pave the way for a real effort to set up the independent Palestinian State.

Regarding the Syrian crisis, the president said that the situation there is very intricate as there are several parties involved in this file. He explained that the Egyptian stance is based on respecting the Syrian territorial integrity and the will of the Syrian people along with hammering out a peaceful solution to the crisis and disarming extremist groups together with reconstructing Syria and activating its State institutions.

As for negotiations on the Ethiopian renaissance dam and cooperation between Egypt, Sudan and Ethiopia, the president said talks are forging ahead in a satisfactory way. He confirmed that the Nile water will remain flowing into Egypt and that they are well aware of that.

In the second part of the interview, El Sisi confirmed that he was keen on implementing the economic reform program to spare the coming generations more burdens.

The President touched on challenges facing the economic reform program, noting that major projects contributed to cutting down unemployment rates to 12.5 percent against 13.8 percent and increasing the growth rate to around 4.5 per cent.

In the third and last part of his interview, El Sisi tackled several issues including the internal political situation and means of fighting corruption together with the performance of some executive departments.

The President also took up the absence of societal discipline and renewing religious discourse along with issues of freedoms and human rights. The president further gave his opinion in the performance of Egyptian media and the performance of the government.

As for the issue of freedoms and human rights and concerns that security measures would be adopted at the expense of freedoms and rights, the president asserted his keenness on observing human rights. He meanwhile underlined how safe Egypt is now. He confirmed that he is seeking to maintain human rights in a way that does not affect security of the homeland. The president also confirmed that there are no political detainees in Egypt. Those in detention are held over criminal charges. Nobody is arrested unless he committed a violent act against the State such as terrorism or planning blasts, he added.

Touching on the issue of corruption, the president said that corruption is not mere bribery. It is the overall bad performance and squandering of public funds along with negligence and failure of take over responsibility. It also includes bad planning, bad assessment and bad implementation.

In an interview with Charlie Rose on PBS

President Sisi voiced hope that Egypt would restore its right place and reach development and prosperity for entire Egyptian people. Egypt is a large country with a population of 90 million who wish to live in peace and security, he said, adding that Egypt is committed to the law and deals with all issues within a legal framework.

President Abdel Fattah El Sisi stressed in an interview with the Washington Post that his goal is establishing a powerful State with modern infrastructure and fast-growing economy. During the interview, Sisi talked about reforming Egypt, noting that subsidies and bureaucracy had blocked previous Egyptian leaders, Ignatius said. Sisi said his goal is a "competent and capable country" with a modern infrastructure, faster economic growth and, eventually, broader human rights. He said Egypt is still dizzy from the 2011 revolution that toppled president Hosni Mubarak.

An interview with CNN

President Abdel Fattah el-Sisi has been interviewed by CNN during his recent trip to New York to attend the United Nations General Assembly meetings. In the interview, Sisi thanked the US people and the US TV network for giving him the chance to review the conditions in the region. Sisi said that counter-terrorism is a new element of the US aid program to Egypt, noting that there are military committees that determine Cairo's needs to achieve security and stability.

Worth some 1.2 billion pounds, the "Bashayer El Khair 1" is part of a plan to upgrade shanty towns in the Mediterranean city.

At the inauguration of the "Bashayer El Khair" housing project in Alexandria, President El Sisi expressed regret over the drowning of over 160 persons when an illegal migration boat sank in Rosetta last week.

He urged the Egyptian community to counter illegal migration either to or from Egypt.

The community has to work with state institutions to face this phenomenon, he said.

Sisi announced that a new aquaculture project will be established at the tragedy’s location, saying it could be the largest-ever in Egypt.

President Abdel Fattah El Sisi expressed his confidence that the Egyptian people will overcome the development and economic challenges the country is confronting. President Sisi greeted the Egyptians and their Armed Forces on the October War victory that was achieved thanks to the great sacrifices and strong will of Egyptians. Also, Sisi underlined that the State seeks to meet the Egyptians’ aspirations and races against time to achieve long-awaited achievements. Sisi expressed his confidence in the Egyptians’ ability to attain economic and social development. Sisi went on to say that the October War showed that the relation between the Egyptian people and their Armed Forces was the key to victory. Moreover, Sisi praised the army and police who sacrifice their lives to safeguard the country from the risk of terrorism.

President Abdel Fattah El Sisi attended a celebration marking the 150th anniversary of establishing the Egyptian Parliament. The President delivered a speech during the ceremony, which was held in the Red Sea resort city of Sharm el Sheikh.

Addressing the ceremony on the 150th anniversary of the establishment of the Egyptian parliament, Sisi said that parliamentary life over decades mirrored political, economic, and social development, adding that the Egyptian parliament witnessed major developments since its establishment in the 19th century. Parliamentary life in Egypt, as in any country, reflects the partisan life in a way that clarifies how its political experience had developed, Sisi said. Youths are represented in the parliament by 40 per cent and women by 90 representatives, the president highlighted. President Sisi voiced belief that the parliament would continue to play its effective role involving hard decisions to take with regard to preserving the country’s security, boosting the economy and supporting the issues of education, health, youths, women and low-income brackets.

President Abdel Fattah El Sisi attended the inauguration ceremony of the 20th session of the International Communication and Technology Exhibition (CAIRO ICT). President Sisi inspected the pavilions of the exhibition that will run till November 30.

Statement on the occasion marking the Birthday of Prophet Muhammad (PBUH)

Statement at funeral of church attack victims: Egypt will avenge the martyrs

Statement by H.E. President of the Arab Republic of Egypt Abdel Fattah El Sisi at the celebration marking the Police Day