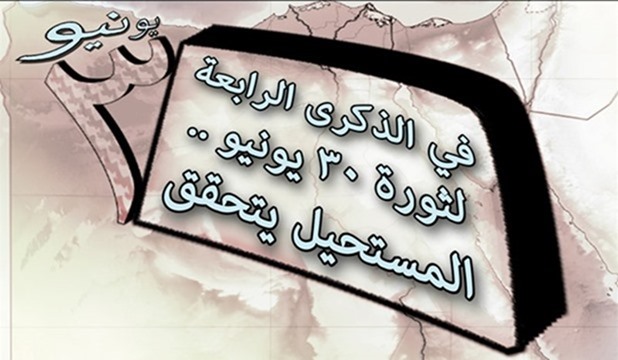 Egypt celebrates the 4th anniversary of June, 30 revolution, which is described as “The rectifying and saving revolution”. It hasn’t only rectified the political path but also the economic one.

The world will always remember that millions of Egyptians from various trends gathered to reject the policies of Muslim Brotherhood group rose up the slogan “Nation is first” and chanted “Long Live Egypt”.

The Egyptians turned over a new leaf by backing the political leadership topped by President Abdel Fattah El Sisi who had undertaken the mission to bring back Egypt’s leading role and taken several crucial and courageous decisions to develop the Egyptian economy.

As always, the Egyptian Armed Forces defended the people and declared its support to the public will against the group that aimed at abusing the nation.

Although the Egyptian people has clearly declared its demands in the protests, but the presidential institution headed -back then- by ex - President Mohamed Morsi had ignored those demands, until the military institution released a statement on the 1st of July 2013 offering a 48-hour time limit to respond to the demands of the people within the framework of its public legitimacy, which implies by a way or another that Morsi will step down.

As the deadline offered by the military institution was to end and the protests rejecting the rule of Muslim Brotherhood continued, the brotherhood group sent on the 2nd of July 2013 its supporters to the streets and Morsi gave a statement confirming his firm adherence to the legitimacy of the elections, rejecting the army alert and threatening those who oppose the legitimacy. As a result violence burst causing some deaths and injuries. So the Armed Forces had a meeting with the political national power and Al Azhar to take the decisions of July, 3 that established a new phase for the Egyptian revolution.

Statement by the Armed Forces on Monday, 1 July 2013

On the 3rd of July 2017 the Armed Forces Commander in Chief Abdel Fattah El Sisi announced the historical statement that included the roadmap which determines the plan after toppling Morsi.

Statement by the Armed Forces on Thursday, 3 July 2013

Achievements of the Revolution over 4 years

After the outbreak of the June 30 Revolution in 2013, there was a need for outlining a new constitution and having a presidential and parliamentary elections to complete building up a modern and democratic state of Egypt.

2- Egypt regains its leadership
The Egyptian diplomacy succeeded over the last four years in regaining Egypt’s regional and international leading role. President Abdel Fattah El Sisi has been always keen to make bilateral visits and participate in the international and regional events to connect Egypt with the world.

The Syrian issue: The Egyptian diplomacy made intensive efforts to stop bloodshed in Syria and present a national platform for the Syrian opposition - led by the Syrians themselves - through Egypt's sponsorship of a group that attracts moderate national opposition seeking a political solution that establishes a Syrian civil state that maintains its territorial integrity and its inter-communal and religious spectrum.

Libyan issue: Egypt, through its initiative, expressed its firm and clear position on the developments of the situation in Libya, which were based on the following three principles: Respect for the unity and sovereignty of Libya and its territorial integrity, non-interference in the internal affairs of Libya and Inclusive dialogue and non-violence.

Yemeni issue: Egypt always stresses its support for Yemeni legitimacy, and follows the developments of the Yemeni issue since the revolution of February 2011.

Egypt succeeded in overcoming many difficulties and challenges on the security level after June 30 Revolution. Egypt is still facing a fierce enemy either those who set several plots against Egypt and its people or those who support them with money and weapons in order to achieve their goals.

Egypt also expressed its support for all countries of the world that have been subjected to terrorist operations. Egypt has also stressed in many international forums the need to adopt a comprehensive approach to combat terrorism.

During his speech on the Occasion Marking the Anniversary of Prophet Muhammad Birthday in January 2015, President Abdel Fattah el Sisi called on Al-Azhar, the Ministry of Awqaf and Dar al-Ifta to renew a genuine religious discourse to cope up with our age.

June 30 Revolution was not just a political revolution but a revolution on the economic conditions. After June 30, Egypt witnessed unprecedented economic efforts and reforms that were implemented to address the structural imbalances that the Egyptian economy has suffered for years.

The Egyptian government started a program for the economic reform including: liberating foreign exchange system to eliminate foreign currency shortages, encouraging investment and exports, containing inflation and public debt, in parallel with implementing clear measures to achieve social protection for the needy and Low-income people.

President Abdel Fattah el Sisi has been keen on more than one occasion over the past four years to highlight the role of youth and the need to use them in order to qualify them to take the leadership in the future. 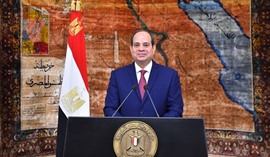