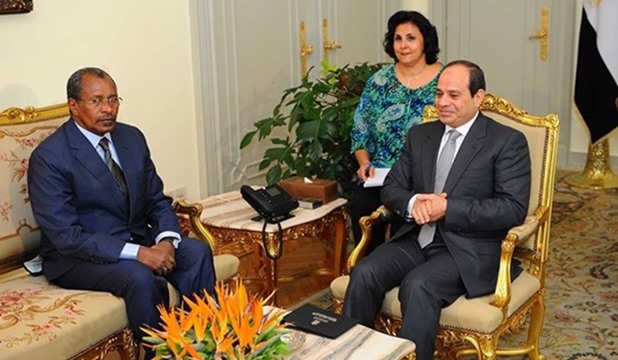 President Abdel Fattah El Sisi received Djadallah. The visiting minister conveyed the greetings of Chadian President Idriss Déby to President Sisi and handed him over a message on means of promoting bilateral relations.

The Chadian minister asserted his country's appreciation for the role of Egypt at the Arab and African levels. The minister further underlined his country's keenness on enhancing joint military cooperation and coordinating with Egypt in the domain of fighting terrorism.

President Sisi also underlined that relations between the two countries are strong, said the spokesman, adding that the president asserted the necessity of upgrading bilateral relations and enhancing joint cooperation especially in the security field.

Attending the meeting were Minister of Defense Sedqi Sobhi and the Chadian army chief of staff along with the Chadian ambassador.

During his meeting with Djadallah, Chairman of the Arab Organization for Industrialization (AOI) Abdelaziz Seifeldin asserted that the AOI is keen to cooperate with all African countries and is ready to market its products in Chad.

This visit reflects the depth of ties binding Cairo and all African countries that are rich in their natural and human resources, Seifeldin said, noting that Egypt is keen to boost its relationship with African states in order to maintain security and stability in the continent.

The Chadian minister hailed as positive the role played by the AOI and its active participation in implementing several development projects in African countries.

Djadallah also lauded Egypt’s role at the Arab and African levels, noting that N'Djamena is keen to foster cooperation and coordination with Cairo, exchange expertise with it and to cement cooperation with the AOI in order to provide the Chadian market with the organization's high-quality products.

Djadallah and his accompanying delegation left Egypt, wrapping up a three-day visit to Egypt.