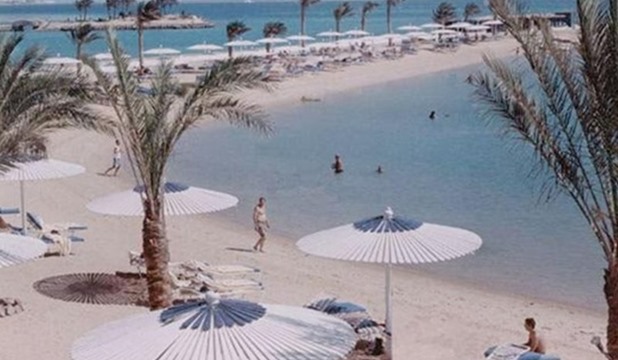 It lies 395km south of Suez, and is noted for its magnificent summer and winter climate. The clarity of its water made it a centre of tourist attraction especially for divers and practicing water sports because of the worldwide fame of its coral reefs and rare marine life it enjoys.

Hurghada has a large number of hotels and tourist resorts of different categories, as well as well -equipped diving centers offering facilities for aquatic sports, in addition to restaurants and bazaars.

There is also the Aquarium which houses the most wonderful marine species especially the mermaid. National and international fishing contests are held in Hurghada. It is connected with Luxor by paved road across Safaga / Qena / Luxor.Daily sightseeing tours to Luxor can be arranged. A cruise service connects Hurghada with Sharm Al-Sheikh,the cruise takes 90 minutes by ferry.

The Red Sea region abounds in monuments of the various historical eras.

The Red Sea was created by the movement of plates on the Earth's surface about 30 million years ago.

At that time, the Arabian Peninsula started to part from Africa along a thin break line which was filled by the ocean's water. However, "Mother Nature" did not stop there.

Twenty million years ago another geological movement started. The Arabian Peninsula which parted from Africa started to move to the North.That movement struck resistance in Turkey and

swung to the East, and another break line was formed.

This one stretching all the way from the Northern part of Israel, through the Jordan Valley to the Dead Sea, and finally through the Gulf of Aqaba to Ras Mohamad at the Southern point of

the Sinai. The young age of the Gulf of Aqaba is what makes it so deep, 100 meters in Dahab and 1800 meters North of the Straits of Tiran.

On the other hand, the old Gulf of Suez is relatively shallow, with 85 meters maximum depth. The Red Sea is still widening at about one half inch per year, the rift is the youngest region of continental

breakup on the planet, allowing geologists to learn about processes that occurred in the Atlantic and Pacific oceans hundreds of millions of years earlier.