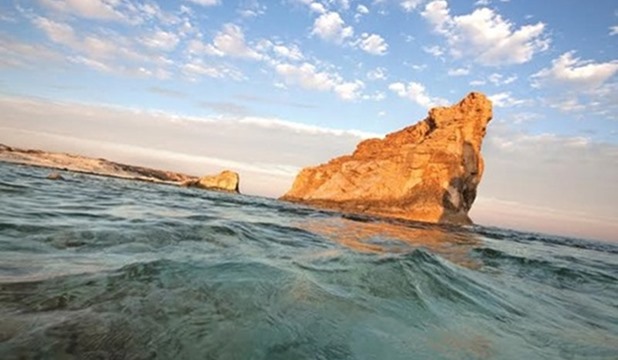 Mersa Matrouh lies 290 km. West of Alexandria and 222 km from Salloum. The distance from Cairo to Matrouh is 524 km.It lies on a bay on the Mediterranean and is distinguished by its 7 km. long beach,which-as all visitors have testified-is one of the most beautiful in the world.

The beach is famous for its white soft sands and calm transparent waters, for the bay is protected from the high seas by a series of rocks forming a natural wave-breaker, with a small opening to allow light vessels in.

This beach dates back to the days of Alexander, the Macedonian, when it was known as "Paraetonium" and also as "Amunia". It is said that Alexander the Great stopped there during his historical expedition to pay tribute, and sacrifice, to the god Amun at Siwa, so that he becomes Amun's son and his rule be a historical continuation of the pharaohs. There are relics of a temple from the time of Rameses II (1200 B.C.) in Matrouh.

Recreational tourism  represented in its different beaches such as :

About 28 km. west of Mersa Matrouh, it is distinguished by its numerous natural caves and enchanting scenery.

It is a land extending out into sea, about 85 km. east of Matrouh, and is distinguished by the beauty and serenity of its beach.

An ancient city discovered in 1985, it comprises temples, tombs, baths and nobles' houses, from the Graeco-Roman period. It is the largest archaeological city after Alexandria.

104 km.west of Alexandria, this beach is renowned for its natural scenery, soft and white sands and tranquility. It was once described by Churchill as having the best climate in the world. Here also, the Germans, led by Rommel, and the Allies, led by Montgomery, fought one of the most decisive battles of World War II: The Battle of Alameen.