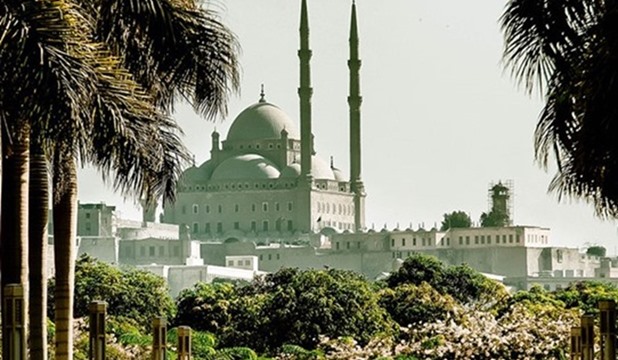 Al-Azhar Park is a public park located in Cairo, Egypt. Among several honors, this park is listed as one of the world's sixty great public spaces by the Project for Public Spaces.

The Al-Azhar Park is important for tourists to Egypt because this hilly site is surrounded by the most significant historic districts of Islamic Cairo. This is one of the primary destinations for many visitors to the city, and this park located in its heart provides many advantages, including a wonderful view of the surrounding area.

The creation of the 30 hectare (74 acre) Al-Azhar Park on Al-Darassa, by the Aga Khan Trust for Culture, came when his highness the Aga Khan decided to donate a park to the citizens of Cairo in 1984, out of the Islamic belief that we are all trustees of God’s creation and therefore must seek to leave the world a better place than it was before us.

The park functions as a green lung because of its enormous potential, being located at the center of a historic location. The park is the largest green space created in Cairo in over a century.

Located on the western side of the park are the old Fatimid city and its extension El Darb Al Ahmar, with their wealth of mosques, madrasas and mausolea, signaled by a long line of minarets. To the south are the Sultan Hassan Mosque and its surroundings, as well as the Ayyubid Citadel. On the eastern side is the City of the Dead with its many social welfare complexes sponsored by the Mamluk Sultans and dignitaries, which became an area that developed into a dense neighborhood of its own. This area was indeed in great need of an open green space. The hilly topography of the site, formed by debris accumulated over centuries, now provides elevated viewpoints dominating the city and offers a spectacular 360 panorama over the townscape of historic Cairo.