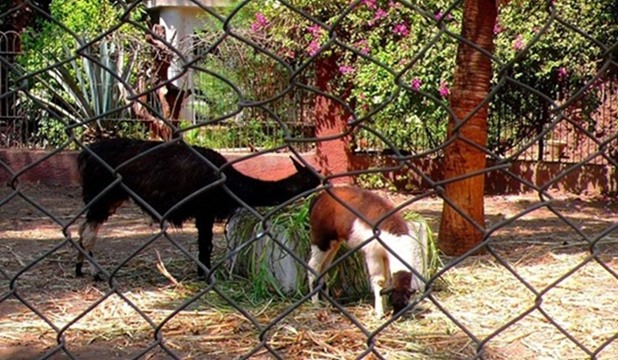 The Giza Zoo is a zoological garden in Giza. It is one of the few green areas in the city, and includes Giza's largest park. The zoo covers about 80 acres (32 ha), and is home to many endangered species, as well as a selection of endemic fauna.

Rare species have been successfully bred in the zoo - including the first California sea lion to be born in the Middle East in 2002.

The zoo was built by Khedive Ismail and opened on 1 March, 1891. It was built on about 80 acres that was once part of the harem gardens. Ismail imported many plants from India, Africa, and South America, of which a banyan tree planted about 1871 can still be seen. The original 180 birds and 78 other animals in the zoo's collection were taken from Ismail's private menagerie.

The gardens include roads paved with black stone flags from Trieste, footpaths decorated with plebbles laid out like mosaics, and a pond with a marble island that is now the zoo's Tea Island.

The zoo also includes a suspension bridge designed by Gustave Eiffel that lets visitors view the animals from above. This bridge may have been the first elevated viewing area at any zoo in the world.

There is a reptile house and taxidermist's building on site.

The Alexandria Zoo is a zoo close to the Smouha neighborhood in Alexandria, Egypt, which allows guests to walk around the zoo and view a selection of animals from around the world.

The zoo also includes a reptile house and a 'birds and small mammals' section, as well as a museum. The reptile house is home to several endemic Egyptian species, including the Egyptian cobra, the Nile crocodile and the critically endangered Egyptian tortoise.

Fayoum Zoo is one of the zoos in Egypt, established in 1984.

Tanta Zoo is also called Al Andalus Park. It is one of the zoos in Egypt. It was established in 1956. It has an area of ​​about 14 acres.

Zaqaziq Zoo is one of the zoos in Egypt, established in 2000 on an area of ​​five acres.