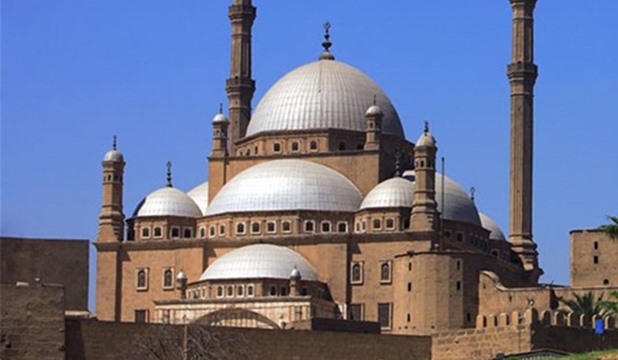 Cairo is the capital and largest city of Egypt. Located near the Nile Delta, Cairo was founded in 969 CE by Jawhar of the Fatimid dynasty. Cairo is full of many Islamic monuments.

Amr was the Arab general who conquest Egypt to fight against the Romans and he was hailed by the Copts as a liberator. Then he was appointed governor by the Caliph. Amr founded a new capital instead of Alexandria, and that was Al Fustat.

In the center of Al Futat was the mosque which was named “The Mosque of Amr” It was surrounded by the plans and houses of Al Fustat. Originally the mosque was overlooked the Nile from the Northwest side.

The mosque was called “the Crown of the Mosques” and the Antique Mosque. In fact the actual features of the mosque are very different of its ancient aspects. Many reconstructions and restorations took place since the time of its foundation.

The mosque was built in a shape of rectangular low shed of wood and palm leaves supported on columns of palm stems, stones and mud bricks while the floor was covered with gravel. That first simple mosque measures about 29 m. in length and 17 m. in width.

Since the time of the foundation of the mosque many additions and extensions took place, but the most important one was made by the governor Abudllah Ibn Taher during the reign of Caliph Al Mamoun in the 9th century. He extended the mosque adding a new area at the S.W side and that extension was the last one.

Thus at that time the mosque measures 120 m. in length and 112 m. in width and that represents the actual area of the mosque. At the end of the Fatimid period, the mosque was ruined as a result of Al Fustat Fire which took place in 1175 AD.

This is the third "large mosque" (gamee) built in Egypt. It is characterized by its spacious hall (saha), its unique spiral minaret and a large collection of gypsum decoration.

Built by Ahmed Ibn Tulun in 879 (265 H), the Ibn Tulun Mosque in the Sayyedah Zeinab district has an atmosphere of tranquillity unlike that of any other mosque in the city.

Its design is simple, consisting of an open sahn with an ablution fountain in the center, surrounded by four riwaqs, the largest being the Qiblah riwaq.

There are five naves on the Qiblah side (the side facing Mecca), and two on the remaining sides. The building style follows that of the Abbasid type, characterized by pilasters on which slightly pointed arches are applied, and which have a slight inward curve at the bottom.

Al-Azhar Mosque (the most blooming), established in 972 (361 H) in a porticoed style shortly after the founding of Cairo itself, was originally designed by the Fatimid general Jawhar El-Sequili (Gawhara Qunqubay, Gawhar al-Sakkaly) and built on the orders of Caliph Muezz Li-Din Allah. Located in the center of an area teaming with the most beautiful Islamic monuments from the 10th century, it was called "Al-Azhar" after Fatama al-Zahraa, daughter of the Prophet Mohamed (Peace and Prayers Be Upon Him).

It imitated both the Amr Ibn El-As and Ibn Tulun mosques. It is the first Fatimid monument in Egypt.

Today the university built around the Mosque is the most prestigious of Muslim schools, and its students are highly esteemed for their traditional training.

Architecturally, the mosque is a palimpsest of all styles and influences that have passed through Egypt, with a large part of it having been renovated by Abdarrahman Khesheda. There are five very fine minarets with small balconies and intricately carved columns. It has six entrances, with the main entrance being the 18th Century Bab el-Muzayini (barber's gate), where students were once shaved. This gate leads into a small courtyard and then into the Aqbaughawiya Medersa to the left, which was built in 1340 and serves as a library. On the right is the Taybarsiya Medersa built in 1310 which has a very fine mihrab.

The mosque of Muhammad ’Ali Pasha was built between 1828 and 1848. Perched on the summit of the citadel, this Ottoman mosque, the largest to be built in the first half of the 19th c., is, with its animated silhouette and twin minarets, the most visible mosque in Cairo.

It is built on the site of Mameluke palaces destroyed at the behest of the patron, an act reminiscent of that of Saladin who wiped out all traces of Fatimid power by dismantling their palaces, and it also superseded the adjacent Mosque of al-Nasir Muhammad as the new state mosque.

This mosque, with its general scheme consisting of a square sanctuary covered by a central dome flanked by four half-domes, is a conscious revival of Ottoman imperial style. The style, however, was not the only imperial aspect that the architect strived to emulate.

The monumental scale of the sanctuary rivals that of Sultan Ahmet (1609-17); the adjoining courtyard surrounded by the typical domed porticoes is of a larger area than that of the Süleymaniye (1550-57); the slightly pointed dome, although of a diameter smaller than its Ottoman counterparts, has a profile equal in height to that of the Süleymaniye and higher than that of the Selimiye (1569-74); the height of the minarets is unrivaled by any of their Ottoman counterparts. The mosque’s decoration style shows strong European influence, characteristic of Ottoman architecture in Istanbul from this period.

The Mosque of Sultan al-Nasir Muhammad was the royal mosque of both the Citadel and Cairo itself.  There were several mosques within the Citadel, but that of Sultan al-Nasir was one of the most glamorous in Cairo until the original dome covered with green tile over the nine-bay maqsura in front of the mihrab, collapsed in the 16th C and the marble was carried off by the Ottoman conquers.

This hypostyle mosque is built as a regular free-standing rectangle around a courtyard with a large dome covering the prayer niche area. There are three entrances, including one on the northeastern side with a shallow recess and another on the northwestern wall with a stalactite portal. The third entrance is on the southern wall and is adorned with a pointed arch including a sun-rise motif in ablaq masonry. None of the entrances has a maksala or bench, making them the exception to the rule in Cairo.

The position of the two minarets and two asymmetrically located portals are dictated by the orientation and location of the mosque, which faces the northern enclosure of the Citadel on one side with its official and military buildings, and adjoins the residences of the sultan on the west and south.

Originally, the mosque had a number of large iron-grilled windows that are now walled up. It was also paneled with high marble dados which were later removed by Sultan Selim (the Grim) and shipped to Istanbul with other marbles from the palace. However, the qibla wall has been completely restored.

Al-Nasir Muhammad’s mosque has another interesting feature, consisting of a small loggia located above the northwestern entrance, reached by the staircase that leads to the roof. It is perhaps a dikkat al-muballigh, like the bench on columns in the sanctuary of other mosques that is used for call to prayer, recitations and Quran readings.

In 1171, the Damascus-appointed governor, Salah el-Din (Saladin) overthrew the last Fatimids caliph and seized power himself, establishing the Abbasid Dynasty.

Salah El-Din (Saladin) built the Citadel in 1183 A. D. as the centre of government, while simultaneously extending and restoring the city fortifications, with the aim to dominate Cairo from Mokattam Hills. This huge project was incomplete at his death, and much work continued in later times.

Cairo is the best preserved of all Islamic cities, and substantial parts of Salah el-Din’s structures remain today. In spite of the impounding of the defensive towers, the Cairo Citadel is, from a military point of view, slightly less substantial than the Citadel of Aleppo (In Syria), but it remains one of the most notable existing examples of Muslim military architecture. The skilful masonry work and the impressive vaulting in particular have no precedent in Egypt.

After the death of Salah al-Din, his nephew, Al-Kamel, reinforced the Citadel by enlarging several of the towers. Specifically, he encased the Blacksmith’s Tower & the Sand Tower making them fully three times larger. These two towers controlled the narrow pass between the Citadel and the Mokattam Hills. Al-Kamel also built a number of great keeps (towers) around the perimeter of the walls.

These massive structures were square, up to 25 meters (80 ft) tall and 30 meters (100 ft) wide. In 1218, upon the death of al-Kamel’s father, Sultan al-Kamel moved his residence to the Citadel where he built his palace in what is now the Southern Enclosure. While the palace no longer exits, until the construction of the Abdien Palace in the mid-19th century, it was the seat of government for the Country of Egypt. The Citadel consists of three main sections, surrounded by their own walls with towers and gates. These consist of the Lower Enclosure, the Northern Enclosure and the Southern Enclosure which is the Citadel proper (El-Qal’a3). The two main gates are on the north (Bab el-Gadid) and south (Bab el-Gabal). Particularly when viewed from the back side (from the north), the Citadel reveals a very medieval character.

The Nilometer on Rawda

The Nilometer in Modern Cairo on the southern tip of Rawda (Roda) Island facing al-Fustat to the east is a rather unique historical site often overlooked by visitors to CairoThis Nilometers, in Arabic known as a miqyas (Mikyas al-Nil), was used to measure the flood levels of the Nile River and is a heritage of Egypt's distant past, when such structures doted the course of Egypt's grand river.

It consists of a pit that extends well below the level of the Nile that in turns connects with the Nile through tunnels dug on three levels on its eastern side. The pit, which is lined with stone, is circular at the bottom and rectangular at the top, is accessed by a staircase on the interior walls. Its walls have four recesses with pointed arches, and small, relatively thin columns to either side adorned with two types of zigzag framing decorations carved on its stone. Though these arches, known as "tiers-point" are the same type as those used in Gothic architecture, they preceded the Gothic arch by some four hundred years.

In the center of the pit, there is a marble, octagonal column with a Corinthian capital that rises from its depths surmounting a millstone. At the top there is a wooden beam spanning the Nilometer. To measure the Nile flood, this column is graded and divided into 19 cubits (a cubit is slightly more than half a meter, and hence, it was capable of measuring floods up to about 9.2 meters). The flood that this Nileometer measured was both important to the rulers of Egypt as well as the whole population. An ideal flood filed the Nilometer up to the sixteenth mark and less than this could mean drought and famine. On the other hand, if the measurement exceeds the 19 cubits, a catastrophic flood was at hand. In the days prior to the expected flood, this column would be anointed with saffron and musk in order to help induce a good water level.

Al-Rifai Mosque is similar to the mosque of Sultan Hassan in magnitude and height although the time lapse between them was about 500 years.

Al-Rifai Mosque is famous for the preciseness of industry and its large number of decorations.

Al-Rifai Mosque covers an area of 6,500 square meters. It competes with mosque of Sultan Hassan in greatness, and grandeur.

For some reasons the construction of the mosque had stopped from 1880 to 1905 until Khedive Abbas Hilmi II entrusted Khairy Ahmed Pasha, the Director of private Endowments, with the completion of the mosque and it was opened in 1912.