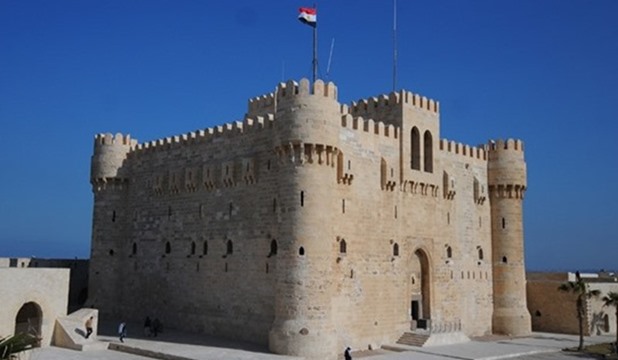 Alexandria is full of many Islamic monuments.

Qaitbay Citadel in Alexandria is considered as one of the most important defensive strongholds not only in Egypt but also in the Mediterranean Sea coast. It formulated an important part of the fortification system of Alexandria in the 15th century AD.

This citadel was established by the sultan Al Ashraf Abou Alnasr Seif Eldin Qaitbay Alzahiry. The citadel is situated at the entrance of the eastern harbor on the eastern point of the Pharos Island.

Parts of the remains of the lighthouse can be seen in the construction of the old fort. One of the seven wonders of the ancient World, the lighthouse was astonishingly 125m in height with approximately three hundred rooms at ground level, that were built for workers.

Running through the center was a double spiral ascent and hydraulic machine that raised fuel to the top. The lantern at the top of the lighthouse remains a mystery. Some say it contained a polished steel mirror that reflected light during the day and fire at night.

Others say it was made of transparent glass. The lantern and the top two stories fell around 700 AD according to many reports, and the rest of the lighthouse was destroyed by an earthquake around 1100 AD. In its place a Mosque was built, which was damaged by an earthquake in the 14th century. The entrance is through a gateway made of red Aswan granite. Located beside the mosque is a cistern that was used to store water in case of a siege. Also located inside the fort is the Naval Museum which contains artifacts from the Roman and Napoleonic sea battles.

This beautiful mosque, with its high minaret and four domes, is Alexandria's largest and one of the most important Islamic monuments. In 1775 the Algerians built the mosque over the tomb of the thirteenth century Andalusan saint Ahmed Abu al-Abbas al-Mursi who had joined and then lead the Shadhali brotherhood. The interior is made up of eight monolithic granite columns and a colonnade of elongated arches. It was rebuilt in 1943 with the domes and the towering (73 meter) minaret. It is one of Alexandria's foremost religious buildings and women are not allowed inside the mosque proper, but may only visit a room at the back of the mosque.

Mosque of Nabi Danial was built at the end of the 18th46 century.