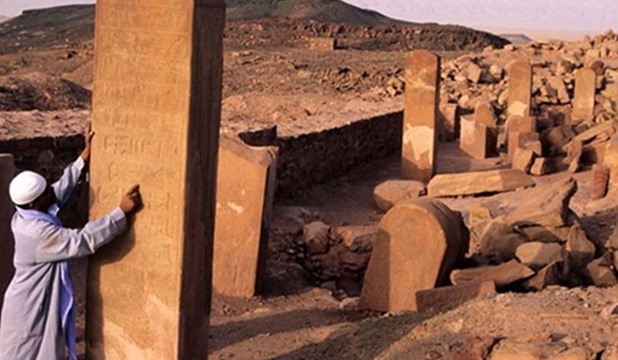 From the beginning of Egyptian history mining and smelting of copper led to an increased population in Sinai as colonizers began to move south and several sites have been found which were exploited from very early times. Systematic mining and quarrying began when the Pharaohs sent expeditions to investigate the area during the Early Dynastic Period.

One of the earliest indications of Pharaonic interest is an inscription on the east face of Gebel Maghara depicting Dynasty III King Sekhemkhet in the traditional smiting pose, first discovered by the English explorer E H Palmer in 1868. There are also inscriptions naming Kings Djoser, Sanakht and Pepy II of the Old Kingdom as well as Middle and New Kingdom rulers.

One of the best known and most important archaeological sites in Sinai is Serabit el-Khadim, on a highland east of the modern town of Abu Zenima. Turquoise, much prized by the Egyptians, was mined here at least from 3500 BC but most intensively during the Middle Kingdom as attested by inscriptions dating to the reign of Amenemhet II and III.

A rock-cut temple dedicated to the Goddess Hathor begun here in early Dynasty XII, is known as the ‘Cave of Hathor’, the goddess who is often named as ‘Lady of the Turquoise’. The earlier shrine was enlarged during the New Kingdom, mainly during the reigns of Hatshepsut and Tuthmose III and thousands of votive offerings and artifacts have been since recovered, including the famous head of a statuette of Queen Tiye, now in the Cairo Egyptian Museum.