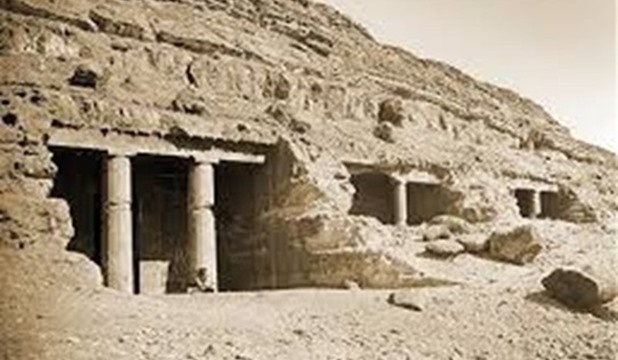 Minya province, is one of the 29 provinces of Egypt, the capital of the northern region, which includes (Minia Beni Suef, Fayoum) It extends on the River Nile with distance of 135 km and located in the meddle between the Upper and Lower Egypt.

Tell El-Amarna was formally known as Akhetaten. The new name came from a local village called El- Till. The word Amarna came from the Bedouin tribe that settled in this village. The word Tell, in Arabic, means a mound or a small hill. But interestingly enough, Tel El-Amarna is a flat piece of land beside the Nile Valley. The ancient name, Akhetaten, means the horizon of the solar disk. It is very similar to the meaning of Amun Dwelt at Thebes, Ptah at Memphis and other gods at their favored places. King Akhenaten offered this place to be the home for his god Aton. The area is a plain field, separated from the Nile Valley by a strip of palm trees. It stretches 12 kilometers from north to south. The area is covered mostly with sand and outlined with ruins of temples, palaces and houses that archeologists discovered or are trying to find. Some tourists considered it one of the most romantic places they have ever seen because of the silence and the peaceful beauty that the area gained through the centuries.

The site lies on the Eastern Bank of the Nile, 20 km south of the city of Al-Minya. It houses 39 rock-cut tomb decorated with scenes depicting local and regional life during the Middle Kingdom. Many of these have scenes of violent warfare and military training.

Tomb of Amenemhet (tomb 2): Amenemhet is described as the 'prince of the Oryx Nome' and was a governor of the Oryx nome. Here one finds one of two inscriptions within the necropolis that help define Egyptian life in this period. It consists of thirty-two lines on the door. There are also unusual scenes depicting hunting in the desert on the north wall. His tomb is unusual for having a false door on the west, where the dead are suppose to enter.

Tomb of Khnumhotep (tomb 3): A governor under Amenemhet III (about 1820 BC), Khnumhotep's is described as 'the hereditary lord' and his tomb is beautifully done with scenes of daily life. His biographical inscription within the tomb is 222 columns of text and helps define Egyptian life during this period. There are also acrobats over the door.

Tomb of Baqet III (tomb 15): If ever there was an imaginative person, the father of Kheti (see below) was one. A strange tomb with scenes depicting a hunt for unicorns, a serpent-headed quadruped, a 'Sethian' animal and a griffin. Apparently, the Egyptians felt that there were evil forces in the desert, and hunting their helped to preserve order. Others show wrestlers and gazelles involved in strange behavior.

Tomb of Kheti (tomb 17): During the 11th Dynasty, Kheti was a governor of the Oryx nome. The tomb has depictions of daily life during the period.

About two miles south is the Temple of Hatshepsut in an area popularly called Istabl Antar (Stables of Antar).