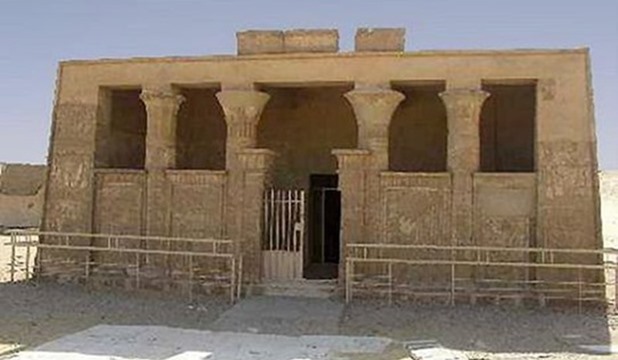 Tihna el-Gebel is a little-visited site on the east bank of the Nile to the north of el-Minya. It is perhaps best known for its Old Kingdom rock-cut tombs, the ‘Fraser Tombs’, but in the Graeco-Roman Period the site was an important town named Akoris.

The town itself was in Pharaonic times known as Dehenet, which is attested from the Old Kingdom, at which time there was a Temple of Hathor here. Another temple, built during the reigns of Rameses II and Merenptah has four chambers cut into the rock and originally had a pronaos or portico with four columns at either side of the entrance. The temple is poorly preserved, but damaged remains of Hathor-headed columns may still be seen in the dark interior. In front of the Temple of Hathor there are wide plain columns still standing and nearby there is Roman and Coptic inscriptions in ink on scattered blocks. A ramp was added during the Roman Period by the Emperor Nero.

Two more small Roman temples have only single chambers with statue niches at the rear. The temples are very high up in the rock above the town site and make this a dramatic site to visit, though a potentially dangerous one with deep shafts which seem to open up everywhere.

The town of Dehenet was enlarged during the Greek and Roman eras and given the name of Akoris. Remains of many high mudbrick structures can still be seen sprawling over the vast mounds which constitutes the domestic site today.

The Graeco-Roman necropolis consists of tombs cut high into the rocks above the area of the temples, around the side of the cliff to the right. These seem to be a mixture of both Egyptian and Greek styles and very elaborately decorated on their façades, some with life-sized reliefs of the tomb-owners. Several corn-mummies (funerary objects connected to Osiris) dating to the Late or Graeco-Roman Periods have been found in burials at Tihna el-Gebel. There is also evidence here that one of the tomb chapels was later re-used as an early Christian hermitage, as it has a cross cut into the statue niche in the rear of the tomb.