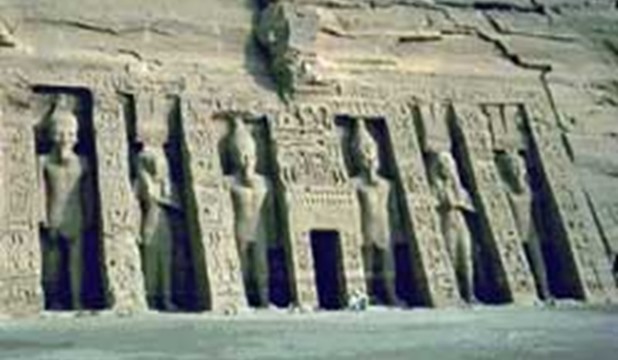 Not only are the two temples at Abu Simbel among the most magnificent monuments in the world but their removal and reconstruction was an historic event in itself. When the temples (280 km from Aswan) were threatened by submersion in Lake Nasser, due to the construction of the High Dam, the Egyptian Government secured the support of UNESCO and launched a world wide appeal. During the salvage operation which began in 1964 and continued until 1968, the two temples were dismantled and raised over 60 meters up the sandstone cliff where they had been built more than 3,000 years before. Here they were reassembled, in the exact same relationship to each other and the sun, and covered with an artificial mountain. Most of the joins in the stone have now been filled by antiquity experts, but inside the temples it is still possible to see where the blocks were cut. You can also go inside the man made dome and see an exhibition of photographs showing the different stages of the massive removal project.

The main temple was dedicated to Ramsis II and to the four universal gods Ptah, Re-Harakhte, Amun-Re, and to Ramsis II himself. Of the seven temples he built, Abu Simbel is considered to be the most impressive.

Above the doorway in a niche stands the sun god, a falcon headed representation of Ramsis, holding a war-scepter which shows the head and neck of an animal which is read as user, in his right and a figure of Ma'at in his left. This setup ingeniously creates the Kings Throne name of User-Ma'at-Re. At the top of the facade is a row of baboons which are thought to be greeting the morning sun and indeed the monument looks best at that time. The sides of the thrones next to the entrance are decorated with Nile gods symbolically uniting Egypt, while below are prisoners, representing conquered nations, to the left, African and to the right, Asian.


The entrance leads into a Grand Hall which is 57 feet high and 52 feet wide and was cut from the rock. It is supported with eight pillars with statues of Ramsis.


To either side of the Grand Hall are smaller rooms, two to the South and four to the North. Most suggest that these rooms were for storage (treasure rooms) but elsewhere it is suggested that they were used for festivals related to the Kings Jubilee.


Beyond the Grand Hall is the second hypostyle hall with its flowered pillars. Scenes in this hall show the King and his wife, Nefertari making offerings to Amun and Re-Harakhte (the Sun God), and beyond that is the three chapels, the central one containing the four deities worshipped in the temple (including Ramsis II).


The sun shines on the face of the statue on February 22 ‎and October 22 every year, the birthday and date of ‎the coronation of Ramses II.

Hathor was the wife of the Sun God so in a symbolic way, the two Temples, that of Ramsis II and that of Nefertari, brings Ramsis II and Nefertari and Hathor and the Sun God together as one. The facade of the temple is a receding Pylon, just as the larger temple of Ramesses II. On either side of the entrance to the temple is a deified statue of Nefertari with statues of Ramsis II on either side of her. The statues of Nefertari are the same height as those of Ramsis, which is unusual. Like at Ramsis II's temple, there are children depicted around their feet. There are cobras protecting the Temple door.


This temple is much simpler than the Temple of Re-Herakhte. It has only one hypostyle hall and the sanctuary. Within the hall are images of Ramsis in battle with Nefertari present. Other scenes depict Ramsis being crowned by Horus and Seith and presenting Ma'at to Amun. On the back wall, Nefertari is before Hathor and Mut. Just behind the Hypostyle Hall is a small chamber with images of Hathor cow framed in reeds. Beyond that is the sanctuary with a divine cow emerging from the rear rock wall protecting Ramsis, below her. Above the cow, vultures guard the Queens cartouches. Other scenes show Nefertari offering incense to Mut and Hathor, and the King worshipping before his own image and that of Nefertari.