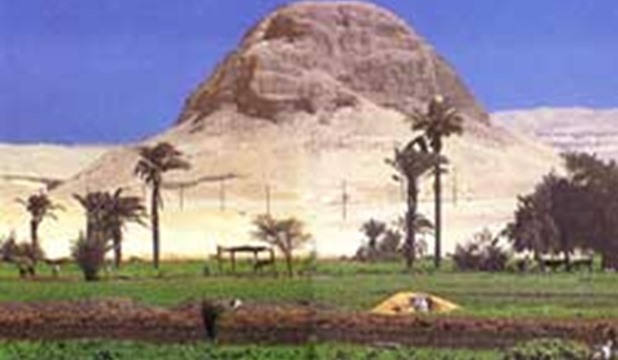 Originally named Crocodilopolis, then Arsinoe, Medinet El-Fayoum was the main place of worship of the crocodile god, Sobek. Apparently, during ancient Medinet, crocodiles were adorned with gold and fed honey cakes and meat by the priests. Of interest are the huge wooden waterwheels. The waters of the Bahr Yusef are distributed throughout the oasis from Medinet, the capital of the Fayoum. Approximately 200 of the great waterwheels are located throughout the oasis. The Seven Waterwheels, a Fayoum landmark, are surrounded by mangos, palms and willows. A great stone obelisk was erected in honor of Senwosret I in Abgig during the 12th Dynasty. It was discovered on the ground in two pieces during the 18th century and was recently reconstructed and erected in Medinet.
Keman Faris:

This is an ancient city built during the V Dynasty. It contains the cult center of the crocodile god, Sobek. During the Hellenistic Period, the name was changed to Crocodilopolis, and later to Arsinoe during the Ptolemaic period.
Lahun Pyramid:

The pyramid is almost on the halfway between Bani Suef and the Fayoum. This one is part of a funerary complex built by Senwosret II in the Middle Kingdom.

The pyramid is built of mud-brick and was once encased by limestone like many other pyramids. It had the sloping angle of 43 degrees and an original height of 48 meters (157 ft).

The entrance of the pyramid was discovered by Petrie in 1890 after hard search. The reason was that, unlike other pyramids where the entrance is usually at one side of the pyramid, this one had its entrance through a vertical shaft some distance from the pyramid in the south.

A small pyramid of the queen lies to the north of Senwosret's pyramid. Beside it there are 8 rock tombs of the royal family. Remains of the mortuary temple can still be seen to the east side.
The site has also an old city, Kahun, built for the pyramid builders about one kilometer (0.6 miles) away and the mastaba-tomb of the pyramid chief engineer.

The pyramid lies 10 km (6 miles) southeast of Medinet El-Fayoum of the road to Bani Suef. The 58-meters mud-brick pyramid is dilapidated. It lost its limestone casing by time. Originally it had the slope of about 50 degrees.

The pyramid was once part of a great mortuary complex built by 12th dynasty King Amenemhat III. The complex included the great funerary temple to the south also known as "the labyrinth."

The temple was once described as the greatest monument in Egypt as narrated by ancient historians like Herodotus and Strabo. When Greek historian Herodotus visited the temple in 5th century BC, he said it had 3000 rooms.

He went further on saying that the temple is surpassing the astonishing pyramids in its grandiosity. The structure started to diminish in Roman era and was used as quarry. When the site was excavated in the 19th century there were nothing left but rubbles.
To the north of the pyramid is a Greco-Roman necropolis where the famous Fayoum portraits were discovered. Those shed light on the classical art history.

The 13-meters high red-granite obelisk is cut by Senwosret I of 12th Dynasty. Originally, it was erected in a village called Abgig few kilometers/miles far from the Fayoum City.
Later, it was restored and re-erected at Medinet El-Fayoum's northern entrance.
Medinet Madi (Narmuthis):

The temple is about 30 km (19 miles) southwest of Medinet El-Fayoum. It was built by Amenemhat III and is dedicated to several gods. Reliefs show Amenemhat III with his son Amenemhat IV presenting offerings to the serpent goddess of harvest, Reneutet and God Sobek.
Ptolemies put several additions to the temple, particularly the sphinxes and lions that line the processional way.
Qasr El-Saghah and Dimai:

The two historic sites are to the north of Lake Qarun. The sites are best accessible by a 4WD vehicle and the first of them are about 30 km (19 miles) from Karanis.
The first temple Qasr El-Saghah dates to the Middle Kingdom of the Pharaonic era and is built of sandstone. The remarkable thing about it is that it contains 7 shrines. Little information is known about the circumstance of its construction. The site provides good scenery of the lake and the stretched desert.
Dimai temple lies to the south of Qasr El-Saghah. It is dedicated to God Soknopaios, a variation of God Sobek. It is established on an elevated land that was once an island in the lake but merged to the land after the water ebbed.
The ruined-city adjacent to the temple was once a port and a caravanserai. You can also approach Dimai site by a boat from the southern shore of the lake. You can do that by asking fishermen for the possibility and many would be ready to convey you across the lake to the site.