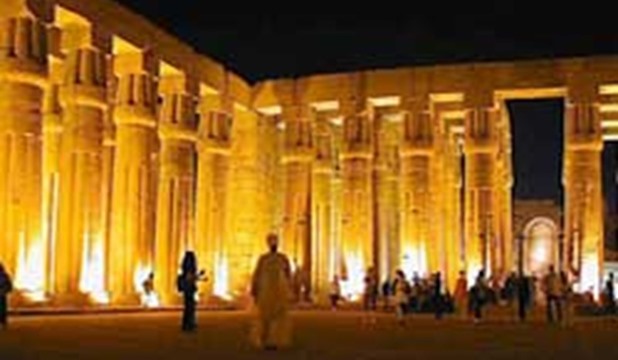 Luxor has often been called the world's greatest open-air museum, as indeed it is and much more. The number and preservation of the monuments in the Luxor area are unparalleled anywhere else in the world that we know of.

This was built by Amenhotep III as a private residence for god Amun, but Ramsis II later added statues of himself to either side of the temple: two seated and two standing. Inside there is an open coutyard built by Ramsis II, comprising a pillared colonnade; and a second courtyard by Amenhotep III with pillars decorated with papyrus designs. The Luxor Museum contains a remarkable collection of ancient Egyptian sculpture found during the course of restoration at the Karnak and Luxor temples.
Luxor museum:

It lies between the temple of Luxor and Karanak. The museum includes Pharaonic monuments collections which were found at Luxor City.

Built in the 20th century B.C., it is the biggest of the ancient Egyptian temples and was the seat of the god Amun, and the administrative capital of the country. A visit to the temple begins at the sacred quay, decorated with a Nilometer showing flood levels of the Nile and then passes through an avenue, bordered by statues of ram-headed sphinxes, to the temple itself. Inside the temple there is an open courtyard with a smaller temple on the left-hand side. Then there is a large hypostyle hall, built during the reigns of Seti I and Ramsis II, containing 134 pillars, twelve of which are topped with capitals in the form of open papyrus flowers.
Ramsis III Temple:

The entire Temple of Ramsis III, palace and town is enclosed within a defensive wall. Entry is through the Highgate, or Migdol, which, in appearance resembles an Asiatic fort. Just inside the Highgate, to the south, are the chapels of Amenirdis I, Shepenwepet II and Nitoket, wives of the god Amun. To the north side is the chapel of Amun.

These chapels were a later addition dating to the 18th Dynasties, by Hatsepsut and Tutmose II. Later renovations were done by the Ptolemaic kings of the XXV Dynasty.

To the west is the temple proper, which was styled after the Ramesseum. On the north wall of the temple are reliefs depicting the victory of Ramsis with the Sardinians, Cretans, Philistines and the Danu.


Close to the temple is the remains of a Nilometer. These 'flood warnings' were positioned strategically along the river to determine the position of the river every year. Not only did these register the height of the river, but also determined the amount of silt that was being deposited.

The Valley of the Kings:

This site contains a large number of tombs of the Kings and Pharoahs, including the tombs of: Seti I, Ramsis II, Horemheb and Tutankhamun, which was the only tomb to be discovered more or less intact.
a- Seti I Tomb:

The longest tomb in the valley, 100m, contains very well preserved reliefs in all of its eleven chambers and side rooms. One of the back chambers is decorated with the Ritual of the Opening of the Mouth, which stated that the mummy's eating and drinking organs were properly functioning. Believing in the need for these functions in the afterlife, this was a very important ritual. The sarcophagus is now in the Sir John Soane Museum, London.
b- Amenhotep II Tomb:
In this Tomb, a steep flight of stairs and a long unadorned corridor lead to the sarcophagus chamber. Three mummies, Tuthmosis IV, Amenhotep II III and Seti II, were found in one side room and nine mummies were found in another.
c- Tutankhamun Tomb:

The most famous Egyptian pharaoh is Tutankhamun. The boy king died in his late teens and remained at rest in Egypt's Valley of the Kings for over 3,300 years.

Tutankhamun's tomb was discovered in November 1922 by the British Egyptologist Howard Carter who was excavating on behalf of his patron Lord Carnarvon. His tomb almost escaped discovery and could have been undiscovered to this day.


Carter had been searching for the tomb for a number of years and Carnarvon had decided that enough time and money had been expended with little return. However, Carter managed to persuade his patron to fund one more season and within days of resuming the tomb was found.


The tomb still contains the pharaoh's remains, hidden from view inside the outermost of three coffins. He is the only pharaoh still residing in the Valley of the Kings.

The tomb itself is very small and appears to have been destined for someone of lesser importance. Tutankhamun's unexpected early demise saw the tomb's rushed modification to accommodate the pharaoh.


The first three chambers were unadorned, with evidence of early entrance through one of the outside walls. The next chamber contained most of the funerary objects. The sarcophagus was four gilded wooden shrines, one inside the other, within which lay the stone sarcophagus, three mummification coffins, the inner one being solid gold, and then the mummy.


Haste can be seen in the reliefs and the sarcophagus, due to the fact that Tutankhamen died at only 19 years of age following a brief reign. Though extremely impressive to the modern world, the treasures of Tutankhamen must have paled when compared to the tombs of the great Pharaohs that ruled for many years during Egypt's golden age.
The Valley of the Queens:

Temple of the Theban moon god Khonsu - son of Amon and Mut. He is often represented as a human headed figure wearing a crescent and disk. The temple was built by Ramsis III.
There is a regular pattern to New Kingdom temples which is usually set up to include at First a monumental pylon leading to an open court, surrounded by colonnades. Then a roofed hypostyle hall followed by smaller rooms leading to the sanctuary in which the image of the god was housed. They were called festival temples and were arranged to suit the processional ceremonies that were held within their walls.