Pharaonic monuments in Cairo and Giza 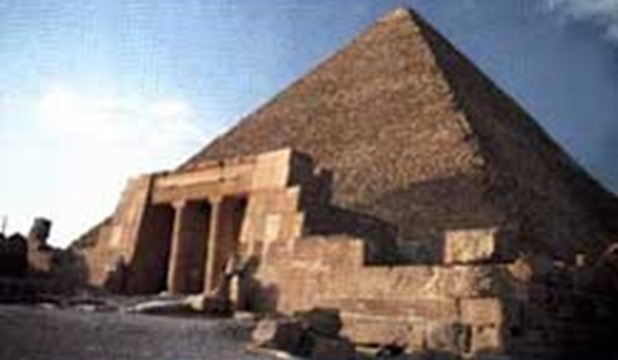 The Great Pyramids at Giza are the world's most famous monument. They are, without question, the icon most associated with the Egypt. They have been both the main destination for tourists and a source of imaginative thought to the world for over three thousand years. They are named Pyramid of Cheops (Khufu), Pyramid of Chephren (Khafre) and Pyramid of Menkaure.

Cheops was the second king of the 4th Dynasty and was the builder of the Great Pyramid of Giza. Khufu was succeeded by Radjedef, his son by a lesser wife, whose reign was abruptly ended. He was succeeded by Khephren, Khufu's son by Queen Henutsen. A miniature statue of Khufu is on display at the Cairo Museum. This is the only likeness of him known to be in existence.
How the Great Pyramid was built is a question that may never be answered. Herodotus said that it would have taken 30 years and 100,000 slaves to have built it. Another theory is that it was built by peasants who were unable to work the land while the Nile flooded between July and November. They may have been paid with food for their labor. The flooded waters would have also aided in the moving of the casing stones. These stones were brought from Aswan and Tura and the water would have brought the stones right to the pyramid. This pyramid is thought to have been built between 2589 - 2566 BC. It would have taken over 2,300,000 blocks of stone with an average weight of 2.5 tons each. The total weight would have been 6,000,000 tons and a height of 482 feet (140m). It is the largest and the oldest of the Pyramids of Giza.
Not much is known about Cheops (Khufu). The tomb had been robbed long before archeologists came upon it. Any information about him was taken with the objects inside the tomb. He is thought to have been the ruler of a highly structured society and he must have been very wealthy. He was buried alone in this massive tomb. His wives may have been buried nearby in smaller mastabas.

His birth name was Khafre, which means "Appearing like Re". He is also sometimes refereed to as Khafra, Rakhaef, Khephren or Chephren by the Greeks, and Suphis II by Manetho. He was possibly a younger son of Khufu (Cheops) by his consort, Henutsen, so he was required to wait out the reign of Djedefre, his older brother, prior to ascending to the throne of Egypt as the fourth ruler of the fourth Dynasty. However, there is disagreement on this matter. There is no evidence that anyone was ever buried in the main chamber.

No inscriptions have been found in the pyramid; however there is a sarcophagus in the main chamber. There are two entrances that lead into the pyramid which are placed one directly above the other. The most distinctive feature of Khafre's Pyramid is the topmost layer of smooth stones that are the only remaining casing stones on a Giza Pyramid.

The last major pyramid of Giza is the Pyramid of Menkaure, son of Khafre. Although much smaller than the other two pyramids on the plateau, the lower courses were originally encased in granite. It has three subsidiary pyramids and some of its Mortuary temple remains intact. The interior of this pyramid includes a room possibly for the burial of some of the king's family as well as the king himself. At the end of the steps leading to the opening, there are a few steps downward into the descending passageway. As the descending passageway ends we enter into the first antechamber. This room is relatively small and there is another opening at the far end. Both openings are flanked by a carved "palace facade" design, the first such carved relief seen in any major pyramid since that of Zoser. The opening at the end of the first antechamber leads to another passageway. End of this passageway is the opening into the next set of chambers. This next chamber is unique because it offers a view of the top of the vaulted ceiling of the main burial chamber through a space that you can look through at the far end.


The mortuary temple of the Menkaure complex is the most intact mortuary temple on the Giza plateau. It is made of core limestone and was originally lined with granite in its interior. The entrance corridor was made of mudbrick and leads to a large courtyard. The courtyard was also cased with mudbrick, though with an outer layer of limestone. An interesting feature is that there is a basin and drainage system at the center of the courtyard. A recessed portico is located on the western wall of the court; this has 6 red granite columns. At the west end of this is a long narrow sanctuary. At the south end of the portico is a passage that leads to annex structures that do not appear to have been finished. From the north end of the portico a passage leads to 5 small rooms. At the westernmost end of the temple is an offering shrine which is built right against the face of the pyramid. This may have had a false door, and was paved with red granite. Just east of this is a corridor containing 6 limestone pillars, this was most likely built later during the 6th dynasty.

Heliopolis' ancient Egyptian name was Iunu or On. It became known as Heliopolis, or the "city of the sun," during the Greek period. It is the origin of the Ennead, or Group of Nine Gods of creation, named the Heliopolitan Ennead, which is headed by the sun god Aten.
Heliopolis is situated on the northeast outskirts of Cairo amid well-cultivated fields. It is near El-Matariya, below the hill of El-Hisn. It is one of the oldest cities in Egypt. Heliopolis was the capital of the Third Nome of Lower Egypt.
From the Old Kingdom onward, Heliopolis was the spiritual and ecclesiastical center of the whole country. Now we only have remains of a granite obelisk erected by King Senusert the First. This obelisk was part of the temple of Re founded by King Amenemhat the First. Another obelisk was found earlier in this temple. It is now standing in the Piazza del Popolo in Rome. A few remains can be seen of the brick wall that once surrounded the city. Heliopolis also has tombs dating from different eras of Egyptian history.

Dahshur is located about 8km south of Saqqara. The site is dominated by the 4th dynasty pyramids of Sneferu, the Red Pyramid and the Bent Pyramid, which can be seen from the Step Pyramid. The Bent (South) Pyramid of Sneferu is located about 2km south. It is one of the rare pyramids were most of it's casing is still intact. This is considered the first true pyramid in Egypt.

In a depression to the south of Chephren's pyramid sits a creature with a human head and a lion's body. The name 'sphinx' which means 'strangler' was first given by the Greeks to a fabulous creature which had the head of a woman and the body of a lion and the wings of a bird. The sphinx appears to have started in Egypt in the form of a sun god. The Egyptian sphinx is usually a head of a king wearing his headdress and the body of a lion. There are, however, sphinxes with ram heads that are associated with the god Amun.

Saqqara is an immense necropolis (cemetery) just south of Cairo and west of the ancient city of Memphis of which very little remains. Used as a burial ground for thousands of years, Saqqara hides its secrets well under desert sands. Despite virtually continuous excavations for some two centuries, much of the area remains to be excavated. The site stretches six kilometers from north to south and more than 1.5 kilometers across at its widest point.

The site's best-known feature is the Step Pyramid, the world's oldest major stone structure. It was built in the 3rd Dynasty (around 2630 BC) for King Djoser.