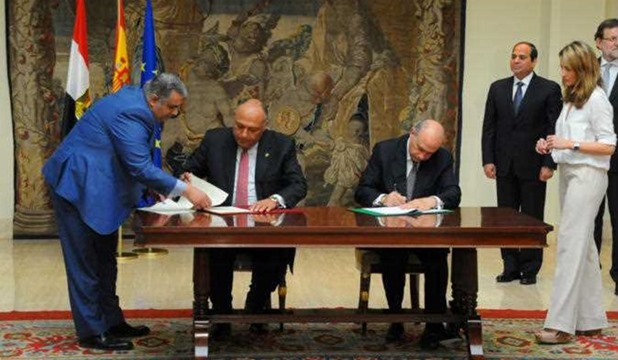 On 7/7/2017, Crans Montana Forum has bestowed on Investment and International Cooperation Minister Sahar Nasr the gold medal among five prominent personalities across the world. Egypt under the leadership of President Abdel Fattah El Sisi has taken positive steps toward enhancing its economy, a statement by the Ministry of Investment quoted the Founder of the Forum Jean-Pascal Delamuraz as saying. The forum chose Nasr for her development and investment efforts in Egypt as well as her contributions to achieving sustainable development and empowering women, he added.

The Egyptian minister thanked the forum for awarding her the medal, stressing her support for boosting cooperation between Egypt and the forum in the coming period.

On 22/10/2016, President Sisi met Spanish Minister of Foreign Affairs Jose Manuel Garcia-Margallo. The two sides discussed the recent regional developments, especially in Syria and Libya, the growing threat of terrorism, and the influx of refugees. Sisi and Margallo agreed on the importance of intensifying international efforts to reach political settlements for the region's crisis.

On 15/8/2016, Agriculture Minister Essam Fayed, during his visit to Spain, inspected greenhouses affiliated to Tecnova Research Center where experiments to fight insects and pests are being conducted.

On 10/5/2016, President Sisi met Spanish Defense Minister Pedro de Morenes. President Sisi voiced Egypt's keenness on promoting ties with Spain in all domains, particularly in the military one. During the meeting, the president stressed the necessity of stepping up international efforts to reach political settlements to the crises in the region.

On 28/10/2015, Army Chief of Staff Mahmoud Hegazi held talks with his Spanish counterpart and took part in the 7th meeting of the chiefs of staff of countries participating in the war on terrorism.

On 14/10/2015, Minister of Defense and Military Production General Sedqi Sobhi held talks with his Spanish counterpart Pedro Morenés and a number of senior officials to discuss promoting cooperation and ways to enhance military relations between the two countries.

On 3/10/2015, Head of the Judges Club judge Abdullah Fathy along with the Club’s delegation visited Spain to participate in meetings of the General Assembly of Judges International Federation in Barcelona and said they presented a detailed file on the critical and crucial terrorist crimes in Egypt.

On 30/4/2015, President Sisi met King Felipe VI of Spain, and held talks with him saying that the world needs an alliance for its peoples against extremism and hatred now more than ever. He noted that the cultural, educational and artistic ties between Egypt and Spain offer an environment conducive for promoting political and economic relations and setting up a trade partnership.

On 13/4/2015, Foreign Minister Sameh Shoukry met in Barcelona with his Spanish counterpart Jose Manuel Garcia-Margallo. They discussed bilateral relations and means to develop them in the cultural, economic and investment domains, as well as the outcome of Sharm El-Sheikh economic conference and the exchange of visits between the two countries' officials.

On 5/2/2015, Spanish Deputy Foreign Minister Ignacio Ibanez visited Egypt and met with Assistant Foreign Minister for neighboring countries' affairs Osama Magdoub. They discussed the latest developments in the Middle East. The two sides discussed the continued suffering of the Palestinians in the West Bank and Gaza Strip as well as the effort that should be exerted by the international community to practice more pressure on Israel to ease restrictions on Palestinians.

On 16/9/2014, Foreign Minister Sameh Shoukry visited Madrid to attend a conference on stability and development in Libya and North Africa. Shoukry held talks with his Spanish counterpart Jose Manuel Margallo. The talks took up bilateral relations and regional developments and other issues of common concern. He reviewed the efforts exerted by the Egyptian government to attain democratic transformation and render the economic and social development process a success. He also expounded measures adopted by the Egyptian government to attract more investments through removing obstacles in this regard.

On 27/7/2014, President Sisi received the Spanish Foreign Minister Jose Manuel Garcia-Margallo. Sisi congratulated the Spanish official on the accession of King Felipe VI to the throne after the abdication of King Juan Carlos. Sisi also expressed Egypt's keenness on more cooperation with the European Union in all different fields.

In September 2009, Foreign Minister Moratinos paid a visit to Cairo, at the beginning of his tour in the Middle East region, including Egypt, Syria, Israel and the West Bank to discuss the development of the situation in the region and to prepare for the tour which the Spanish Prime Minister would make in the region, in October 2009, where he met with the President and the Foreign Minister.

In May 2009, Egyptian Minister of Transport paid a visit to Europe including Madrid and Barcelona, where he met with the Spanish Minister of Transport, the Spanish Secretary of State for Trade Relations. He  addressed ways to benefit from the Spanish expertise in the  setting up  of an express train to link between Cairo, Aswan and Upper Egypt with the Red Sea and the building a tunnel north of the Suez Canal (south of Port Said), and in the field of Strategic Planning for infrastructure and transport as well, (Guided by the Spanish plan currently in force from 2005 to 2020); in addition to modernizing the Egyptian General Authority for Roads and Bridges, in the areas of planning, maintenance and safety of roads on the basis of participation between public and private sectors.

On April 4th - 8th , 2009, Minister of Culture, Cesar Antonio Molina visited Cairo   where he awarded Dr. Zahi Hawass, former Secretary General of the Supreme Council of Antiquities the Literature and Arts Medal in recognition of his career history and his contribution in the spreading of Spanish culture through introducing it to other States.  He opened an exhibition for monuments, to which the Spanish exploration missions contributed in its discovery, entitled "120  years of Spanish archaeological activity in Egypt".

On January 26th - 27th, 2009, Minister of agriculture participated in the works of the high-level Conference on “Food Security for all", held in Madrid, where he gave a speech pointing out the Egyptian efforts exerted to tackle the food crisis.

On January 18, 2009, Prime Minister Jose Luis Zapatero participated in Sharm el-Sheikh summit held to emphasize the Spanish support to the Egyptian effort aiming at reaching a compromise amongst the concerned parties.

On January 12th - 14th, 2009, Foreign Minister Miguel Moratinos visited Egypt in the framework of his tour to visit Egypt, Syria, Lebanon, Israel and the West Bank, with the aim of mobilizing support for the Egyptian Initiative within the framework of cooperation and coordination with EU countries and others.

On October 14th - 17th, 2008, the Embassy arranged a visit to a delegation  of experts in the fields of legislation and human rights at the institution of the Spanish People's Advocate (Ombudsman) to participate in a workshop hosted by the National Council for Human Rights, by the end of May 2009, in the framework of activating the cooperation accord signed between the National Council for Human Rights and the Foundation of the People's Advocate, during the visit of  Dr. Boutros Boutros-Ghali paid to Madrid.