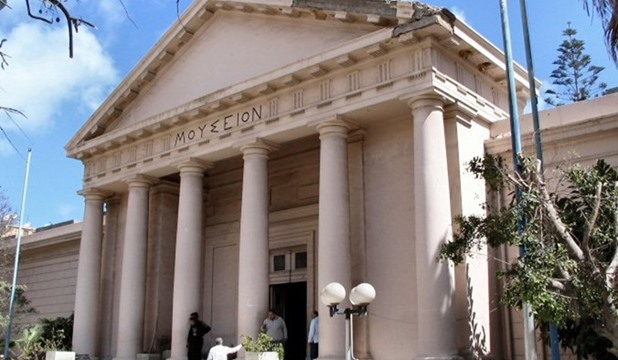 The second largest city and the main port of Egypt Alexandria was built by the Greek architect Dinocrates (332-331 BC) on the site of an old village, Rhakotis, at the orders of Alexander the Great. 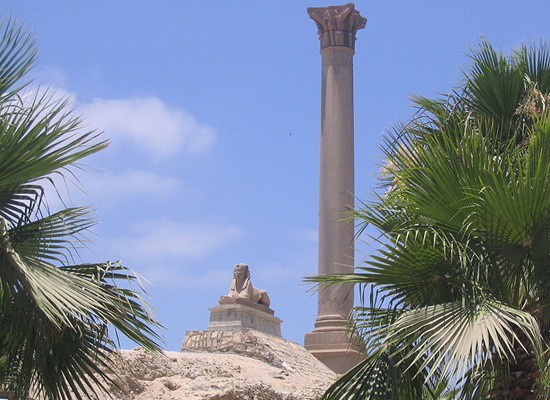 An approximately 25m red Aswan granite column with a circumference of 9m, was constructed in honor of the Emperor Diocletain. Originally from the temple of the Serapis, it was once a magnificent structure rivaling the Soma and the Caesareum. Nearby are subterranean galleries where sacred Apis bulls were buried, and three sphinxes. After his defeat by Julius Caesar in the civil war, Pompey fled to Egypt where he was murdered in 48 BC; mediaeval travelers later believed he must be buried here, and that the capital atop the corner served as a container for his head. In fact, the pillar was raised in honor of Diocletain at the very end of the 4th century. Diocletain captured Alexandria after it had been under siege. The Arabs called it "Amoud el-Sawari", Column of the Horsemen. The Pillar is the tallest ancient monument in Alexandria.
The Catacombs of Kom es-Shouqafa:
These tombs were tunneled into the bedrock in the age of the Antonine emperors (2nd century A.D.) for a single wealthy family still practicing the ancient religion. As a privately financed project, it is an engineering feat of some magnitude. These tombs represent the last existing major construction for the sake of the old Egyptian religion. They are alone worth the trip to Alexandria. Though the funerary motifs are pure ancient Egyptian, the architects and artists were schooled in the Greco-Roman style. Applied to the themes of Ancient Egyptian religion, it has resulted in an amazing integrated art, quite unlike anything else in the world.

A winding staircase descends several levels deep into the ground, with little chapels opening from it, furnished with benches to accommodate visitors or mourners bringing offerings. There are niches cutouts to hold sarcophagi. 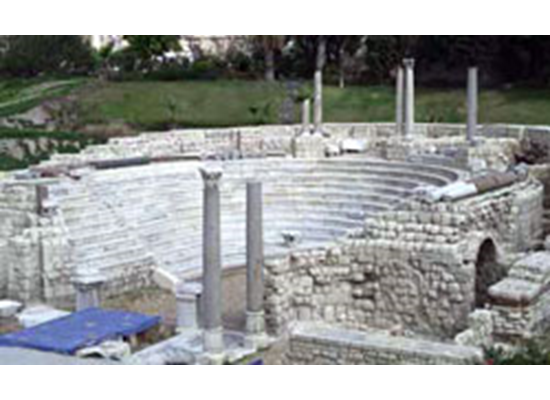 Over 30 years of excavation have uncovered many Roman remains including this well-preserved theatre with galleries, sections of mosaic-flooring and marble seats for up to 800 spectators. In Ptolemaic times, this area was the Park of Pan and a pleasure garden. The theater at one point may have been roofed over to serve as an Odeon for musical performances.

Inscriptions suggest that it was sometimes also used for wrestling contests. The theatre stood with thirteen semi-circular tiers of white marble that was imported from Europe. Its columns are of green marble imported from Asia Minor, and red granite imported from Aswan. The wings on either side of the stage are decorated with geometric mosaic paving. The dusty walls of the trenches, from digging in the northeast side of the Odeon, are layered with extraordinary amounts of potsherds. Going down out of the Kom, you can see the substantial arches and walls in stone, the brick of the Roman baths, and the remains of Roman houses.