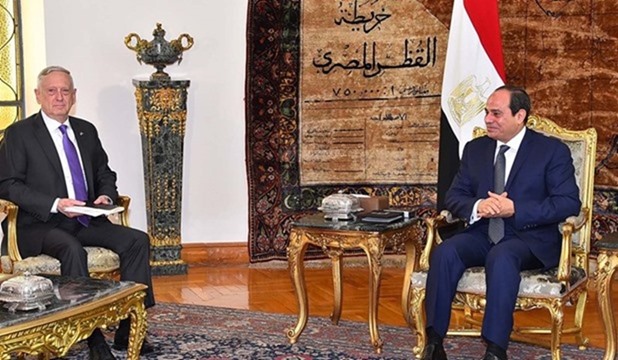 President Abdel Fattah El Sisi conferred on Saturday 2/12/2017 with US Defense Secretary James Mattis, in the presence of Minister of Defense Sedki Sobhi and a number of senior US military officials to discuss counter-terrorism.

Spokesman for the Presidency Bassam Radi said President Sisi stressed the strength of the Egyptian-US strategic relations, underlining the importance of boosting cooperation between both sides, especially at the military level.

Both sides tackled ways of achieving the common interests of the two nations, as well as discussing cooperation in counter-terrorism and restoring security and stability in the Middle East region, Radi said.

He pointed out that the two sides discussed the regional and international challenges, especially the fight against terrorism and extremism, with Sisi stressing the need to boost international efforts to uproot terrorism and to find political settlement to the crises in the Middle East region.

For his part, Mattis stressed his country's keenness to boost the relations and cooperation with Egypt in various fields, underscoring that Egypt represents the pillar of stability in the region.

He also reaffirmed his country's support for Egypt in its war on terror which threatens the region and the world, expressing his condolences over the victims of the terrorist attack that targeted el Rawda mosque in North Sinai.