Quds is eternal capital of Palestine 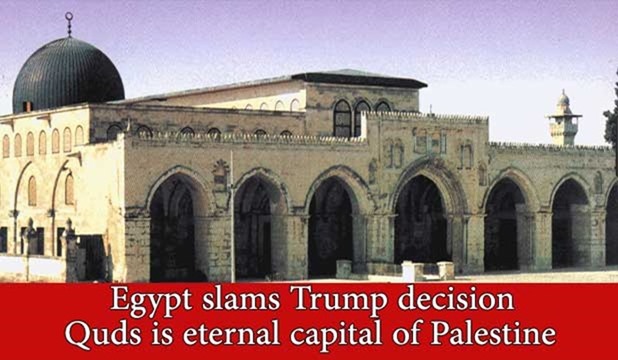 Egypt condemned on Wednesday December 7, 2017 the US decision to transfer headquarters of the American embassy from Tel Aviv to Quds.

In a statement, the Foreign Ministry said that Cairo will not recognize repercussions of the US move, saying that this unilateral decision violates UN resolutions and will not change the legal status of Quds as an occupied city.

Egypt is concerned about consequences of this decision, which would have a negative impact on the Mideast peace process and regional stability, the statement read.

Trump's decision would undermine efforts aimed at achieving just and comprehensive peace in the Middle East and establishing an independent Palestinian state with East Quds as its capital.

The two presidents discussed a decision planned to be taken by the US Administration to transfer the headquarters of the US Embassy from Tel Aviv to occupied East Quds, Presidential spokesman Bassam Reda said.

Sisi stressed Egypt's unshakable stance towards the legal status of occupied East Quds within the framework of relevant UN resolutions and international references on that score.

He also urged Trump not to escalate the situation in the Middle East through taking decisions that would undermine the peace process.

Meanwhile, House of Representatives condemned a US decision to recognize Quds as Israel's capital and to move the US embassy to the sacred city.

In a press release, the parliament warned of repercussions of this "unconsidered decision" that, it said, would undermine peace chances in the Middle East and the Muslim world.

Also, due to this decision, the conditions in the territories will deteriorate and terror attacks will increase, said the statement.

Egypt considers the Palestinian cause as the core of the Arab-Israeli conflict and the key to stability and security in the region, it added.

Al-Azhar Imam Ahmed el-Tayyeb warned of dangerous repercussions after a US decision to recognize Jerusalem as Israel's capital and to move the US embassy to the sacred city.

In a press release, Tayyeb blasted the step as "a denial of the constant Palestinian and Arab right in the sacred city".

"It is also a disregard for the feelings of more than 1.5 billion Muslims and millions of Arab Christians," he said.

The Imam stressed that the occupied city and its Palestinian and Arab identity must be a cause for all fair and wise people in the world so that the Palestinians and millions of Arabs and Muslims would not lose trust in the effectiveness of the international community and its institutions.

"Problems and wars faced by the Arab and Muslim worlds should not be a pretext and an excuse for standing idle and refraining from taking an effective action to prevent implementing this unjust and unacceptable decision," the grand Imam said.

He called for an extraordinary meeting of Al-Azhar's higher board and the Muslim Council of Elders to mull the repercussions of the US decision.