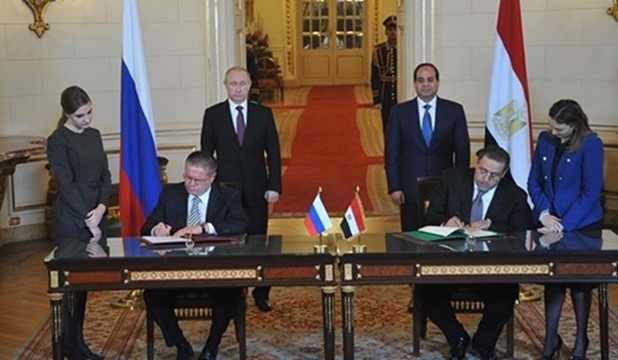 The High Dam is the culmination of the Egyptian-Russian cooperation as it is a giant witness to the depth of relations between the two countries.

Trade relations between the two countries went sour during 1990s, but in the wake of that period, economic relations were steadily increasing, especially in recent years.

The economic relations between Egypt and Russia have witnessed a remarkable development since President Sisi visited Russia in 2015.

Egypt's exports of fresh and frozen strawberries increased by 74 percent, electrical machinery by 76 percent, textile products by 44 percent, and exports of potatoes, onions and garlic by 117 percent and 145 percent respectively.

Russian investments in the Egyptian market amounted to 62.8 million dollars in 417 projects operating in the fields of tourism and service sectors, construction and communications.

In 2007, former President Hosni Mubarak announced the resumption of Egypt's nuclear program in the area of Dabaa.

On November 19, 2015, Egypt and Russia signed an initial agreement, under which Russia will build and finance Egypt’s first nuclear power plant.

Two agreements and a memorandum of understanding were signed between the two sides, the first agreement to cooperate in the establishment and operation of the nuclear power plant in Egypt, was signed by Sergy Krenka Chairman of “Ross Atom” for nuclear power plants from the Russian side, and Mohamed Shaker Almraqbi Minister of Electricity and Renewable Energy, from Egypt side, that in the presence of a number of officials of the Egyptian Nuclear Energy Authority, officials of the Russian company and Russia's Ambassador in Cairo.

The signing of a memorandum of understanding (MOU) between Nuclear and Radiological Supervisory Board from the Egyptian side and the Federal Environmental, Technological and Nuclear Supervision of Russia system from the Russia side, to cooperate in the peaceful use of nuclear energy.

The MOU was signed by Vice President of Nuclear and Radiological Control Authority in Egypt, Walid Ibrahim Zidan from the Egyptian side and the Vice president of the Federal Environmental, Technological and Nuclear Supervision of Russia system.

Among the most prominent agreements signed between Egypt and Russia:

1- On 2/2/2016, Prime Minister Sherif Ismail witnessed the signing ceremony of three cooperation agreements between the Egyptian and Russian ministries of industry, tourism and aviation.

A- The first tackled the establishment of a Russian industrial zone in Egypt.

B- The second is a memorandum of understanding for investment cooperation involving the National Bank of Egypt, Bank Misr and the Russian Direct Investment Fund.

C- The third is on cooperation between two companies from both countries.

2- On 10/2/2015, President Abdel Fattah El Sisi and visiting Russian President Vladimir Putin witnessed the inking of a number of investment cooperation agreements between the two countries. The two leaders also witnessed the signing of a deal to establish a nuclear-operated power plant.