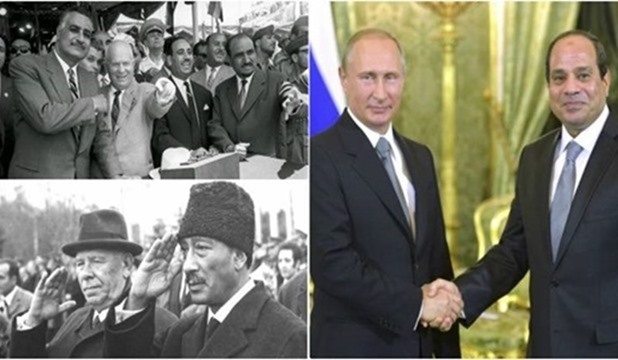 Diplomatic relations between Egypt and the former Union of Soviet Socialist Republics (USSR) were established on August 26, 1943. The first step taken towards cementing cooperation between the two countries was the signing, in August 1948, of an economic agreement to barter Egyptian cotton for cereals and lumber from the USSR. Other steps followed; i.e. the modernization of the Egyptian Armed Forces, the building of the High Dam and the establishment of numerous industrial plants (e.g. Naga'a Hamadi Aluminium Plant; and extending electricity lines from Aswan to Alexandria). There are 97 industrial projects were completed with the contribution of the USSR.

In 1991, Egypt was the first country that established the diplomatic relations with the Russian Federation after the collapse of the former USSR, where the political relations between the two countries developed at the governmental and parliamentary levels.

Russia has expressed its support to the June 30 Revolution and its subsequent developments in all the road map. So, Russia supported Egypt's strong return to the regional and international arena, its participation in all regional initiatives and resisted any attempts to marginalize the Egyptian role. Especially in the Syrian crisis and Gaza crisis, which came to demand the inclusion of Egypt to the International Quartet to activate the role of Egypt.

The political talks between the two countries were held in the form of «2+2», making Egypt the only Arab country to adopt this formula with Moscow, where Russia adopted this formula with other five countries, namely the United States of America, France, Italy, the United Kingdom and Japan.

These challenges undermine the political stability and threaten the national security of both countries. The two countries have a unified vision in facing terrorism and achieving a common interest in supporting economic growth  and complementary economic opportunities in the two countries.