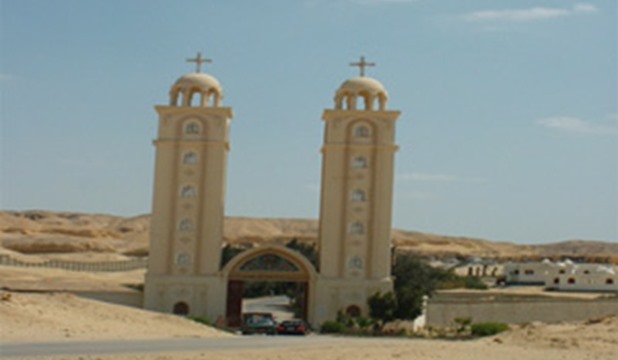 Due to the canals, in the area, Medinet El-Fayoum has been called the Venice of Egypt. The city of close to half a million people was first known as Crocodilopolis, and later Arsinoe, and has a substantial Coptic presence.

The nearest monastery to Fayoum City, is reached by heading 5km out along the Beni Suef road, and turning left at a fork; the monastery is on the right after just over a kilometre. Founded during the twelfth century and recently rebuilt sans style, the "Bachelor’s Monastery" no longer houses monks, but draws many Coptic visitors on Fridays and Sundays, and also holds the Moulid of the Virgin (Aug 15-22). It’s the burial place of St Abram, the revered Bishop of Fayoum and Giza between 1882 and 1914, whose portrait is said to reach out and shake hands with blessed visitors.

Al-Azab Monastery in Al-Azab village, 8 km south of El-Fayoum. It is called the monastery of Saint Abram because it contains his remains. The monastery includes an old and a new church, the shrine of Pope Abram and a Coptic Museum.
Deir El-Malak Ghobrial (Monastery of Archangel Gabriel):

On the Naklun Mountain 16km south of El-Fayoum. The monastery was probably built in the 7th or 8th century. The chapel, dedicated to Archangel Gabriel, was built only a century ago.

The remoter, more picturesque Deir el-Malak (Angel Monastery) squats on a desert hillside overlooking the cultivated lowlands, a single monk in attendance. Pilgrim buses may turn up for the Moulid of Archangel Gabriel (Dec 18), but otherwise it’s very quiet. Wolves have been known to make their dens in the hillside caves; from the ridge you can see the Lahun gap, and sometimes the Lahun and Hawara pyramids. Service taxis for Qalamsha run past a yellow stone barn in the village of Qalhana, whence a dirt track leads to the monastery.