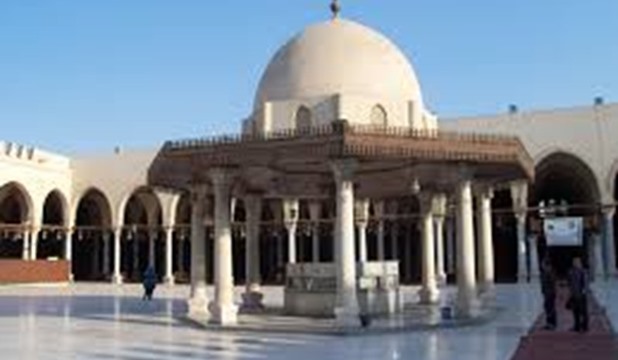 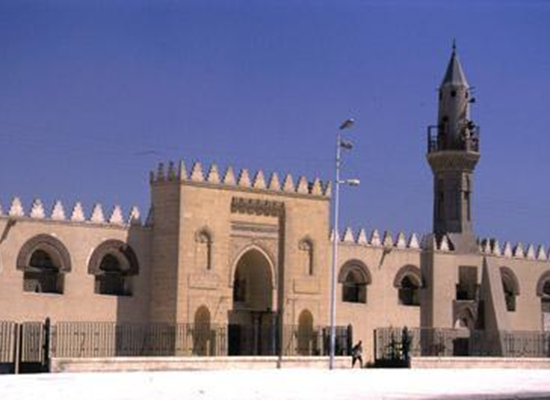 Amr was the Arab general who conquest Egypt to fight against the Romans and he was hailed by the Copts as a liberator. Then he was appointed governor by the Caliph. Amr founded a new capital instead of Alexandria, and that was Al Fustat.


In the center of Al Futat was the mosque which was named “The Mosque of Amr” It was surrounded by the plans and houses of Al Fustat. Originally the mosque was overlooked the Nile from the Northwest side.


The mosque was called “the Crown of the Mosques” and the Antique Mosque. In fact the actual features of the mosque are very different of its ancient aspects. Many reconstructions and restorations took place since the time of its foundation. 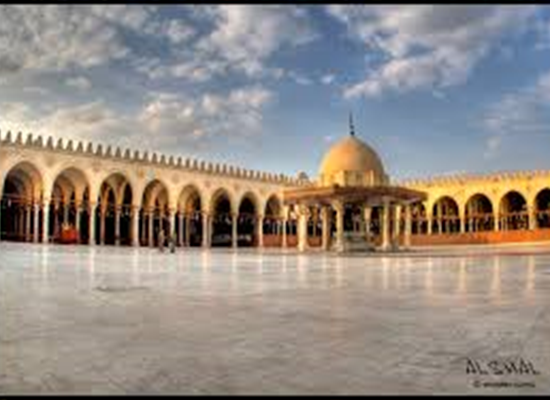 The mosque was built in a shape of rectangular low shed of wood and palm leaves supported on columns of palm stems, stones and mud bricks while the floor was covered with gravel. That first simple mosque measures about 29 m. in length and 17 m. in width.


Since the time of the foundation of the mosque many additions and extensions took place, but the most important one was made by the governor Abudllah Ibn Taher during the reign of Caliph Al Mamoun in the 9th century. He extended the mosque adding a new area at the S.W side and that extension was the last one. 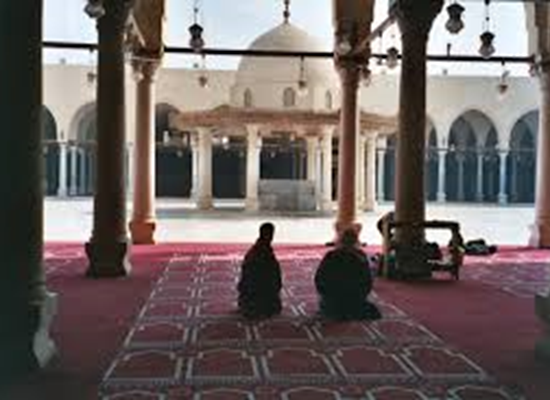 Thus at that time the mosque measures 120 m. in length and 112 m. in width and that represents the actual area of the mosque. At the end of the Fatimid period, the mosque was ruined as a result of Al Fustat Fire which took place in 1175 AD. When Al Fustat was burnt by Shawer, the Vizier of the Fatimid Caliph Al Adid, to prevent the crusaders from invading Al Fustat , and that fire continued 54 days. Therefore Saladin rebuilt it and renovated it in 1179 AD.

Just before the arrival of the French Expedition to Egypt Mourad Bey one of the Mameluke leaders in the end of the 18th century demolished the mosque and rebuilt it in 1796 AD. Mourad Bey changed the Iiwan and the courtyard replacing the seven rows of columns in the quibla liwan with 6 ones and changing the bays to be perpendicular to the quibla wall instead of being parallel to it.

Most probably he built the remaining minarets, one above the right entrance in the façade and the other is situated above the right end of the quibla wall. He renovated the ceiling, and covered the floor with mats and provided the mosque with candelabras. Also he made 4 foundation tablets still existing, bearing poetic verses praising and dating his achievements. One of these tablets is fixed to the quibla wall to the left of the Mihrab.

In 1906 during the reign of khedive Abbas Helmy II, the mosque was restored entirely. These works were achieved by the Arab Antiquities Preservation committee.


At the Southern corner of the quibla Riwaq there is a Mausoleum below a dome, Perhaps it belongs to Abdulla the son of Amr, some Historians can not confirm that, they believe that no honorable figure was buried in that Mausoleum.


One of the most remarkable facts about that mosque, that it was not only a place for prayer but also a very important kind of university 600 years before the foundation of Al Azhar mosque in Cairo.


It was the place where religious lectures were held. One of the most important Religious professors and Imams who taught in this mosque, was the Mohamed Ibn Idris Al Shafi'.

Finally we should mention that in the Western addition (Ziada) there was used as a court of law and many trials were held.