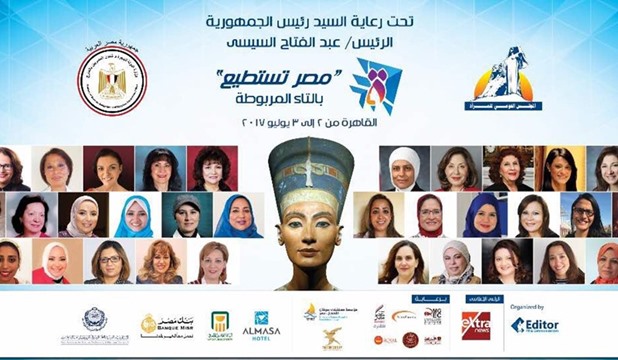 The celebration of the Year of Egyptian woman is a chance to contemplate her achievements which are accomplished only through the role women play for the sake of the prosperity and development of their country. The Emblem of the Year signifies the demand for change and acceleration of efforts exerted by women and the exceptional roles they are assigned with to make the history of their country and community. So, within the framework of the political leadership ‘interest in the role played by women in all fields either political, economic or social ,President El Sisi declared the year 2017 as the  Year of Egyptian woman. This resulted and encouraged enhancing women role during the year 2017.This was highly signified in the following:-
Dr. Marwa El sahn the first woman assigned  to the position of Governing Board Member of the International Federation of Library Associations and Institutions (IFLA) for  2017-2019:-
Dr. Marwa El Sahn – director of francophone activities center in Bibliotheca Alexandrina won the membership in IFLA from 2017-2019 as the first Egyptian woman and the second Egyptian representative assigned to such international position on the Arab region.
Dr. Malak Zalouk - the first Egyptian woman to preside over the Unesco Institute for Life Long learning:
Head of the Middle East Institute for Higher Education at American University in Cairo (AUC) professor, Malak Zaalouk, has been selected as the head of the UNESCO Institute for Lifelong Learning, making her the first Egyptian to be elected to the position.D r. Zalook was also the first woman to join the Board of the Institute in 2012
Bahia Shehab First Arab Woman to Win UNESCO-Sharjah Prize for Arab Culture:-
Bahia Shehab was awarded the UNESCO-Sharjah prize in April 2017 to become the first Arab woman to ever receive the prize since its launch in 2001. Irina Bokova, UNESCO Director General awarded her the prize in a celebration held at UNESCO headquarter in Paris.
Seven women assuming managerial positions in Banks:-

Experience, efficiency and responsibility are the principal criteria that controlled the assignment for managerial positions in banks. This came in the banking amendments made on the light of gender equality .Seven ladies achieved the posts of Board members in five banks two of which got executive posts: Dr Sahar El Damaty as a deputy to Misr Bank and Dalia El Baz as deputy to Ahly Bank,the other five ladies are Sahar ElSalab as for the membership of Ahly Bank, Hala Bassiouny for Real Estate Bank, Reham Moustafa for Misr Bank, Amal Esmat for Cairo Bank and Iman Ismail for the Workers and Industrial  Development Bank.
Dr. Amani Asfour wins the presidency of the International Federation of Business and Professional Women:-

In November 2017  Dr. Amani Asfour- Chairperson of the Business Council of COMESA won chairmanship  of the International Federation of Business and Professional Women, hence becoming the first  Arab and African Woman to be elected and chairs this organization.
Dr. Sahar Nasr and Dr. Ghada Wali among the strongest ten Arab Women in the Government Sector:-

- Egyptian participation in the World Economic Forum "Davos" 2017
- On 19 January 2017, Dr. Sahar Nasr, Minister of International Cooperation participated in the session of the Women's Parliamentarians' Forum and the World Women's Leaders Council at the Davos World Economic Forum in Switzerland.
- International Medical Conference on Arab Women's Health (28 February - 1 March 2017)
- The Ministry of Health and Population announced the launching of the International Medical Conference for Arab Women's Health under the slogan "Your health is our priority", which includes the launching of the Cairo Declaration on the 2017 Arab Women's Year, on the sidelines of the Conference of Arab Ministers of Health held from 28 February to 1 March under the auspices of President Abdel Fattah al-Sisi.
- The First International Conference on Women in Science without Borders "Women in science in sustainable development"
- The First International Women's Conference on Science Without Borders was held on 21-23 March 2017 under the title "Women's Role in Science in Sustainable Development".
- The conference of”  “Egypt can  ...by women”  under the auspices of President Al-Sisi, attended by 31 Egyptian women holding important leadership positions all around the world  and it was held  in July 2017.
- Conference on "Egyptian Women “ in light of 2017 Population Census"
- It was held on 12/10/2017 at The National Council of Women under the title "Egyptian Women in light of the 2017 census data - Egyptian Women's Observatory" in cooperation with the Central Agency for Public Mobilization and Statistics.
- The launch of the” Women leading the Future program”, organized by Ahli United Bank under the auspices of the Central Bank of Egypt, the National Council of Women and the Forum of the 50th, is part of a joint agreement, the first of its kind among government institutions. It is mandated to graduate women cadres qualified for leadership in various sectors of the state.